A Florida Observer Writes On The Myth Of White Rage 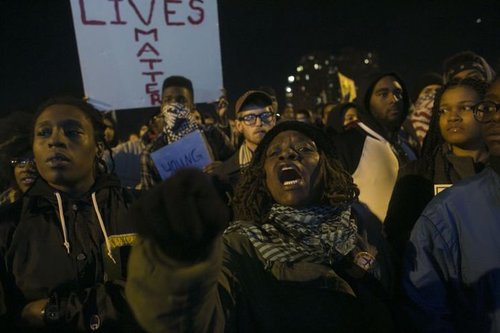 This is the main illustration for an article about white rage

Logic and science are not common parts of African-American culture and education, allowing ample room for misdirection as newly minted black “intellectuals” besiege readers of newspapers and other liberal media outlets.

Their defense of wild and crazy reactions by black mobs protesting the deaths of criminals in Ferguson and New York are harbingers of a new era of racial anarchy by unthinking but highly tribal mobs. Remember the “flash mobs” of the past four years or so because these are solid evidence of black rage and criminality.

The November 30 edition of the ultra-liberal Tampa Bay Times contained an editorial section called Perspective that was dominated by feverish black “commentators” whose racial bias was front and center. The Empty Black Suit syndrome is upon us. One black “intellectual” was Carol Anderson, a professor of African-American studies at Emory University whose imposing article was entitled “The ROOTS Of RAGE.”

Dr. Anderson [Email her] has apparently located a long stream of white rage endemic to America and fully responsible for almost all problems faced by blacks today. The phrase “white rage” appears twelve times in her article.

Protests and looting naturally capture attention. But the real rage smolders in meetings where officials redraw precincts to dilute African-American voting strength or seek to slash the government payrolls that have long served as sources of black employment. It goes virtually unnoticed, however, because white rage doesn't have to take to the streets and face rubber bullets to be heard.

Anderson lists the recent loosening of the Voting Rights Act’s grip on the South, white support of Three Strikes laws, Stop and Frisk, and the Great Recession of 2008 as evidence of white rage.

She informs us of a recent study showing whites are widely afraid of high crime rates in America’s cities. How is this fear a form of white rage? White Americans who do not fear black crime are uninformed and vulnerable. Police are the last barrier in civil society against the vast amount of black dysfunction and crime. Lastly, the Great Recession of 2008—far from being based upon white rage—was the creation of governmental and banking experiments in mortgage loans utterly lacking the common-sense criteria used historically by America’s banks.

There is in fact, very little white rage, except on the fringes of White Nationalism, but rage is part of the black mainstream, as seen by the number of people they can bring out to riot.