The above photo, of black female West Point cadets raising their fists (and a sword or two) in support of BLM was taken in 2016.

Sign of the times: Much-touted Biden VP possibility Senator Tammy Duckworth (D-IL), a former Army lieutenant colonel, has announced it’s time to send the Father of Our Country down the memory hole.

Democrat Senator Tammy Duckworth says she is open to tearing down statues of George Washingtonhttps://t.co/Q7VUX6Jame pic.twitter.com/zJiSgOlYpr

And she roasted President Trump for speaking at Rushmore, “land stolen from Native Americans.” Duckworth’s comments are symptomatic of our Woke military leadership’s increasingly open distaste for the Historic American Nation. So what’s President Trump going to do about it—especially given that most combat troops, as opposed to uniformed bureaucrats, are white Southerners?

Let’s look at the latest from the Pentagon:

Last week, Gen. Mark Milley, chairman of the Joint Chiefs of Staff, told Congress that he supports renaming bases honoring Confederate generals because they symbolize “treason” and their names offend  non-white soldiers [Top general: US military needs to take 'hard look' at Confederate symbols, by Rebecca Kheel, The Hill, July 9, 2020]. Trump to his credit opposes that, but the Pentagon is preparing to ban the Confederate Battle Flag from all military facilities. The U.S. Marines have banned the flag, and so has the commander of U.S forces in South Korea. Gen. Robert Abrams claims it “has the power to inflame feelings of racial division” [Pentagon drafting ban on displaying Confederate flag at bases, by Barbara Starr, CNN, July 6, 2020].

Wright has nothing to fear, of course, but Goldfein enthusiastically became his wingman. Wright’s entire Twitter feed for the past several weeks has been entirely about race and Black Lives Matter. 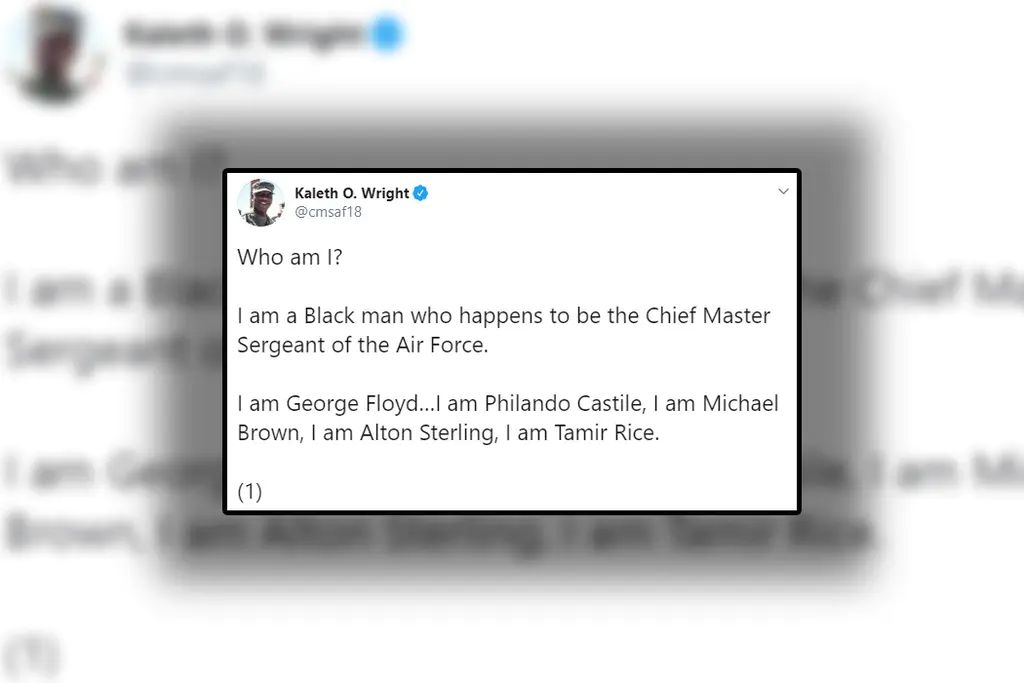 Of course, all these serving personnel should have been court martialed. But their “leadership” is coming from the top.

And finally, after weeks of pro-BLM anarchy, Joint Chiefs of Staff Chairman Milley ran up the white flag and backed the riots in the same testimony that bayoneted Confederate heroes:

The protests that have ensued [after George Floyd’s death] not only speak to this injustice, but also to centuries of injustice towards Black Americans. We, as a nation and as a military, are still struggling with racism, and we have much work to do.”

This is a blatant intervention in domestic political debate. But none of this will shock anyone who’s been watching the U.S.  military. Its elite top commanders mouth that diversity is the core strength of the military even if they don’t believe it. They know how to stick a finger into the wind. “Equality and opportunity are matters of military readiness, not just Political Correctness,” Milley testified. The official U.S. Army website declares “America's diversity is our Army's strength.” 13 years ago, Army chief of staff Gen. George Casey’s main concern after Muslim jihadist and Army Maj. Nidal Hasan murdered 14 people at Fort Hood wasn’t that Muslims might constitute a fifth column inside the military, but instead that a “backlash” against Muslim soldiers would mean “our diversity becomes a casualty.”

The military also actively recruits immigrants for the service and expedites their naturalization. Our generals ignore the lessons of the Roman Empire in relying on corps of foreign helots to fight its wars.

No doubt inadvertently, the military’s diversity programs are aiding and abetting miscegenation. Interracial marriage is much more common in the military than among the general population, and small towns near military bases report some of the highest interracial marriage rates in America [In U.S. metro areas, huge variation in intermarriage rates, by Gretchen Livingstone, Pew Research Fact Tank, May 18, 2017]. Of course, the military can appear to make integration work because it can exclude lower IQ recruits.

Of course, our military academies are corrupted too. Last month, top West Points grads wrote a letter to demand the military academy do more to fight “racism”:

The United States Military Academy has not taken the necessary strides towards uprooting the racism that saturates its history. We are calling upon West Point and its leadership to redress three major failures:

Significantly, two-thirds of the letter signers were women and at least two thirds are  non-white i.e. this is not the West Point that won World War II.

But instead of dismissing the letter as the work of insubordinate junior officers, West Point announced it was conducting a thorough review of racial issues at the academy [As nine alumni highlight racism at West Point, the academy’s IG starts review of ‘all matters involving race’, by Kyle Rempfer, Army Times, July 8, 2020].

But remember: While the military brass obsesses about diversity and eliminating “systemic racism,” it’s whites who still do most of the fighting and dying. 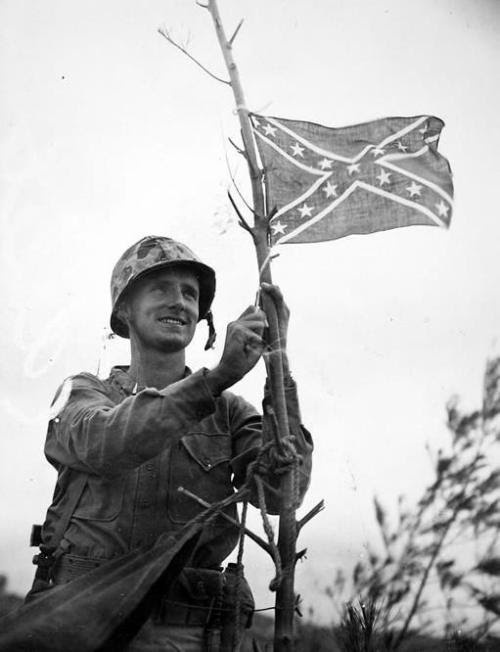 Our Woke military brass choose not appreciate the Historic American Nation’s heroic sacrifice, let alone appreciate the Southern boys whose heritage those leaders betray, although the states of the Confederacy are the country’s major contributors of men to the armed forces [Demographics of the U.S. Military, by George M. Reynolds and Amanda Shendruk, CFR.org, April 24, 2018]. Lt. Gen. Simon Bolivar Buckner Jr., whose father was a Confederate general, was one of three highest ranking Army officers killed in World War II. Now, the flag his father fought under and that flapped over Shuri Castle on Okinawa (pictured at right) during the battle in which he was killed, is verboten [Okinawa Confederate Flag, by Philip Leigh, Abbeville Blog, April 6, 2018].

America’s armed forces have turned into a Woke social experiment during the past 30 years because of Leftist Democrats and the cowardly Republicans who failed to stop them. Women now serve in combat, despite a presidential commission’s recommendation in 1992 that women remain exempt from such duty, and the Marine Corps’ strongly opposing including women in the combat arms 24 years later [Marine Corps debate over women in combat continues to roil, by Lolita C. Baldor, Associated Press, January 8, 2016]. The military ended “Don’t Ask, Don’t Tell” and allows homosexuals to serve openly, although everyone knows/ hopes this will be disastrous. Attempts to push the “transgendered” into service continue, but at least Trump administration is fighting on that bizarre front [Year after trans military ban, legal battle rages on, by Julie Moreau, NBC News, April 11, 2020]. And, as the West Point letter shows, many of the loudest advocates for the Woke measures are, of course, female officers, including lesbians.

The military claims diversity and inclusion make it stronger, but the numbers say otherwise. Eighty-four percent of women service members and 30 percent of men have failed the Army’s new, gender-neutral physical fitness tests [Men and Women Seeing Different Failure Rates on Army's Gender-Neutral Fitness Test, by Matthew Cox, Military.com, October 15, 2019]. The intelligence of military officers has also steadily declined since 1980 [Understanding the steady and troubling decline in the average intelligence of Marine Corps officers, by Delaney Parrish, Brookings Institution, July 24, 2015]. Could that be because the officer corps is less white?

Our new Woke military will become a national security threat if something isn’t done to curb its push to adopt “anti-racist” policies and its insane obsession with “diversity and inclusion.” The commander in chief—that would be President Trump—can start by sacking any senior officer who refuses to carry out an order to quell such violence.

As Gene Hackman’s character said in Crimson Tide, the military does not practice democracy, it defends it. The command in chief should remember that, and compel the Joint Chiefs and their service commanders to get in line or retire.