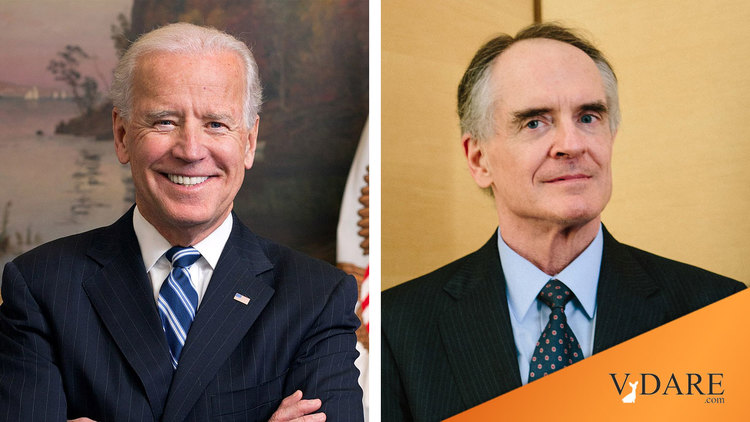 Earlier: The Sin Of SULLIVAN: Why Donald Trump, Tulsi Gabbard and I Are Suing For Libel

The New York Times is hostile to free speech. Last year, it published a column with the title “Free Speech is Killing Us.” Nor is the Times friendly to whites. Onetime editorial board member Sarah Jeong complained—among many other things—about “dumbass f**king white people marking up the internet with their opinions like dogs pissing on fire hydrants.” You get used to “The Grey Lady’s” quirks, but even I was shocked when she toyed with the idea of an official government “Reality Czar”  to tell us what’s true and what’s not.

Apparently, too many Americans believe the wrong things. The Times worries that about 40 percent of Americans reportedly believe the “baseless theory that Covid-19 was manufactured in a Chinese lab.” Baseless? The Associated Press reports that China is restricting information, and last month, the Chinese stopped World Health Organization officials from entering the country. New York magazine discussed the possibility of a “lab leak” a few weeks ago [The Lab-Leak Hypothesis, by Nicholson Baker, January 4, 2021].

Several “experts” explained to the Times how to protect us from “misinformation”: change social media algorithms so “civil rights lawyers” can tune them, use “de-escalation” (really re-education programs) against members of “extremist groups,” and apply a “comprehensive threat assessment” against “white supremacist groups and far right militias.”

These “experts”—mostly academics—don’t necessarily want a law that would let the government designate domestic terrorist groups because it might “end up harming religious and ethnic minorities.”

Even the author calls the idea of a Reality Czar “a little dystopian.” The czar would work with tech companies to manage content. It would be government censorship with a middleman. If the greatest philosophers still struggle with what is true and what’s not, I certainly don’t trust journalists and federal agents.

Perhaps the Times is right, and people can’t be trusted to make up their own minds. If that’s so, we should abolish voting. It’s dangerous if citizens can’t even be trusted to read the newspaper. If we need a “reality czar,” it would be simpler to scrap the democratic pretense and have a real Czar.

A few years ago, the late Christopher Hitchens bravely defended free speech in Canada, where it no longer exists. The law, he said, required that someone decide what people could and could not see. “To hell with that law,” he said.  He asked if anyone in the audience thought he needed to be sheltered from books. No one did. Many people want to deplatform opponents, but no one wants to imprison his own mind. Could Hitchens give that speech today?

We need free speech not just because we value an abstract right. We need it because we are right and they are wrong on the most important issue in the world. The Regime is repressing white advocates. The justification is that this prevents violence. However, white nationalist terrorism is barely worth mentioning. The ADL’s report on “extremist terrorism” was mostly fabrication and dishonesty, linking “white racism” to cases that had nothing to do with it.

Some accuse Donald Trump and white advocates of using media to encourage “lone wolves” to commit attacks. This assumes these terrorists can understand coded attack orders, but let’s accept the argument. Mass media and Big Tech companies have far larger platforms than we do, and all but unanimously support Black Lives Matter. What have we seen?

American Renaissance has a small platform, and the most powerful people in the world—the ones who control American technology companies—are trying to make it even smaller. Black Lives Matter gets media support and massive funding from corporate America. Who is inciting violence? Who has the power to do it?

It’s far more likely that the media incite black-on-white crime than that white advocates incite white-on-black crime. What we see is precisely what you would expect when blacks are taught to hate whites. Any given black person is 48 times more likely to attack a white person than the other way around. The New York Times will never tell you that, though in 2019 it wrote more than 70 stories about Emmett Till.

Blacks have much higher crime rates than whites and the government gives them privileges in jobs, education, and, increasingly, in criminal justice. However, the powerful tell us we are in a white supremacist society plagued by systemic racism.

There are realities we confront every day: racial gaps in wealth , IQ, and health. There will never be racial equality because the races are not interchangeable. Race differences are real, they have consequences, and they explain disparities better than conspiracy theories about “white privilege” or BLM’s borderline religious claims.

Any policy built on the assumption of racial equality will fail. The American government is now pursuing not just equality of opportunity but “equity,” or equal results. We can’t even talk about why that project will fail. Government will use more repression, more taxation, more censorship, and more force trying to achieve an impossible (and I’d argue immoral) goal that could destroy the country.

When “equity” fails to materialize it will only be proof that whites are incorrigibly racist and deserve hatred. I’d argue that the blood of every white person killed by blacks is on the hands of the journalists, academics, and politicians, who enjoy huge platforms and trumpet nonsense about race. I seem to recall Peter Brimelow saying the United States may not only fall like the Soviet Union but fall for the same reason. The Soviets denied the truth. They claimed they were reaching production quotas when production was falling. The United States assumes racial equality and is indignant at inequality. Instead of rethinking the assumption, our rulers assert it even more forcefully, thus ruining schools, cities, and public institutions.

If we need a “reality czar,” we need one for race. I propose that President Biden nominate Jared Taylor as Race-Reality Czar. It will be the czar’s job to correct claims made without evidence, challenge spiteful rhetoric against whites, and dismantle legal oppression against whites and Asians.

“Those who make peaceful revolution impossible will make violent revolution inevitable,” said President John F. Kennedy. Whites face state discrimination, disproportionate violence, and what amounts to a media campaign of vilification and incitement. Mr. Biden need only remember what he said in 1977 about forced integration: “Unless we do something about this, my children are going to grow up in a jungle, the jungle being a racial jungle with tensions having built so high that it is going to explode at some point.”

President Biden: perhaps you even remember the 90 percent white America of your youth. Please act quickly and appoint Mr. Taylor as Race-Reality Czar and give him the funding he needs. I’m sure Mr. Taylor will deliver better results than Head Start has. Otherwise, I fear continued tension, violence, decline, and even national disintegration.