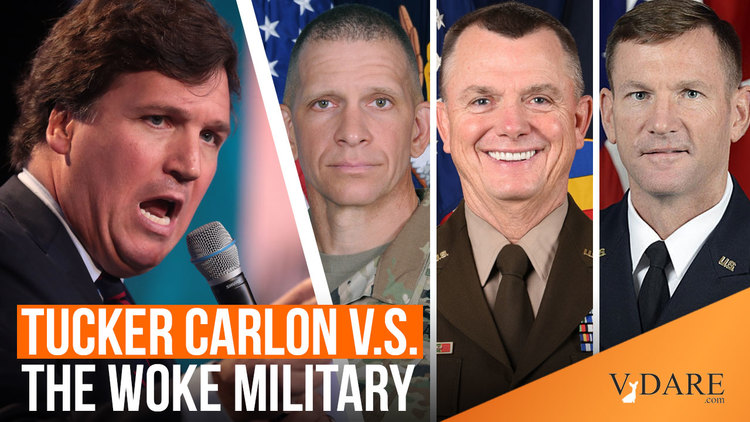 Previously: Woke Purge Of U.S. Armed Forces Underway—But How Will They Fight Their MidEast Wars Without Whites?

Fox News host Tucker Carlson stirred the hornets’ nest last week by daring to criticize the military’s woke prerogatives. He wondered why the military would deploy pregnant women in combat. Several military leaders used their government accounts to attack Tucker for his opinion.

Robert Hampton at Counter-Currents collected some of the most cringe responses:

Thousands of women serve honorably every day around the globe. They are beacons of freedom and they prove Carlson wrong through determination and dedication. We are fortunate they serve with us.

Women lead our most lethal units with character. They will dominate ANY future battlefield we’re called to fight on.

@TuckerCarlson’s words are divisive, don’t reflect our values. We have THE MOST professional, educated, agile, and strongest NCO Corps in the world.

The best response came from Marine Corps Master Gunnery Sgt. Scott H. Stalker, the senior enlisted member of the Space Force. Stalker put out a video calling Tucker “drama TV” and castigated him for serving 0 days in the military. He defended pregnant women in combat because the supposed experts told him that they’re effective warriors. Stalker delivered his monologue in a cadence reminiscent of a drill sergeant, embodying the SIR YES SIR type. He made sure to sign off with “God Bless America and Semper Fidelis.”

[The Evil Empire Gets Lamer, by Robert Hampton, Counter-Currents, March 12, 2021]

And these are just a sampling of the military’s woke behavior. The Guam National Guard may have topped all of these responses in using itself as a political prop to humiliate Georgia Rep. Marjorie Taylor Greene. Guam guardsmen marched into Greene’s office to tell her that Guam is a part of America. The intended purpose was to go viral with liberal Twitter. Apparently, none of them thought it’s wrong to use the military as a political weapon.

LOL. @mtgreenee called Guam a foreign land. So members of the Guam National Guard paid her a visit. (Guam has been a U.S. territory since 1898 and its residents are U.S. citizens.) pic.twitter.com/3bNoOeXkZr

There is a whitepill from these recent outrages: it’s waking up the historic American nation to the danger of woke militarism—an event I predicted in a January column. Most conservatives backed Tucker in his feud and denounced the military. This is exactly the response needed from the Right. The Woke Military doesn’t deserve the same deference as the soldiers who won World War II.