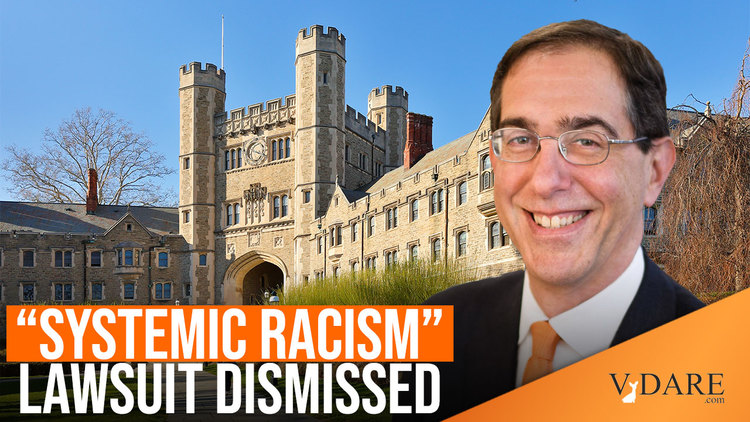 The war against race preferences has suffered two setbacks recently, one  of which seems actually to have happened last month, while Trump was still in the White House. We only heard news of the setback this week.

This was the investigation announced last September by Trump's Department of Education into racism at Princeton University.

Following the George Floyd riots and accompanying race hysteria, Princeton's president, a jellyfish named Eisgruber [Email him] broke off from flagellating himself for a moment to sob that, quote:

Racism and the damage it does to people of color nevertheless persist at Princeton as in our society.

That, said the Department, amounted to a confession of having violated federal anti-discrimination laws—grounds for a federal prosecution.

Those of us who detest the racial favoritism of higher education, with their anti-white quotas hidden behind weasel phrases like "holistic admissions"; those of us who would like to see the federal government do to the Ivy League what Henry the Eighth did to the monasteries; we were rolling around laughing at this open assault on academic hypocrisy.

Alas for the hopes of man. We heard this week that the investigation is a dead letter [Trump’s diversity fights with Yale, Princeton are dropped, by Patricia Hurtado and Janet Lorin, Bloomberg News, Feb 3, 2021]. According to a statement from Princeton President Weaselgruber on Thursday, in fact, quote:

After its initial letter to us, the Department of Education took no substantial action on its bogus "investigation" except to close it as the Trump administration left office [President Eisgruber’s annual State of the University letter, February 4,2021].

Apparently in this instance, as in so many other of its hopeful initiatives, the Trump administration was all bark but no bite.