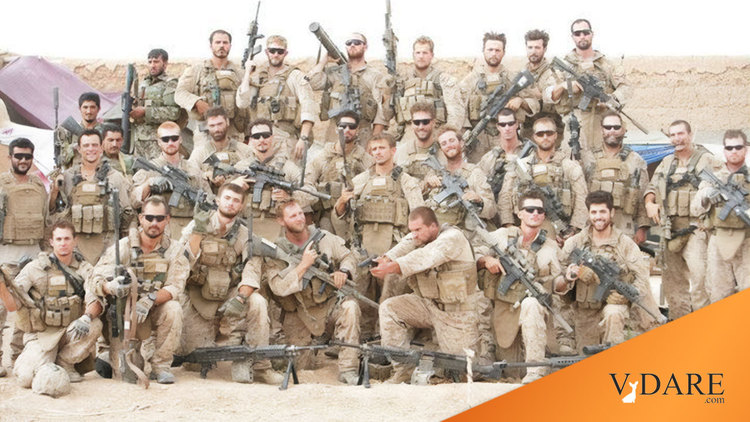 Woke Purge Of U.S. Armed Forces Underway—But How Will They Fight Their MidEast Wars Without Whites?

It took the inauguration of Joe Biden, who supposedly received the most votes of any president in history, for Leftists to declare their love of the U.S. military. Last week Washington, D.C.’s ultra-Woke Leftist population greeted the National Guard that occupied the city as a liberation army—such was their crazy fear that “white supremacists” would oppose the incoming Biden regime. Frighteningly, though, the Leftists might not be wrong about the new military, given what’s been happening even under former President Trump: It might well be used to crush the Deplorables now that their agenda—America First—is being portrayed a terror threat. Even more frighteningly, cowardly military brass have accepted the mission and plan to purge the services of Right-wing dissidents [Lawmakers move to oust extremists from military, by Ellen Mitchell, The Hill, January 24, 2021] Simultaneously, of course, the armed forces will once again become a global policeman for Ruling Class militarists unhappy that Trump stalled their imperial agenda in the Middle East.

What occurred in D.C. during the inauguration would be laughable were it not so real. Restaurants that peddled Black Lives Matter propaganda offered free food to the 26,000-strong occupation force, and proudly touted how much they loved the troops. “We’re three blocks from the Capitol,” We, The Pizza manager Robert Early told the Mainstream Media. “You see what happened on January 6 and they're here to protect us” [DC restaurants donate meals to troops, first responders, by Zach Merchant, WUSA9, January 17, 2021]. Remember, Biden won DC by more than 92 percent [District of Columbia, Washington Post Electoral Results]. Washingtonians aren’t the types that shouted “These Colors Don’t Run!” during the Bush years.

Of course, before the troops rolled in, Democrats had to vet them for WrongThink. Mayor Muriel Bowser called on the Pentagon to screen and remove “anybody who cannot pledge allegiance” to the present order, whatever that means [DC mayor calls to TERMINATE National Guardsmen with ‘conflicting views’ before inauguration, RT, January 20, 2021]. Rep. Steve Cohen, D-Tenn., actually wanted the military to purge soldiers because they’re too white—white males overwhelmingly voted for Donald Trump, after all [Democratic Congressman Steve Cohen Suggests National Guard Members Might ‘Want to Do Something’ to Joe Biden, by James Gordon, Daily Mail, January 18, 2021].

The Pentagon obliged. At least 12 guardsmen were removed because of “extremist” views. Two were booted for “inappropriate” comments or texts; the other 10 for questionable backgrounds. Significantly, the details were not released, but remember that the Biden Regime claims that Trump is an “extremist.” [12 Army National Guard members removed from inauguration duty, by Barbara Starr et al., CNN, January 19, 2021].

Then Biden discarded the troops when the need for a display of military might was over. Hundreds of guardsmen were forced to sleep in a cold, cramped parking garage after Capitol authorities decided they took up too much space after the inauguration. Obviously “Support the Troops” has its limits with Democrats [Biden Apologizes After National Guard Troops Are Sent to Parking Garages, by Charlotte Klein, New York, January 22, 2021].

Needless to say, the deployment was a complete waste. The Pentagon has admitted the force didn’t meet a single threat [The 26K Guard Troops in DC Did Not Face a Single Inauguration Security Threat, by Matthew Cox, Military.com, January 21, 2021]. But a sizable contingent of 6,000 troops is staying in the Capitol.

Patriotic Americans in the armed forces had better get one thing straight. Keep your mouth shut if you're a Trump supporter or even a vanilla conservative with a long-time membership in the National Rifle Association. Biden’s Pentagon will continue and intensify the hunt for “right-wing” subversives that began (disgracefully) in the final days of the Trump administration, when acting defense secretary Christopher Miller moved to weed out suspected right-wing radicals. Joint Chiefs of Staff Chairman Gen. Mark Miley issued statements insisting that Biden is the president and the armed forces will not tolerate “white nationalists.” “These people are not representative of our country’s military,” he told The New York Times [Pentagon Accelerates Efforts to Root Out Far-Right Extremism in the Ranks, by Eric Schmitt et al. January 18, 2021]. 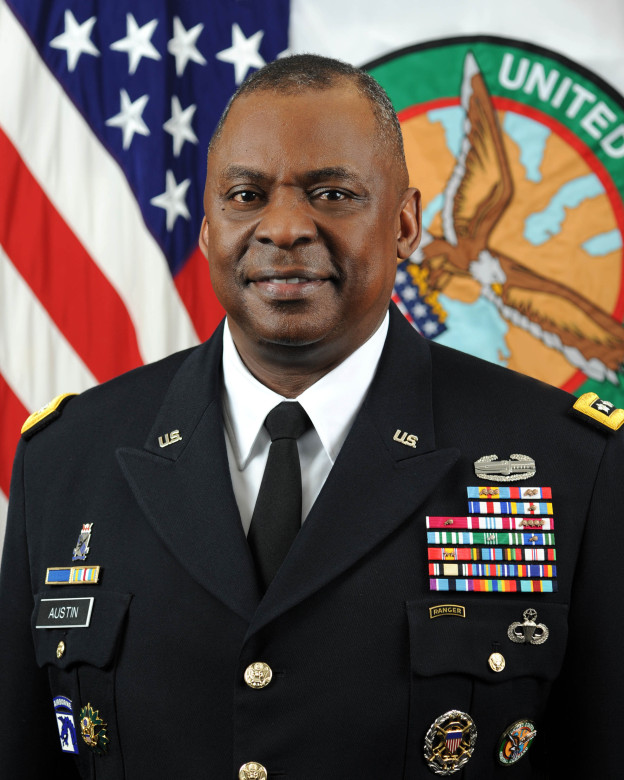 During his Senate confirmation hearing, incoming Defense Secretary Lloyd Austin, who is black, of course, said a key mission to rid the military of such undesirables:

I will fight hard to stamp out sexual assault, to rid our ranks of racists and extremists, and to create a climate where everyone fit and willing has the opportunity to serve this country with dignity. The job of the Department of Defense is to keep America safe from our enemies. But we can’t do that if some of those enemies lie within our own ranks.

No senator asked the retired general to identify the “enemies within our own ranks.” They must’ve been too awed by the prospect of the first black Defense Secretary to ask any pertinent questions.

Despite all the alarm over “right-wing extremists,” the Pentagon not fessed up to who or what they are. But some regrettable and apparently since-withdrawn materials shed a sinister light. Last July, the Army apologized for a handout that identified “Make America Great Again” as “covert white supremacy,” and put Columbus Day (! —still a federal holiday) and the “All Lives Matter” slogan in the same category. The Army apologized and promised an investigation [US Army investigating handout calling ‘Make America Great Again’ a form of White supremacy, by Adam Shaw, Fox News, July 10, 2020]. But with Trump gone, will anyone in the military who wants a secure retirement complain about such propaganda?

Given what top Democrat leaders have said in the past two weeks, the armed forces’ time-serving leaders might well declare that wearing a MAGA hat or saying “all lives matter” qualifies a lowly private from Kentucky for discharge as an “extremist.”

Wouldn’t you know it, the Pentagon is scheduled to release a report on such “extremism” within the armed forces in March.

And even as it drums out “right-wing extremists,” the armed forces are poised to swear allegiance to the diversity cult. During the summer, several senior military leaders endorsed Black Lives Matter. The Pentagon also banned the Confederate flag from its bases in order to facilitate more diversity (by suppressing the symbols of the white South).

The same defense bill that abolished Confederate names and honors from military facilities also established a “diversity watchdog” who “will keep the heat on the military to make sure that racial inequality does not fade from the priority list,” says Rep. Jackie Speier (D-CA). This new deputy inspector general will also assess “extremist” activities and help weed out suspected “white supremacists” [Pentagon gets diversity watchdog in bill passed over Trump veto, by Tony Capaccio, Bloomberg, January 6, 2021].

The Soviet Union has a word for this “watchdog”: Commissar.

So if the tests reduce diversity, then they might be stopped. In other words, the armed forces will accept the less intelligent and less physically fit to ensure that it’s less white.

Americans should be appalled that top military officers are going along. Just before the election, Maj. Gen. Ed Thomas, the commander of Air Force recruitment, bewailed his service’s lack of diversity. The only way to counter these threats from Russian and China is with more diversity, he wrote in an op-ed:

Thomas is particularly distressed that 86 percent of Air Force pilots are white males. Why this is bad, he doesn’t explain. Perhaps just being white is enough explanation.

The Navy is obsessed, too. Hardly any white faces appear in one recent advertisement.

Apparently, the Navy welcomes everyone “in the world,” and brags about recruiting people of all different colors, creeds, and religions to man—or woman—its floating Babels.

“Win Wars”? The Navy is the least battle-tested element of all the U.S. armed forces (which is why it can get away with being the most Politically Correct). It has not fought a general fleet action since Leyte Gulf in 1944.

Maybe all that “diversity” explains its many recent failures, such as multiple ship collisions .

Though all this will worsen under Biden. But maybe worse is better.

The drive for diversity and the snipe hunt for “white supremacists” will awaken the Historic American Nation to out Woke military. Patriotic members of the Historic American Nation might not be so willing to enlist if they view the armed forces as enemy territory. But the armed services still depend on whites, particularly Southern boys, to fight wars [American War and Military Operations Casualties: Lists and Statistics, Congressional Research Service, September 24, 2019].

A VDARE reader's son is in this pic of US Marines in Afghanistan. They don’t call the Marine Corps “the gun club” for nothing.

Biden will undoubtedly involve the U.S. in more foreign wars on behalf of the Ruling Class. Yet turning the military into another racial-socialist government bureaucracy focused on “diversity” will diminish its war-fighting capability.

Not for the first time, Woke Democrat dogma is on a collision course with reality.