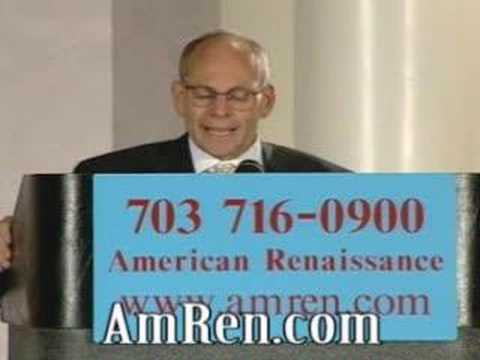 In his column last night The New Census Projections: From White America to Alien Nation in One Lifetime, Peter Bradley wrote

The philosopher Michael Levin once remarked at an American Renaissance conference that the year 2100 is more worrisome than 2050. Even after whites officially became a minority, he explained, they will still be the largest group and in charge of most institutions. But when the numbers start declining even further, all bets are off.

Peter Bradley was writing from memory—always a tricky thing when you’re quoting—so originally, I didn’t include one of our well-known citations. However, American Renaissance is online, and the speeches are available on video, so I was able to track it down:

[W] hites may well govern — that is, occupy virtually all positions of power — no matter what ideology is dominant. Blacks and non-European Hispanics may become more numerous in the United States, but even in a democracy they will have to have someone to vote for, and whites will generally manage to be the ones that get into a position to be elected. (We see this with the sexes: there are more female than male voters, but at the national level virtually all leaders are men.) This may explain why whites rule in Brazil, even though the black population is proportionally much larger than in the United States. It is not that blacks think whites are more fit to rule, it’s just that the naturally dominant group always does dominate.

Thus, I fully expect that when 2050 rolls around, and assuming (as the demographers assure us) whites become a minority, whites will still rule because they will be better organized. However, at some point they will be unthroned through sheer weight of numbers — perhaps by the 22nd century.Is There a Superior Race?, A philosophical answer to the inevitable question, by Michael Levin, American Renaissance, February 1999

Here's where Levin says it on YouTube at 41m 54s in his speech, or you can watch the whole thing below:

Michael Levin's answer to the question he raises is nuanced and thoughtful, but there's no question that he's lucky to have tenure at CUNY. [CUNY Barred From Punishing White Professor, By Constance L. Hays, NYT, September 5, 1991]