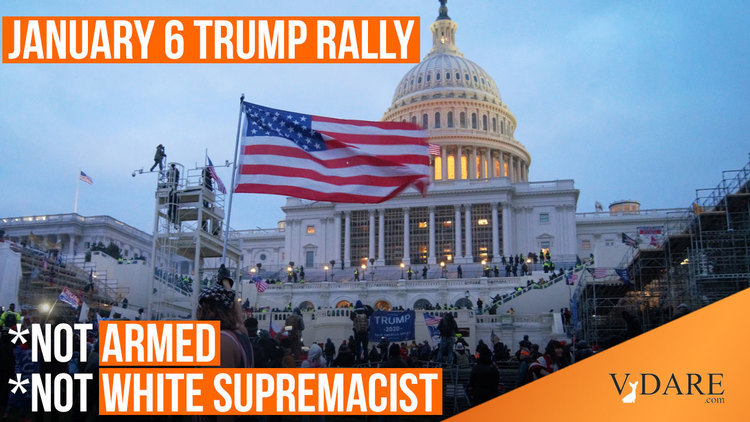 From ABC, what is allegedly a news report:

Wisconsin Sen. Ron Johnson is facing backlash for comments he made Thursday about Black Lives Matter and antifa that have been deemed "racist" and "unacceptable."

Johnson, a Republican, told a Wisconsin Radio show host that he was not concerned for his safety during the Jan. 6 attack on the Capitol, which left five dead, but that he may have been if the protesters had been linked to those groups.

Johnson said he "never really felt threatened" because the protesters were largely "people that love this country, that truly respect law enforcement, would never do anything to break a law."

But Johnson told radio host Joe "Pags" Pagliarulo, "Had the tables been turned and President Donald Trump won the election and those were thousands of Black Lives Matter and antifa protestors I would have been concerned."

GOP Sen. Ron Johnson says he didn't feel 'threatened' by Capitol marchers but may have if BLM or antifa were involved
He said the protesters largely "love this country."
By Allison Pecorin, ABCNews, March 13, 2021, 16:04

First of all, saying that the protests left "five dead" implies that the Trump supporters killed them. In fact, all the dead were Trump supporters, including Officer Brian Sicknick. One was an unarmed protester shot by a black Capitol Hill policeman, and the other four were either heart attacks, trampling, or strokes, including Officer Brian Sicknick.

ABC's proof that January 6 was dangerous:

Over 300 people have been charged in connection to the Capitol attack, and investigations are ongoing. Protesters who breached the Capitol on Jan. 6 injured dozens of Capitol Police officers, who were met by an often-violent and armed mob attempting to enter the Capitol building.

The armed part is a lie, unless you mean flagpoles, etc., and the number of people charged is indicative of persecution, rather than dangerousness, the "ruthless coercion" that was not used on the people who, for example, burned a police station in Minneapolis.

Johnson explained what he meant about the danger of BLM/Antifa, both of whom, by the way, have been known to bring guns to riots:

Johnson, in response to a request for comment from ABC News, cited data on Black Lives Matter protests from over the summer.

"Out of 7,750 protests last summer associated with BLM and Antifa, 570 turned into violent riots that killed 25 people and caused $1-$2 billion of property damage," Johnson said. "That's why I would have been more concerned."

ABC's Pecorin [Tweet her] responds to this with a reiteration of the "Mostly Peaceful" lie, i.e., "In more than 93% of all demonstrations connected to the movement, demonstrators have not engaged in violence or destructive activity," which may not be actually a lie, but is irrelevant.

These VDARE.com links are selection of articles on our site that use the words "mostly peaceful".

That last one refers to this:

That's the difference between BLM and the January 6 protesters.

If you want to know more, read Peter Brimelow's  CAPITOL "INSURRECTION" HOAX: How Our Lying Press Would Have Spun Jan 6 Protest If Trump Were A Democrat [VIDEO], or watch the video below: