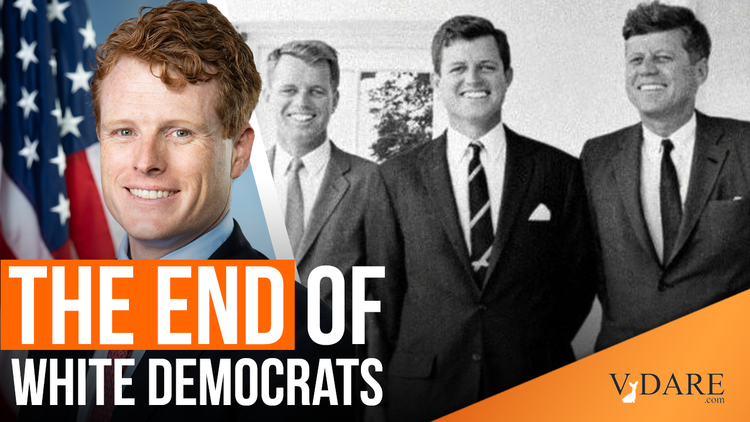 Camelot Is Dead, And So Are The White Democrats

Earlier: The Democratic Party Has Tipped—Great News For The GOP (Which Doesn’t Deserve It)

“At night before we’d go to sleep, Jack liked to play some records; and the song he loved most came at the very end of this record. The lines he loved to hear were: Don’t let it be forgot, that once there was a spot, for one brief shining moment that was known as Camelot.” 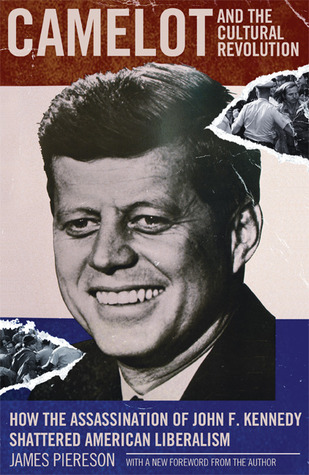 This Life magazine interview, given just weeks after President Kennedy’s assassination, gave birth to the myth of the Kennedys as “American royalty,” which has always provoked an eye roll on the political Right. However, I consider the Camelot myth highly appropriate because the Kennedys very much resemble the British Royals—spoiled rich, entitled, oversexed, and never under any pressure to get a real job. The Kennedys, like the Windsors, live far removed from the experiences of everyday people, and they habitually engage in vapid virtue-signaling at the expense of their countrymen. Needless to say, this includes support for mass Third World immigration.

Think about it: Don’t the stories of Prince Andrew carousing with teenage girls on Jeffrey Epstein’s island remind one of Michael Kennedy’s affair with his babysitter? [RFK's Son & Baby-Sitter? Accused Of 5-Year Affair With Teen; He Hires A Lawyer, NY Daily News, April 26, 1997]. Or Ted Kennedy famously sandwiching a waitress with Chris Dodd at La Brasserie in Washington, D.C.?

Unlike the Windsors, however, the Kennedys have had the advantage of the so-called “Kennedy Curse”, which they (along with a compliant corporate media) periodically invoke in order to bump their poll numbers. Of course, it would be traumatic for any family to suffer two public assassinations within five years. But it is preposterous to claim that every Kennedy tragedy, even it’s caused by drug overdose (David Anthony Kennedy, 1984, Saoirse Kennedy Hill, 2019), is due to some mysterious “curse.” Most Kennedy tragedies are just the consequences of reckless behavior: Chappaquiddick, JFK Jr’s plane crash, Michael L. Kennedy’s ski slope death [Legacy of Untimely Death Continues, by Dan Balz Washington Post, January 2, 1998].

There is, however, a real Kennedy Curse, one that the family does not like to admit: the curse of demographic transformation that Ted publicly championed through his vocal support of the Hart-Celler Immigration Act of 1965.

Back then the Kennedys enjoyed an extraordinary amount of political capital due to the broad public sympathy they enjoyed. The fact that two Kennedys (Ted and Bobby) supported Hart-Celler in the Senate helped give the legislation a moral force that it never deserved. In fact, Ted specifically promised that Hart-Celler would not transform the ethnic core of the country:

"First, our cities will not be flooded with a million immigrants annually. Under the proposed bill, the present level of immigration remains substantially the same.”

“Secondly, the ethnic mix of this country will not be upset.”

“Thirdly, the bill will not permit the entry of subversive persons, criminals, illiterates, or those with contagious disease or serious mental illness.”

All lies, but Ted may have actually believed them because he was less an architect of our demographic revolution than a tool of it. Kennedy was a full-time drunken playboy during the 1960s (and beyond) and never thought too deeply on policy matters. Especially after Bobby’s death, Ted’s main responsibility was to keep the family legacy “alive” publicly, while leading a life of debauchery privately.

That legacy is now in shreds because the Open Borders policies the Kennedys long supported have now made them unelectable, even in Massachusetts. In fact, two years ago I wrote about how John F. Kennedy’s former congressional district has now become majority-minority, which enabled the election of former Kennedy staffer Ayanna Pressley. 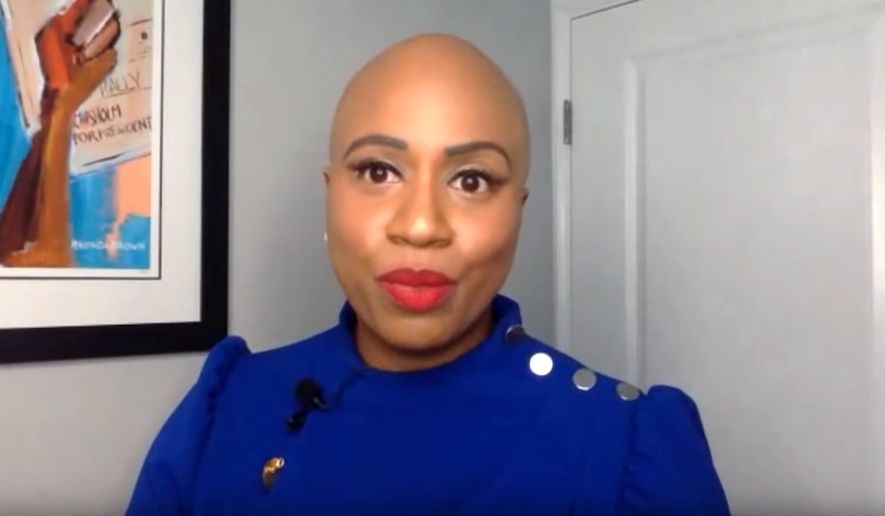 Ayanna Pressley (NumbersUSA F-) has since declared open war on white America while becoming arguably the scariest-looking member of “The Squad” [Dem Rep. Pressley says it's 'not good enough' for white people to not be racist: 'Come on, Becky,' by Douglas Ernst, Washington Times, June 15, 2020].

At any rate, after Jack’s death Ted became a rubber stamp for the Great Society [In Kennedy, the Last Roar of the New Deal Liberal, by Sam Tanenhaus, NYT, August 28, 2009]. He almost never expressed an original thought on anything. However, there is some evidence that even Ted may have grasped the magnitude of the social havoc he helped inflict on the country. 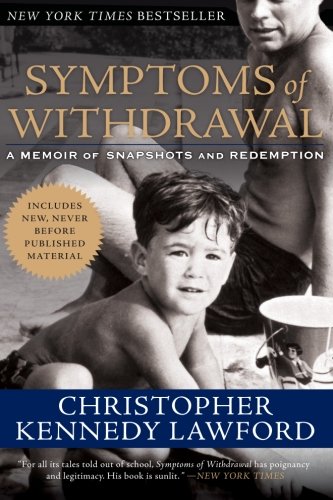 In his 2006 memoir, the late Christopher Kennedy Lawford, nephew of JFK,  tells a story about a family gathering where Ted admitted to the coming chaos.

[Ted] took a long, slow gulp of his vodka and tonic, thought for a moment, and changed tack. “I’m glad I’m not going to be around when you guys are my age.”

I asked him why, and he said, “Because when you guys are my age, the whole thing is going to fall apart.”

The statement hung there, suspended in the realm of “maybe we shouldn’t go there.” Nobody wanted to touch it. After a few moments of heavy silence, my uncle moved on.

This sounds as much an admission of guilt as an act of prophecy.

You would think, knowing this, that Ted might have advised the family to shift their politics. But he didn’t. Consider the immigration voting record of every Kennedy in Congress over the last 50 years.

Still, while Rep. Joseph Kennedy III’s may emulate his family politically, he reportedly does not do so privately. Young Joe is faithfully married, doesn’t drink alcohol, and unlike Ted, who got busted having a classmate take his Spanish test at Harvard, Joe actually speaks Spanish fluently, and often spoke it on the campaign trail.

Nevertheless, Ed Markey crushed Joseph Kennedy (55.4 to 44.5%) in the Democrat Senate primary on September 1. This must be a giant ego bruise for the family. A former ice cream truck driver, Markey has been in Congress since 1976 and accomplished nothing except get continually reelected by keeping his head down and voting the party line. In fact, Markey has long used his childhood bedroom in his parents’ house in Malden MA as his voting residence while living full-time in Chevy Chase, MD [For Markey, A Tale of Two Homes, by Noah Bierman & Frank Phillips, Boston Globe, February 14, 2013]. Until Markey ran for an open Senate Seat in 2013 (against a pathetic Open Borders Republican), most voters had barely heard of him.

Joe Kennedy largely campaigned on the family “legacy” and actually tried to out Open-Border his opponent (in English and Spanish) with strange moves like boasting of his effort to win the previously undiscovered “Cambodian vote” [Congressman Joe Kennedy III visited Cambodia Town in Lowell, by Soben Pin, KhmerPost USA, July 27, 2020]. Kennedy also repeatedly bent the knee to Black Lives Matter, hiring a notoriously corrupt black appointee of Deval Patrick (Sheriff Steven Tompkins, right) to “advise” him [Joe Kennedy III Hired a Cop to Advise Him on Race and Justice, by Maia Hibbet, The Nation, July 10, 2020]. 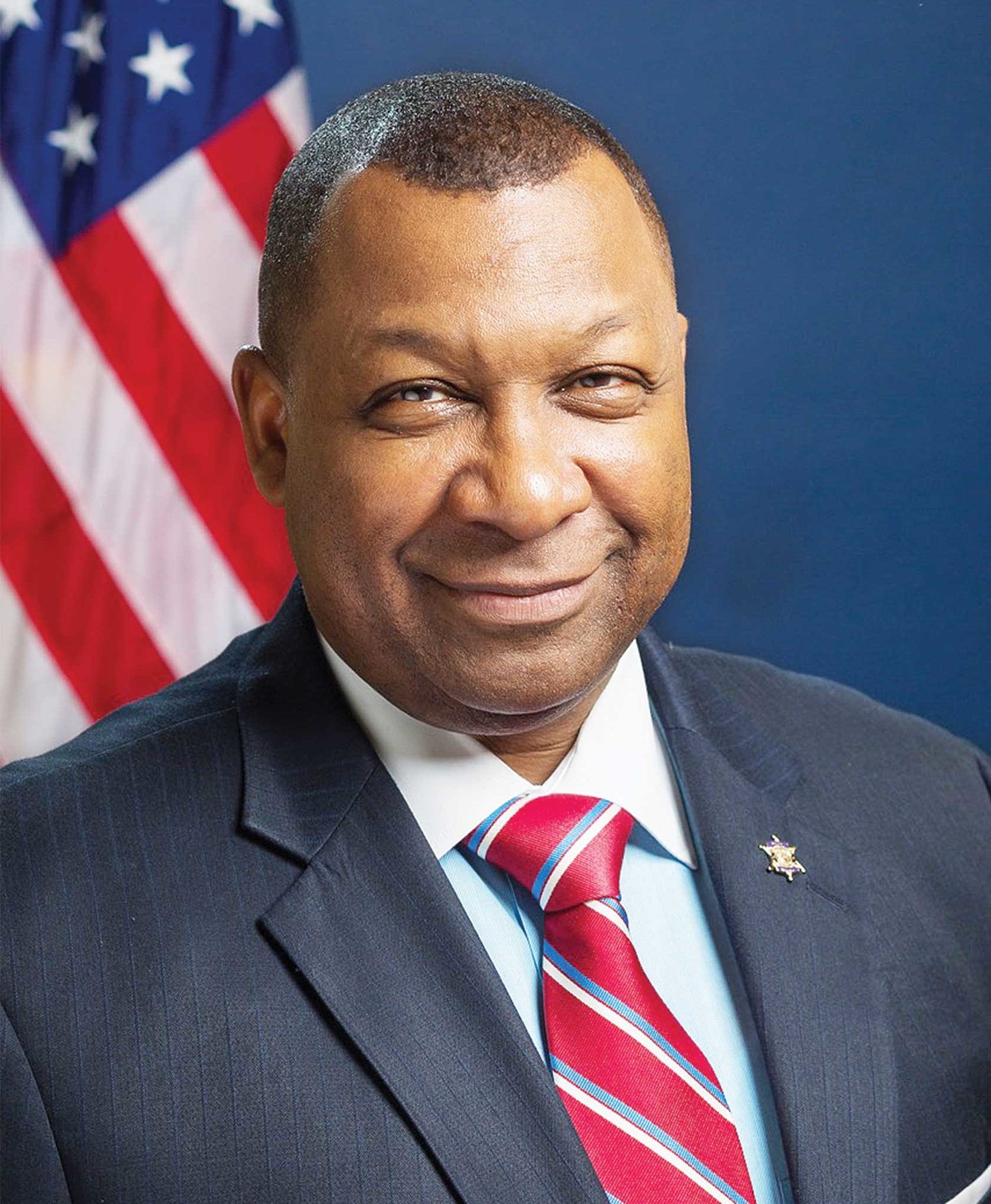 It was painful to watch. Which is precisely why so many people didn’t, especially given that both candidates had virtually identical platforms (Ed Markey, NumbersUSA F-).

So why did Markey win?

It’s simple. The Democratic Party has tipped demographically. The white-loathing POC Left that is rising to power could not tolerate the prospect of a 39-year-old straight white male Democrat with star power arriving in the U.S. Senate—which is why Alexandria Ocasio-Cortez and other Squad members preferred the elderly Markey, who will be 80 when his term expires [Doug Schoen: Markey's Mass. primary victory proves AOC is most powerful Democrat in America, by Doug Shoen, FoxNews, September 2, 2020]

These minority Democrats are planning for a future in which they have exclusive control over a party where whites need not apply. Indeed, Boston’s BLM District Attorney, Rachael Rollins, has already warned Kennedy that he should not run again in 2017 if Elizabeth Warren retires because the Squad is eying her seat [Rachael Rollins would be ‘shocked’ if Ayanna Pressley doesn’t someday run for Senate: Pressley is not ruling it out, by Nik Decosta-Klipa, Boston Globe, September 1, 2020].

Like Dr. Frankenstein and his monster, White Democrats created this minority voting bloc in order to acquire power—only to have that power usurped by those very minorities that inevitably turned on them.

In the waning days of the campaign, Joseph Kennedy tacitly invoked the Kennedy Curse by claiming that he had been receiving death threats [Joe Kennedy, facing death threats, gets beefed up security on campaign trail, by Joe Battenfield, Boston Herald, August 24, 2020].

Maybe he did. But it didn’t matter—not simply because the well of public sympathy has run dry for America’s Royal Family, but because Kennedy is the wrong color.

Let it be known from this moment forward that the torch has been passed to a new generation of Kennedys—and that the torch was snatched from them by the very mob of white-loathing politicians they put into power in the first place.

No Kennedy will ever be able to pick it up again; not in Massachusetts, not anywhere. Camelot is dead, and the only Kennedy Curse that remains is the demographic curse they inflicted on the country that once treated them like royalty.

This is what Ted Kennedy was obviously anticipating when he said that the whole thing is going to fall apart.