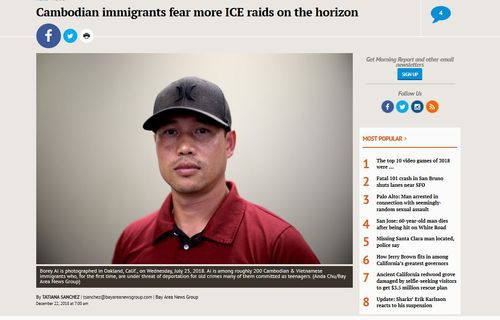 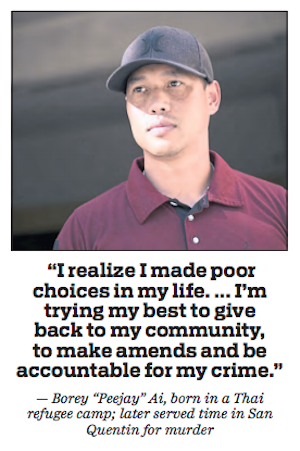 Here’s an update on an illegal alien sob story: the subject is a Cambodian, Borey Ai, who killed a man during a liquor store robbery. I reported on the case in August: Refugee Criminals Are Sad about Facing Deportation.

Ai originally got a life sentence for second-degree murder — so the judge and jury took the crime seriously despite the perp being a teenager — but spent only 20 years in San Quentin, since this is California after all.

On Saturday, the San Jose Mercury News brought us the news of Ai’s worries in a sympathetic front-page article — as if Americans should disagree with deporting foreign killers.

It’s only been a few days since an Omni Air flight carrying 36 deportees, rounded up and detained by ICE earlier this year, landed in Cambodia. But already, immigrant communities in the Bay Area and across California are bracing themselves for more.

Borey “Peejay” Ai was born in a refugee camp in Thailand to Cambodian parents who fled genocide by the Khmer Rouge regime.

On the day he was freed from San Quentin — having served 20 years for the 1996 slaying of a Berryessa liquor store owner when he was 14 — ICE was waiting outside. Ai, who became one of the youngest people in California to be given a life sentence for murder, spent nearly two years in ICE detention. The state Supreme Court on Monday blocked Gov. Jerry Brown’s attempt to issue him a pardon, which could have kept him in the country. Ai’s case still sits in the 9th Circuit Court of Appeals. But deportation looms.

“I’m in limbo,” he said. “I’m not moving forward. I’m constantly thinking about my vulnerability to being deported.”

During his time in prison, Ai became a state certified counselor for domestic violence victims through a group called Guiding Rage into Power, which gave him a job after his release. He’s worked extensively with Kid CAT, a rehabilitative program at San Quentin praised for its focus on self improvement through education and counseling. Ai is also part of the Asian Prisoner Support Committee in Oakland, which works to rehabilitate former convicts as they re-enter society.

As he helps community members facing deportation, he deals with the reality that he, too, can be deported at any moment.

“I think about that everyday,” he said. “Everyday since I got out it’s been on my mind.”