Years ago, when I was still a Candidate-Member of the Beltway Right, I attended a dinner where President George W. Bush spoke. Bush stumbled through his speech in a mostly deadpan voice until he reached the part about spreading “democratic values” in Iraq. I was near enough to the then-president to watch his body language change in tune with the sudden passion of his voice.

“We’re doomed,” I said to my companion. “He really believes this stuff.” 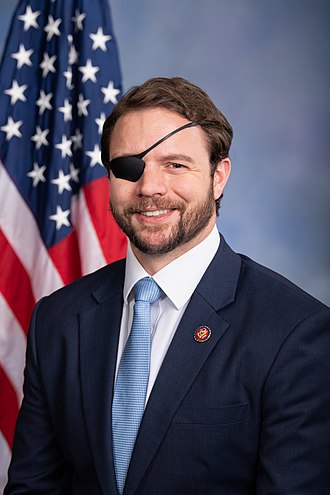 I think the same is true of Rep. Dan Crenshaw (R-TX). Although just 36 and elected only in 2018, he’s a grab bag of Dubya-Era clichés, half-truths, and banalities, personifying the braindead state of “conservatism” before Trump. Hence Crenshaw got into trouble in a recent interview by revealing, incredibly, that he didn’t know what the 1965 Hart-Celler Immigration Act was—and also that he believes “people who speak English” won’t go to work at construction jobs [Rep. Crenshaw Unfamiliar With 1965 Immigration Act, Says English-Speaking Workers Won’t Do Construction, District Herald, May 13, 2020].

Crenshaw is not an idiot, exactly. He’s a former Navy SEAL, which requires physical courage, dedication, and raw intelligence (hence the Obama Administration’s attempts to “diversify” the SEALs by lowering standards).

However, Dan Crenshaw doesn’t know anything about the most important law in postwar history.

It happened at a recent online townhall with Campus Reform, a project of the Conservatism, Inc. Leadership Institute. He was asked a question (at 61m5s) about how he would

like to amend the Hart-Celler Act and to what extent would you make birthright citizenship, as detailed in the Fourteenth Amendment, retroactive to include the children and grandchildren of illegal immigrants.

(Retroactively stripping citizenship from the children and grandchildren of illegals is precisely what I’ve advocated myself, taking inspiration from   India’s nationalist government.)

Rep. Crenshaw said it was an

interesting question, it’s a detailed question, I didn’t even get a chance to look into the act that you’re talking about.

This would be a politically safe answer if he were discussing a piece of legislation that is currently before Congress. However, we’re talking about something that’s been the law for 55 years and is transforming America—very notably his own city of Houston.

Let’s be charitable. Rep. Crenshaw correctly said that there has been some progress on illegal entry because of current DHS policies, above all the “remain in Mexico” initiative. He’s right.

However, he also said

we have many, many other priorities before we get to the Birthright Citizenship issue, when it comes to immigration, it’s the least of our, it’s not the least of our problems, but it’s close.

This is staggering. “Border control” means very little if the incentive for mass immigration isn’t closed off. Rep. Crenshaw even admits this incentive exists, but apparently doesn’t think we can do anything about it.

Crenshaw says the priority should be transforming our current immigration system into a “merit-based” system. However, seconds later, he says American companies “just can’t” hire Americans to do certain jobs:

These construction companies, they have tried, there’ve been studies, I think in Alabama, if you get rid of all the immigrants, nobody will work there….“That’s an American cultural problem I wish we could fix, I wish our teenagers would actually go to work, but they don’t.

Of course, the issue is not that Americans won’t do certain jobs, it’s that they won’t do jobs for low wages.

But even if they would, employers would rather hire illegals and dodge regulations.

It’s unclear what “studies” Crenshaw referring to; he may mean the “crops rotting in the field” narratives pushed by supposedly progressive publications like Mother Jones when Alabama attempted to stop illegals working in agriculture [“It’s Just Not Right”: The Failures of Alabama’s Self-Deportation Experiment, by Paul Reyes, Mother Jones, March/April 2012].

In any event, why is construction suddenly a job Americans “won’t” do? Perhaps some companies would go out of business if they could no longer recruit illegals and dump the costs on the taxpayer. Perhaps they’d be forced to raise wages. Why is this bad?

And what kind of “merit-based” immigration system does Rep. Crenshaw have in mind if Americans are cut out of jobs like construction?

Last year, Rep. Crenshaw supported H.R. 1044, which would have given a structural advantage for Indians seeking H1-B visas [Fact Check: Dan Crenshaw Big Business Talking Points on Green Card Giveaway Amid Backlash, by John Binder, Breitbart, July 15, 2019]. If Americans are cut out of jobs that require a college degree and jobs that don’t, what are they supposed to do?

Rep. Crenshaw is also saying all this when the unemployment rate in the United States is projected to reach 25%, matching the level of the Great Depression [Goldman Sachs issues warnings about US unemployment, by Matt Egan, CNN, May 13, 2020].

The fact is that despite his undoubted physical bravery, Crenshaw is unwilling to confront the Left’s hegemonic ideology on race, immigration, and nationalism,

There are three possible explanations behind Crenshaw’s conduct.

Obviously, the Open Borders insanity pushed by the likes of Ilhan Omar and Alexandria Ocasio-Cortez means that Crenshaw has room to triangulate against them on immigration while not having to upset donors by threatening the flow of cheap labor. He can thus keep his reputation as an upcoming Republican presidential contender while avoiding serious accusations of racism.

John Derbyshire recalls from his National Review days that many candidates genuinely had never considered immigration. It’s apparently not a big topic in the country clubs. Never ascribe to conspiracy what can be explained by stupidity.

Crenshaw doesn’t know what the Hart-Celler Act is and will actively avoid learning about it. Successful conservative careerists know there are certain things it is better not to know. Why would Crenshaw research the Hart-Celler Act?

Suppose he did research it and found that America was changed beyond recognition, either through stupidity or malice. What would he do with such knowledge?

Crenshaw clearly doesn’t think anything is politically possible. In this same Leadership Institute  interview, he dismisses the idea anything can realistically be done about Birthright Citizenship, even though that would be far easier than repealing the 1965 Act.

Conservatives also hold a self-defeating moral code. In my time in Conservatism Inc., I found that few denizens would actually dispute the truth about demographic change or its dire political implications for the GOP. Everyone knows demographics are destiny at some level. Every Election Day boils down to crude efforts to turn out or suppress certain demographics—for both parties.

Yet there was a curious fatalism about the way Conservative Incers interpreted this truth. They seemed to feel it would be morally illegitimate (“Identity Politics!”) to preserve a white majority, even when the other side openly used “identity politics” for its own ends. It was better to lose than to stand morally condemned—even if the moral code was one crafted by your avowed enemies.

For example, I recall how, in one CPAC planning meeting, a proposed panel on the effects of demographic change and its challenges to the GOP suddenly transformed into a panel on how to win more Hispanic votes. It’s not that people were afraid of what the hostile media would say, or thought the initial suggestion was racist. They simply could not comprehend that preventing immigration could done. It was literally unthinkable, politically as well as morally.

Beltway Conservatives discuss immigration as if it is a natural, inevitable process, like soil erosion. Admitting the truth that politics is downstream from demographics—not “ideas”—would undercut the movement. It would require acknowledging racial realities, although to most repudiating racial egalitarianism would be far more blasphemous than denying the Resurrection of Christ. Their outrage would also be rooted in something closer to religious fanaticism than rational disagreement.

Crenshaw seems to operate in this way. Consider:

(Why must the argument be framed in this way?)

(Yet if the questioners are right, what is Crenshaw going to do when his base is demographically swamped?)

(Can he truly not imagine an alternative to operating within—and supporting—the bounds of Main Stream Media-approved opinion?)

Not surprisingly, Dan Crenshaw was a special target of the “Groyper Wars,” a figure akin to John McCain in symbolizing the cuckservative spirit.

However, I don’t think Crenshaw is a shill. I think he really believes what he is saying, as do other Republican politicians and “conservative” staffers who think like him. He genuinely doesn’t see the contradiction between saying we need a “merit-based” immigration system and immigrants to do the jobs Americans won’t. He truly thinks convincing those who benefit from Identity Politics to give it up is more realistic than stopping or reversing demographic change.

Crenshaw and most other conservative staffers and politicians can’t even imagine a moral framework other than the anti-white one they operate under. If they lose, they believe they deserve it because they weren’t able to convince enough nonwhites.

And they would rather lose if it means they can keep their illusions.

Regardless of whether Crenshaw can see the truth or not, it’s going to catch up with his ambitions. Texas is a battleground state in 2020, almost entirely because mass immigration has transformed the state population. As one expert quoted in NPR observed, the “Latino vote is driving much of the urban shift from red to blue,” with more and more “children of immigrants” reaching voting age [Is 2020 The Year Texas Becomes A Battleground State?, by Andrew Schneider, NPR, May 11, 2020].

While Crenshaw thinks Birthright Citizenship is almost the “least” of our immigration problems, it’s actually the Number One threat to his political survival.

If Dan Crenshaw runs for President in 2028 or later, he may well find Texas has gone the way of California. Crenshaw will be another “B-1” Bob Dornan, a military hero who championed black Civil Rights and smirked about whites losing their majority, but who was shocked when psychologically healthier foreigners naturally replaced him with one of their own.

Just as the Democrats gave up on trying to convince the American people and just decided to replace them, American nationalists are going to have to do the same with politicians like Crenshaw.

They cannot be convinced. They must be replaced.