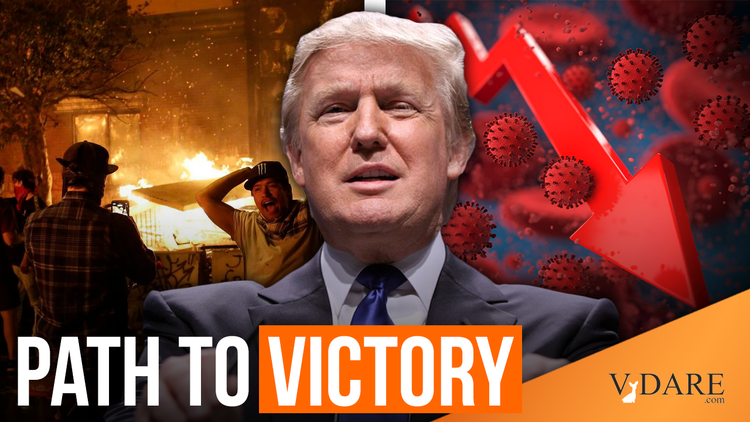 Patrick J. Buchanan: A Focused Trump Can Still Pull It Out

Earlier by Patrick J. Buchanan: Is Biden-Harris on Tom Dewey's Path To Defeat?

If Donald Trump loses the election, history will attribute his defeat to a pandemic that killed 200,000 Americans during his reelection campaign, and a historic depression deliberately induced to put the economy in a coma as the nation suffered through that pandemic.

But despite the worst hand dealt a sitting president since Herbert Hoover in 1932, Trump is by no means cooked.

Since the conventions of the DNC and RNC, Trump has narrowed the gap in several battleground states that will decide the winner of the Electoral College. One Florida poll found that Trump had erased Joe Biden's margin and pulled even.

Trump's denunciations of the riots that have gripped U.S. cities since the Memorial Day death of George Floyd have already forced Biden to come out of his basement to deplore the violence. And the contrast in their appearances has been dramatic.

Trump speaks out in the open, before huge crowds, in arenas and airport hangers. Biden, a socially distancing septuagenarian who is sheltering in place, looks more like an applicant for a retirement home residency. This may explain why Trump has made marginal gains among African American voters and more impressive gains among Hispanic voters.

Biden is also hurt by the mental and verbal lapses he seems to experience with every set of remarks, reinforcing the impression that he has lost more than a step to Father Time.

But Trump has had his problems as well since the GOP convention, beginning with book-length attacks on his character by his niece, Mary Trump, and his personal lawyer Michael Cohen.

This month brought an Atlantic article by editor Jeffrey Goldberg alleging that Trump had disparaged the sacrifices of dead and wounded U.S. soldiers from World War I, Vietnam and the Middle East wars.

Though Goldberg relied on anonymous sources to carry out his takedown of Trump, more than a dozen Trump staffers and advisers present at the meetings where Trump allegedly demeaned America's warriors denied Goldberg's allegations.

The Atlantic article was a kill shot aimed at the president by a hostile media. While it did not succeed, it drew blood, and the White House recoil testified to that.

Comes now Rage, the latest book by Bob Woodward, to which Trump contributed 18 interviews. The book is damaging because, at the least, a national debate about the issues raised by Woodward distracts massively from Trump's campaign imperative—taking down Biden so that he is seen as an unacceptable alternative to Trump.

Biden's strategy remains what it has been: turn the election into a referendum on whether the American electorate wants four more years of Donald Trump. As Trump's approval rating has been underwater since taking the oath on Jan. 20, 2017, such a referendum should result in a rejection of Trump and, de facto, a victory for Biden.

Trump must instead present this election as a binary choice: which of the two, Biden or Trump, has the leadership capacity, the superior ideas on the critical issues, and the ability to carry out his agenda?

Trump needs to convert a Mr. Congeniality contest into a decision of whom you want to lead the nation in this perilous hour. Whom do you want in the Oval Office dealing with the current crises: Mr. Nice Guy or the guy who showed he could get the job done before the pandemic came ashore?

With seven weeks left in the campaign, Trump's agenda of issues appears more appealing than Biden's.

Trump wants to secure the border against any new flood of illegal migrants from the global south while Biden's party is pro-amnesty and open borders, and favors sanctuary cities and abolishing ICE.

Trump wants to extricate America from the forever wars of the Middle East, as do most Americans. Where Biden is going to raise taxes by trillions, Trump is a proven low-tax and less-regulations leader.

Trump has appointed 200 federal judges and two Supreme Court justices and sought to elevate constitutionalists to the federal courts. Biden has thus far declined to engage on the issue.

On putting down urban anarchy, Biden is playing catch-up. His convention did not even address the issues raised by the Portland, Seattle and Minneapolis riots and the soaring murder rates in Chicago and New York.

On abortion, Trump has proven solidly pro-life, while Biden wants all taxpayers, including fellow Catholics, to subsidize what his Church teaches is the cold-blooded killing of the innocent unborn.

Trump needs to stay focused on the issues where the divisions are clear and compelling. The debates will show whether Joe has lost it and cannot be entrusted with the destiny of the republic.