Beginning about 1968, conspiracy theories became highly fashionable—the more doubtful, the better. I suspect the key event in this trend was the assassination of Robert F. Kennedy the night he won California’s Democratic primary on June 5, 1968. As Oscar Wilde might have been inclined to say, to lose one Kennedy may be regarded as a tragedy, but to lose two looks like a conspiracy. Or that’s what many people concluded.

It’s largely forgotten today, but in the early 1970s, RFK’s murder was almost as popular an object of conspiracy theorizing about a second gunman as JFK’s was. This was even though Sirhan Sirhan, smoking gun in hand, was tackled by several B-list celebrities including Olympic decathlete Rafer Johnson, NFL star Rosey Grier, and bon vivant George Plimpton (who was possibly on the CIA payroll, but that’s a different story).

Part of the conceptual problem Americans had in dealing with RFK’s murder was that we didn’t have a convenient category yet into which to lump Sirhan, so he got dumped into the dubious-sounding Lone Wacko category. In hindsight, the Palestinian immigrant was obviously an Arab terrorist—he shot Kennedy on the first anniversary of Israel starting the Six Day War in vengeance for Kennedy pandering to Jewish voters by promising to send warplanes to Israel. But the notion of Arab terrorism didn’t emerge until later, and few Americans seemed to make the connection between Arab terrorism and Sirhan. 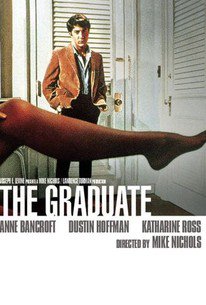 The Six Days War was another massively important event in American cultural-political history for reasons I outlined in Taki’s Magazine in 2013 looking back on the surprise success of the 1967 movie The Graduate, a film that in previews had failed to impress either Hollywood’s executives nor, on a campus publicity tour, the younger generation. But in the second half of 1967, it became hugely popular in a few theaters on the Upper West Side and went on to make a fortune across the country the following year.

It’s worth noting that The Graduate’s director Mike Nichols came from a center-right background. His parents were anti-Communist Jewish refugees from the Bolsheviks who had found refuge in Berlin, where they moved in the same liberal but anti-Communist circles as the Nabokov family.