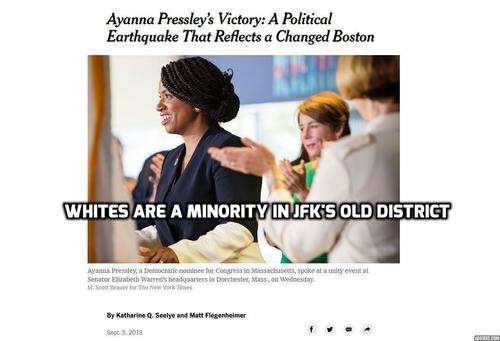 See also by Matthew Richer: After The Wake, A Constituent Reflects On The Real "Kennedy Curse" 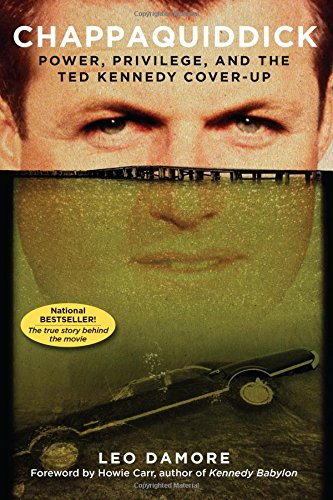 In July, 1969 Senator Ted Kennedy gave a nationally televised speech in which he explained (most implausibly) the actions that resulted in the drowning death of Mary Jo Kopechne on Chappaquiddick Island. Kennedy even claimed that he had actually begun to wonder himself “whether some awful curse did actually hang over all the Kennedys.”

It was a smart, if shameless, ploy for Ted to invoke his dead brothers, given the enormous public sympathy the Kennedys enjoyed back then. In reality, however, most Kennedy tragedies are just acts of reckless selfishness that end badly. Nevertheless, the Kennedy Curse is very real. It just takes a different form than that which the Kennedy Family wants you to believe.

Indeed, we recently saw the fruits of this curse at work in Ayanna Pressley’s victory over Rep. Mike Capuano in the Democratic primary for the Massachusetts 7th Congressional District. [Ayanna Pressley’s Victory: A Political Earthquake that Reflects A Changing Boston, by Katharine Q. Seele and Matt Flegenheimer, New York Times, September 2018]]

Although the Massachusetts congressional map has altered over the years due to redistricting, the 7th Congressional District , encompassing parts of Cambridge, northern Boston, and surrounding areas, essentially remains the same geographic district that John F. Kennedy once represented [Democrats Measure Their Desire For Change in JFK’s Old District, by Eric Bradner, CNN, September 1, 2018].

Prior to Kennedy, this area was represented in Congress by former Boston Mayor James Michael Curley. Curley was the  first politician to successfully stoke anti-Historical Nation malice as a campaign tactic as he constantly inveighed against the “Yankees” who were allegedly persecuting the Irish they had generously allowed to immigrate into the country.

The ever-corrupt Curley, however, was then suffering serious legal and financial problems, and he essentially sold his congressional seat to Joseph Kennedy Sr, so that Jack Kennedy could run in his place. Kennedy bailed out Curley financially and rented Jack an apartment in Boston that Jack rarely used, preferring instead to spend most of his time at his spacious home on Cape Cod. 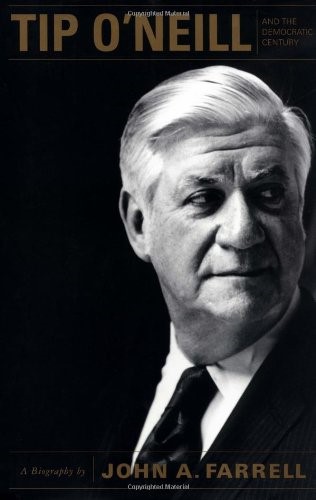 After Jack was elected to the Senate, Thomas “Tip” O’Neill took his place. O’Neill was an enthusiastic supporter of Ted Kennedy’s 1965 Immigration Act and spent his entire career venting his neuroses on the historical American nation in the form of Open Borders, Affirmative Action, and forced integration. [Tip O’Neill and the Democratic Century, by John A. Farrell, 2001]

In fact, when Federal Judge Arthur Garrity (a former Kennedy campaign aide, who was nominated for a federal judgeship by Senator Ted Kennedy) ordered forced busing in the Boston Public Schools in June, 1974—eleven weeks before the start of school—O’Neill actually supported Garrity’s decision. Then House Majority Leader O’Neill consistently ducked his white constituents who vehemently opposed forced busing, and actually voted against a constitutional amendment that would have prohibited forced integration (J. Anthony Lukas’ Common Ground is the book to read on O’Neill and busing). It was at this point that large numbers of Boston’s white working class gave up and began to move out of the city for good [Whites Still Fleeing Cities in Mass, by Peter Schworm and Matt Carroll, Boston Globe, March 24, 2011].

In 1983, Speaker O’Neill was a stubborn supporter of Amnesty and consistently refused to allow a vote on any enforcement legislation because he wanted to court the Hispanic vote. [Immigration O’Neill Style, New York Times, October 9, 1983]

In one of his final acts in office, O’Neill worked to pass the 1986 Simpson-Mazzoli Amnesty, with the help of many Republicans, and convinced President Reagan to sign it by making toothless promises about increased enforcement.

Having won a final victory against the historical American nation, O’Neill retired from Congress and cashed in with a $1 million advance for a memoir and even appeared in some television commercials. Of course, the demographics of Tip’s district had changed dramatically during his tenure. But that didn’t matter because, like JFK, Tip’s real home had long been on Cape Cod far removed from the diversity he celebrated in public. Tip quickly sold his district residence and lived full-time on the Cape, where he even chose to be buried.

So Mike Capuano didn’t exactly have big shoes to fill when he succeeded Joseph Kennedy II in 1998. Capuano, like his predecessors, consistently denigrated the interests of his white constituents by supporting open borders (NumbersUSA F-) and racial preferences (98% approval rating from the NAACP). Capuano was so Left-wing that he even won the endorsement of the Congressional Black Caucus over his black primary opponent. [John Lewis And Other Black Leaders Reject Black Female Challenger In Boston, by Adedamola  Agboola, Black Enterprise, May 23, 2018]

As we all now know, none of that mattered. Prior to this year, Capuano had never received less than 80% of the vote in an election. But this year, Capuano, a ten-term incumbent who graduated from Dartmouth, lost by 17 points to a college dropout simply because he was the wrong color. In fact, Capuano barely won his hometown of Somerville, where he has lived his entire life and once served as mayor. [Town-By-Town Results: Pressley's Huge Margin In Boston Propelled Her Well Past Capuano, by Benjamin Swasey, WBUR, September 5, 2018]

So who is Ayanna Pressley? Pressley is the daughter of a—hold onto your hats—a community organizer from Chicago.[ Sandra Pressley, 63; was mother of city councilor, By Laurie D. Willis, Boston Globe, July 14, 2011] There she attended the progressive Francis Parker School then moved to Boston to attend Boston University (where she failed to graduate). It also is rumored that she has never been able to pass a driving test.

More importantly, Pressley obtained her political start in Boston by, of course, working for the Kennedy family. Pressley held a variety of positions in Congressman Joe Kennedy’s office and then, upon his retirement, became a senior aide for Ted in his Boston constituent office. After Ted’s death, Pressley ran for the Boston City Council, receiving an avalanche of positive free press for being the first minority female to serve on it.

However, the only thing Pressley really achieved on the Boston City Council was a reputation for being extremely difficult to work with. She has been a constant irritant to her colleagues due to her obsession over racial microaggressions and Black Lives Matter politics [Mike Capuano Was Dead Man Walking, by Howie Carr, Boston Herald, September 2018]

Nevertheless, Pressley chose to run for Congress against a well-funded ten-term incumbent. On the campaign trail, Pressley called for the abolition of ICE, tearing down the border fence, increased racial preferences, etc. According to Pressley, her most important qualification was that she was a minority and her opponent was white. [‘Change Can’t Wait’: Ayanna Pressley on Primary Win, Bid for Congress, by Meghna Chakrabarti, WBUR, September, 2018]

Indeed, Pressley’s campaign was so Leftist that even the Kennedys would not endorse her.  [Facing a Tough Primary, Capuano Gets Some Support From Joe Kennedy III, by Nik De Costa-Klipa, Boston Globe, August 27, 2018 ]

Certainly, Pressley had vulnerabilities. For example, Pressley’s husband, Conan Harris, has a rap sheet going all the way back to the 7th grade and served ten years in prison for drug dealing. [Drug unit nets Cambridge man, 18, By Jon Auerbach, The Boston Globe, September 18, 1994] And yet today he is the Deputy Director of Public Safety for the sanctuary city of Boston.[The balance between choice and circumstance, By Adam Glanzman, Niyah Gonzalez, Rachel Grozanick and Brilee Weaver, The Margins, 2017]

You can’t make this stuff up.

Now how many times do you think Mike Capuano brought up Pressley’s husband’s rap sheet during the campaign? Or her failure to graduate from college? Or her reputation on the Boston City Council? Or the rumor that she has been unable to pass a driving test?

MA-7 is now a district dominated by Cambridge liberals and minorities.[ Though The 7th District Is Minority-Majority, Most Of Its Voters Are White, by Steve Koczela, WBUR, February 09, 2018] 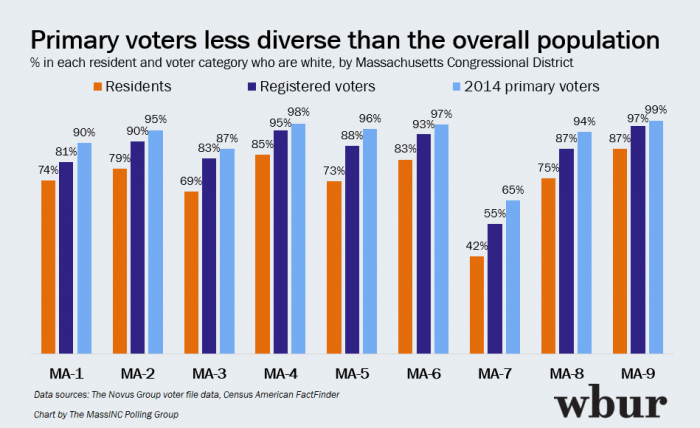 Ayanna Pressley will probably serve as long as she likes. But it didn’t have to be this way. If it weren’t for the demographic change that the Kennedys and their acolytes ushered in, someone who looked like Mike Capuano or John F. Kennedy would still be able to get elected there.

In the gift shop of the John F. Kennedy Presidential Library, you can still purchase tacky signs that read “No Irish Need Apply.” Those signs, of course, probably never actually existed in the Boston area, or anywhere else. But there is effectively a new sign now hanging over the congressional district that once sent two Kennedys to Congress: No Whites Need Apply.

So it looks like Ted Kennedy was right after all. A curse does indeed hang over all the Kennedys, over the Democratic Party, and over the entire country.

The central question of our time is whether the country will ever be able to survive it.