So Much Sexual Violence And Harassment From Democrats: "Reckoning" With Bill Clinton, Ted Kennedy, And Chris Dodd

With all the revelations of sex crimes among the smart set, The Atlantic reminds us that it’s time for a “reckoning with Bill Clinton,” recalling just what he got away with and who defended him. He got away with rape and sexual assault, and his main defenders were feminists such as Gloria Steinem.

The New York Times chimes in with its take on the problem on Capitol Hill, which isn’t news to anyone, least of all the victims of Sens. Ted Kennedy and Chris Dodd.

Let us not forget the late Michael Kelly’s description of the blotto pair in GQ. 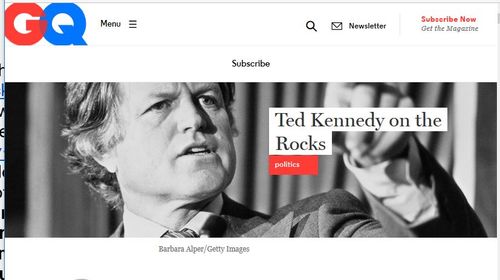 Brasserie I: In December 1985, just before he announced he would run for president in 1988, Kennedy allegedly manhandled a pretty young woman employed as a Brasserie waitress. The woman, Carla Gaviglio, declined to be quoted in this article, but says the following account, a similar version of which first appeared in Penthouse last year, is full and accurate:

It is after midnight and Kennedy and Dodd are just finishing up a long dinner in a private room on the first floor of the restaurant's annex. They are drunk. Their dates, two very young blondes, leave the table to go to the bathroom. (The dates are drunk too. “They’d always get their girls very, very drunk,” says a former Brasserie waitress.) Betty Loh, who served the foursome, also leaves the room. Raymond Campet, the co-owner of La Brasserie, tells Gaviglio the senators want to see her.

As Gaviglio enters the room, the six-foot-two, 225-plus-pound Kennedy grabs the five-foot-three, 103-pound waitress and throws her on the table. She lands on her back, scattering crystal, plates and cutlery and the lit candles. Several glasses and a crystal candlestick are broken. Kennedy then picks her up from the table and throws her on Dodd, who is sprawled in a chair.

With Gaviglio on Dodd's lap, Kennedy jumps on top and begins rubbing his genital area against hers, supporting his weight on the arms of the chair. As he is doing this, Loh enters the room. She and Gaviglio both scream, drawing one or two dishwashers. Startled, Kennedy leaps up. He laughs. Bruised, shaken and angry over what she considered a sexual assault, Gaviglio runs from the room. Kennedy, Dodd and their dates leave shortly thereafter, following a friendly argument between the senators over the check.

Eyewitness Betty Loh told me that Kennedy had “three or four” cocktails in his first half hour at the restaurant and wine with dinner. When she walked into the room after Gaviglio had gone in, she says, “what I saw was Senator Kennedy on top of Carla, who was on top of Senator Dodd's lap, and the tablecloth was sort of slid off the table 'cause the table was knocked over—not completely, but just on Senator Dodd's lap a little bit, and of course the glasses and the candlesticks were totally spilled and everything. And right when I walked in, Senator Kelly jumped of f… and he leaped up, composed himself and got up. And Carla jumped up and ran out of the room.”

From all available evidence, God created our elected officials to drink and screw around.

According to Loh, Kennedy “was sort of leaning” on Gaviglio, “not really straddling but sort of off-balance so it was like he might have accidentally fallen…He was partially on and off…pushing himself off her to get up.” Dodd, she adds, “said ‘It's not my fault.’ “ Kennedy said something similar and added, jokingly, “Makes you wonder about the leaders of this country.”

Giving Kennedy the benefit of the doubt, it’s quite possible he did not intend an assault but meant to be funny, in a repulsive, boozehead way. Drunks are notoriously poor judges of distance, including the distance between fun and assault.

Brasserie II: On September 25, 1987, Kennedy and a young blonde woman—identified by several sources as a congressional lobbyist—allegedly got carried away at a wine-fueled lunch in a private room upstairs and succumbed to the temptations of the carpet, where they were surprised in a state of semi-undress and wholehearted passion by waitress Frauke Morgan. The room, located next to the restrooms, is secured only by a flimsy accordion door, which could not be fully closed. Morgan declined to be interviewed for this story or to comment on or refute the accounts of other sources.

However, waitress Virginia Hurt, who says Morgan described the scene to her shortly after witnessing it, recalls, “He was on the floor with his pants down on top of the woman, and he saw her and she just kind of backed away and closed the door. The girl didn’t see Frauke. So Frauke went downstairs and told the manager and [another waitress] overheard.”

A waitress to whom Morgan spoke just after the incident says, “She told me … she went up to offer them coffee and when she opened the door…there they were on the floor.” Morgan said explicitly, the other waitress goes on, that Kennedy had his pants down and his date "had her dress up," and the two “‘were screwing on the floor.’”

Says another waitress to whom Morgan immediately related the episode, “She said she had walked in to ask them if they needed anything else before she gave them the check, and she just sort of found Senator Kennedy on top of this [woman] on the floor and they were sort of half under the table and half out.”

A copy of La Brasserie's reservation list for that day shows that a luncheon table for two in the back room was reserved for Kennedy. A copy of the check, signed “Edward M. Kennedy,” shows he was billed for two bottles of Chardonnay.

Of course, this doesn’t count the small matter of Kennedy’s killing a girl.

One wonders why women put up with these violent, insanely abusive, Democratic men. Some say, as the ACLU lobbyist told The New York Times, they feared for their careers.

Maybe, but more than likely, it’s all about abortion, as we knew from what media bigshot Nina Burleigh said of Clinton: “I'd be happy to give him [oral sex] just to thank him for keeping abortion legal. I think American women should be lining up with their Presidential kneepads on to show their gratitude for keeping the theocracy off our backs.”

She wasn’t too worried, apparently, about all the Democrats on their backs.