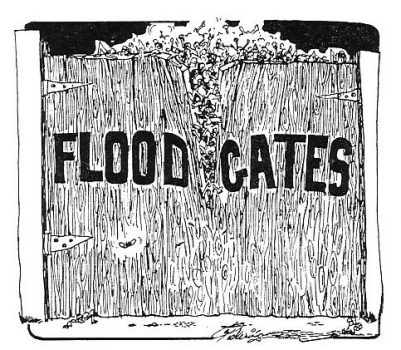 1965 Immigration Act: It Couldn't Have Been a Mistake Because It Would Have Been a Huge One

I see an ever-increasing amount of argumentation from brute numbers like this: liberals in the past couldn’t possibly have been imprudent upon immigration policy because, uh, now there are 59 million immigrants here: Q.E.D! In your face!

The quality of argumentation stays at about the same level as the headlines:

IMMIGRATION is not the easiest issue to debate.

It stokes emotions about “homelands” and invasions, as we have seen all summer, both in the Republican presidential contest and in the tragic situation in Europe. These arguments tend to produce more heat than light, making objective analysis difficult.

Why the **** don’t all you inbred nativist xenophobes just shut the **** up and agree with the calm, smart people that the 1965 Immigration Act was awesome?

Many politicians find that their poll numbers rise the further from reality they stray — as the Donald J. Trump playbook continues to prove. A recent Pew report confirms that the parties remain far apart, with Republicans far more certain than Democrats (53 percent versus 24 percent) that immigration is making our society worse.

But history provides some clarity about the relative costs and benefits of immigration over time. Fifty years ago this month, Lyndon B. Johnson signed the Immigration and Nationality Act of 1965 at the foot of the Statue of Liberty. By any standard, it made the United States a stronger nation. The act was endorsed by Republicans and Democrats in an era when cooperation was still possible. Indeed, the most serious opposition came from Southern Democrats and an ambivalent secretary of state, Dean Rusk. But it passed the Senate easily (76-18), with skillful leadership from its floor manager, Senator Edward M. Kennedy, and Johnson himself.

And if you don’t trust the long term strategic judgment of strategic wizard LBJ and the drunkest Kennedy, well, I just don’t know what to say …

… But it also was a success when measured by a more conservative calculus of hard power. It certainly increased American security. Significant numbers of immigrants and their children joined the United States military after 1965, and in every category the armed forces became more ethnically diverse.

And that, children, is why the U.S. military does such a great job of guarding the border today. Oh, wait …

All right, the point is that we have to bring in refugees like the Tsarnaev Brothers in order to secure traditional American interests in Chechnya, Ingushetia, and Dagestan. Don’t you care about American Security?