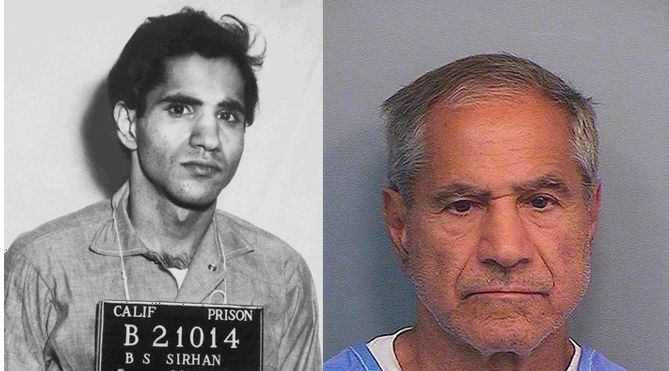 Sirhan Sirhan, a Palestinian immigrant, murdered Robert F. Kennedy in 1968. Sirhan is mentioned in Alien Nation, (1995) as the antitype of the immigrant entrepreneur or valedictorian.

In his Afterword to Alien Nation, Peter Brimelow wrote

...Jacquie Miller in the Ottawa Citizen worried—all too presciently, for what it is worth—that "phrases can be plucked out of Brimelow's book that, shoved only slightly out of context, provide ammunition [for the inevitable charge of racism]. She instanced my references to high black crime and Laotian welfare rates. Miller also felt that the "credibility" of my account of Robert Kennedy's ludicrous underestimate of Asian immigration resulting from the l965 Act  somehow suffered from what she described as "a typical slur": my adding that "tragically, Robert Kennedy himself was to be assassinated by an immigrant counted by the INS as Asian."

My first reaction to this sort of thing, of course, is incredulity. I believe truth should be an absolute defense, as it is in libel law. Laotians do have disproportionately high welfare rates etc. And I said "tragically," didn't I?

Still, I recognize a problem. There is no point in repelling readers, at least those who show Ms. Miller's symptoms of open-minded ness.

The problem, however, is not easily resolved. The truth, we are told after all, shall set us free. And it is precisely because of the media's flinching from facts that many Americans are unaware of the immigration dimensions of major contemporary public policy dilemmas. It is because Americans are never reminded of the Jordanian origins of Kennedy's assassin, Sirhan Sirhan, that they don't think to put him at the head of a list of infamous immigrants to counter the immigration enthusiasts' silly ploy of reeling off, in place of argument, the names of distinguished immigrants. In fact, many Americans can't think of a list of infamous immigrants at all—another example of the one-way nature of the immigration debate.

Well, Sirhan is still with us, in spite of having been stabbed in prison a couple of weeks ago [Man Convicted of Killing Robert F. Kennedy Stabbed at Donovan State Prison: Source, by Rafael Avitabile, NBC San Diego, August 30, 2019].

That led to this exchange on Twitter between Seth Mandel and Eugene Kontorovich: 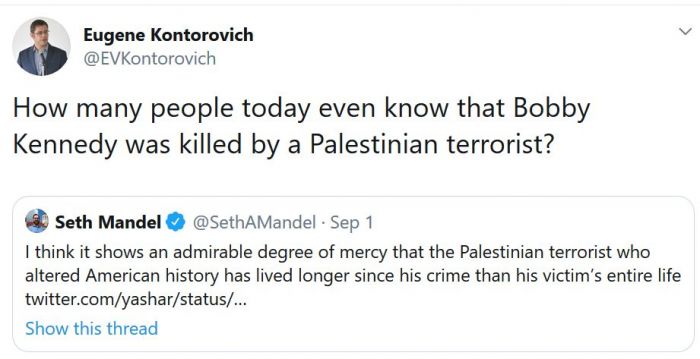 Kontorovich is right to say that nobody is taught this, but  Mandel is wrong to say that Sirhan's survival is the result of an "admirable degree of mercy."

In 1969, First Degree Murder carried the death penalty in California, carried out in the gas chamber.

Sirhan's WikiPedia article, as of today, explains why Sirhan, though caught at the scene with the gun that killed RFK in his hand (pinned under bodyguard Roosevelt Grier's foot), wasn't executed.

The answer involves what we call "Kritarchy," judges (real ones, this time) defying both law and justice on the subject of the death penalty. (Emphases added.)

Despite the fact that Sirhan admitted his guilt in a recorded confession while in police custody on June 9, a lengthy, publicized trial followed in The People of the State of California v. Sirhan Sirhan. The judge did not accept his confession and denied his request to withdraw his plea of "not guilty" in order to plead "guilty".[18]

On February 10, 1969, Sirhan's lawyers made a motion in chambers to enter a plea of guilty to first-degree murder in exchange for life imprisonment rather than the death penalty. Sirhan told Judge Herbert V. Walker that he wanted to withdraw his original plea of not guilty in order to plead guilty as charged on all counts. He also asked that his counsel "dissociate themselves from this case completely." The judge asked him what he wanted to do about sentencing, and Sirhan replied, "I will ask to be executed."[18] Walker denied the motion and said, "This court will not accept the plea." He also denied Sirhan's request for his counsel to withdraw; his counsel entered another motion to withdraw from the case of their own volition, but Walker denied that too.[18] Walker subsequently ordered that the record be sealed pertaining to the motion.[19]

The trial proceeded, and opening statements began on February 12. The lead prosecutor in the case was Lynn "Buck" Compton, a World War II veteran of Easy Company fame who later became a justice of the California Court of Appeal.[20] David Fitts delivered the prosecution's opening statement, providing examples of Sirhan's preparations to kill Kennedy. The prosecution showed that Sirhan was seen at the Ambassador Hotel on June 3, two nights before the attack, to learn the building's layout, and that he visited a gun range on June 4. Alvin Clark, Sirhan's garbage collector, testified that Sirhan had told him a month before the attack of his intention to shoot Kennedy.[18]

Sirhan's defense counsel included attorney Grant Cooper, who had hoped to demonstrate that the killing had been the impulsive act of a man with a mental deficiency. But Walker admitted into evidence pages from three of the journal notebooks Sirhan had kept that showed the murder was premeditated and "quite calculating and willful."[18] On March 3, Cooper asked Sirhan in direct testimony if he had shot Kennedy; Sirhan replied, "Yes, sir," but then said that he did not bear Kennedy any ill will.[18] Sirhan also testified that he had killed Kennedy "with 20 years of malice aforethought." He explained in an interview with David Frost in 1989 that this referred to the time since the creation of the State of Israel. He has maintained since then that he has no memory of the crime, or of making that statement in court.[21]

Cooper asked Sirhan to explain his reasons for attacking Kennedy, and Sirhan launched into "a vicious diatribe about the Middle East conflict between Arab and Jew."[18][22] Defense counsel Emile Zola Berman, who was Jewish, was upset by Sirhan's statements, and expressed his intention to resign from the defense team. Cooper eventually talked Berman out of resigning, and he stayed until the end of the trial.[18]

The defense based its case primarily on the expert testimony of Bernard L. Diamond, M.D., a professor of law and psychiatry at the University of California, Berkeley who testified that Sirhan was suffering from diminished capacity at the time of the murder.[23]

Sirhan was convicted on April 17, 1969, and was sentenced six days later to death in the gas chamber. Three years later, his sentence was commuted to life in prison, owing to the California Supreme Court's decision in The People of the State of California vs. Robert Page Anderson, which ruled that capital punishment is a violation of the California Constitution's prohibition against cruel and unusual punishment. The February 1972 decision was retroactive, invalidating all existing death sentences in California.[19]

The people of California immediately passed Proposition 17, but there were no executions in California until 1992, because the Supreme Court made a similar ruling in Furman v. Georgia, all part of the Judiciary's huge pro-crime push of the 1970s.