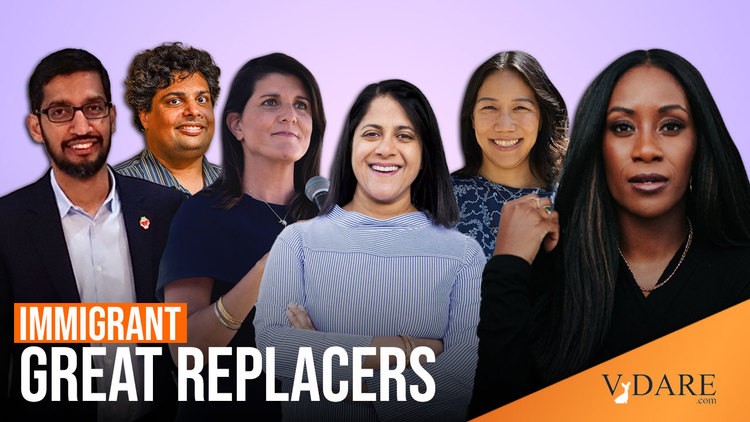 Beware of Overclass Immigrants Who Want To Dispossess White America

Republicans who denounce illegal immigration, but then stress the “need” for more legal immigration, as VDARE has said through the years, aren’t just myopic: they are blind to the reality that immigration will soon change the country permanently, and perhaps create conditions that are beyond repair. One reason legal immigration is particularly dangerous: It is creating an “overclass” of skilled immigrants who will leverage their professional success and financial power to greatly hasten white dispossession, and bring about the Great Replacement.

Several examples should give us pause:

Born in Madurai, India, Sundar Pichai, the CEO of Alphabet Inc. and its subsidiary Google, is one of the most prominent overclass immigrants in corporate America.

Under Pichai’s watch, Alphabet Inc. has taken to censoring the Right. This website fell victim to Big Tech’s witch hunt in 2020 when Alphabet subsidiary YouTube booted VDARE off the platform for supposedly violating rules that prohibit “hate speech.” YouTube has become a private censorship arm for the anti-white occupation regime and will continue to misuse its global power until anti-censorship laws govern the social media giants, which have become the equivalent of public utilities.

Remember what Pichai promised: To eliminate “borderline content”: “Content which doesn’t exactly violate policies, which need to be removed, but which can still cause harm.”

Similar assaults on free speech will only intensify as foreigners occupy key positions in Big Tech and politics. Unlike the white Europeans who preceded them, for instance, America’s new, non-white immigrants don’t much care about defending the First Amendment.

Heer, born in India and The Nation magazine’s National Affairs correspondent, is a vile creature who constantly peddles anti-white hate on social media. A Canadian national and former editor at the New Republic magazine, Heer is part of a transnational cadre of rootless cosmopolitans who take great pleasure in insulting whites for an easy paycheck.

In May, a Twitter user called Aditya Ingole dug up several of Heer’s tweets from 2018, when he vociferously bragged about hastening the Great Replacement.

We will replace you. Leftist always claim innocence while for the last 10 years their whole platform was demographic is destiny. I remember articles proclaiming the permanent majority in congress fir democrats. pic.twitter.com/rOhtUr1XLn

Heer repeatedly tweeted “We will replace you.” One of the tweets he posted on October 28, 2018, went as follows:

Pro-tip: only response to make to an internet Nazi is ‘We will replace you.’

In a long thread on October 27, 2018, Heer discussed the Tree of Life Synagogue shooting and its link to anti-Semitism. The anti-Semitism narrative is a worn-out card the Regime Media use to dismiss legitimate concerns about the effects of mass migration. Heer went with his usual “we will replace you” shtick, but then took it to another level by responding this way to a now-suspended user: “You lost in 1865 and in 1945. We will replace you.”

Unlike the other figures here, Nikki Haley, was born (“Nimrata Randhawa”) in the U.S. She is arguably the most prominent Indian in Republican politics. As governor of South Carolina (2011-2017) and former ambassador to the United Nations, Haley has built an enviable national profile.

And unlike her anti-white, Indian counterparts on the Left, Haley is far from shrill. She’s a smart political operator and knows the party she represents is still predominantly white. She tailors her message accordingly.

Still, after the mass shooting at a black church in Charleston in 2015, then-Governor Haley obsequiously bowed down to the howling communist mob and its Regime Media Information Ministry, and ordered the removal of the Confederate battle flag from the State House [Confederate flag removal prompts dueling rallies at SC State House, by Madeline Stewart, WIS NEWS 10, July 10, 2021].

Anti-Confederate sentiments and the iconoclastic hatred of Confederate and Southern symbols, not least the statues that came down in Richmond, Virginia after the Floyd Hoax, are simply proxies for generalized anti-white hate. They’re stepping stones for the anti-white Left’s ultimate goal: erasing America’s white history. Spineless conservatives don’t recognize this and have gladly gone along. Non-white Republicans such as Haley, with no ancestral attachment to the country that took them in, are accelerating it.

Although born in Desoto, Texas, Karen Attiah is of Nigerian-Ghanaian extraction and one ornery anti-white journalist to boot.

Her academic record is not too shabby (discounting Affirmative Action). She received a bachelor’s degree from Northwestern University and a Master of Arts in International Affairs from Columbia University’s School of International and Public Affairs in 2012.

Unsurprisingly, those academic credentials, coupled with her non-white background, made her an easy fit as Global Opinions Editor at the Washington Post. On any given day, she publishes a vociferously anti-white propaganda piece. She takes full advantage of the bullhorn the Post handed her to routinely spew anti-white vitriol. For instance—ludicrously, given her privileged position—whites  don’t let black women have their voices heard [America hates to let Black women speak, by Karen Attiah, Washington Post, October 8, 2020].

She’s even called for the Texas Rangers baseball team to change its name. For Attiah, naming a baseball franchise after the storied lawmen is a bridge too far. She thinks the Texas Rangers were racist because they were too tough on non-white criminals.

During the initial stages of the China virus, many East Asian-American grievance peddlers had to get their licks in against whites. While East Asians are much calmer and more intelligent than the overwhelming majority of nonwhites, the most opportunistic and conniving among them enthusiastically participate in the programmatic bashing of whites.

Jia Lynn Lang, now National Editor at the New York Times, exercised her East Asian privilege—high IQ, non-white—to attack whites throughout the China virus pandemic. She was particularly bothered by the alleged “torrent of anti-Asian racism in America” when the pandemic began.

If Yang has referred to the spate of black-on-Asian violence, I’d be a tad sympathetic to her and her fellow Asians’ plight. But her complaints were directed against white America and its egregious sin of racism towards Chinese and Japanese [When Asian-Americans Have to Prove We Belong | This isn’t the first time we’ve been treated as a threat, by Jia Lynn Yang, New York Times, April 10, 2020]. The op-ed promoted her book One Mighty and Irresistible Tide: The Epic Struggle Over American Immigration, 1924-1965.

Scott Greer did a great takedown of the book on one of his IQ Supplement episodes on his Highly Respected Substack page. The major takeaway is that the Hart-Celler generation of immigrants and their progeny hold uniquely hostile views to the Historic American Nation.

Our own @Steve_Sailer on: "Jia Lynn Yang's Disloyalty: Concept of "Citizenism" Has Not Exactly Caught on"https://t.co/e0OiWF7dIZ

They don’t care about American traditions and will enthusiastically join the latest anti-white bacchanalia.

Yang’s book could be viewed as the anti–Alien Nation given its glorification of immigrant struggles and dismissal of the legitimate concerns of the Historic American Nation.

Yang’s Op-Ed is a puff-piece for her book, One Mighty and Irresistible Tide: The Epic Struggle Over American Immigration, 1924-1965. It's like https://t.co/5EONqfQvGK Editor Peter Brimelow’s ALIEN NATION in reverse. https://t.co/by4bv2B5zk

Saira Rao is another strange specimen who takes great pleasure in using her activist position to pillory whites, but she isn’t just any unhinged anti-white hellraiser. She is the U.S. daughter of Indian immigrants and a seasoned anti-white professional. She formerly clerked for the United States Court of Appeals for the Third Circuit and worked as a lawyer on Wall Street. 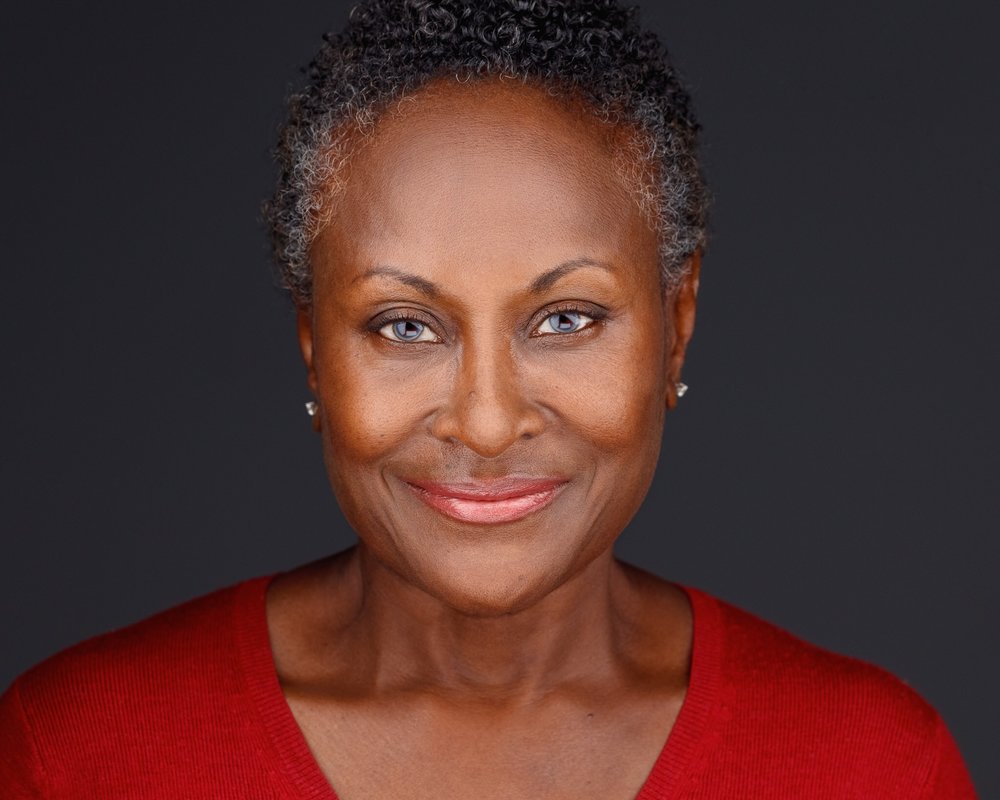 In her bio at Race2Dinner, an ethnic grievance lobby, Rao claims that “she wasted her precious time aspiring to be white and accepted by dominant white society” while pursuing a professional career.

Rao “began the painful process of dismantling her own internalized oppression” by transitioning towards anti-white activism. She set up a publishing company, In This Together, ran a failed congressional campaign as a candidate for Colorado’s 1st district (mostly Denver, 63% white) and then helped found Race2Dinner (at which liberal white women paid up to $3000.00 to learn how racist they were) with fellow ethnic grievance hustler Regina Jackson, right (and below).

A growing number of women are paying to confront their privilege – and racism – at dinners that cost $2,500 https://t.co/pitH6Ewe3y

On social media, Rao is openly anti-white. She has openly expressed her disgust with the United States by declaring that “The American flag makes me sick.” Rao finds racism in every nook and cranny of American society.

Rao recently teamed up with Jackson to write White Women: Everything You Already Know About Your Own Racism and How to Do Better, which is set to be released at year’s end. One can only imagine the anti-white venom that will fill its pages. 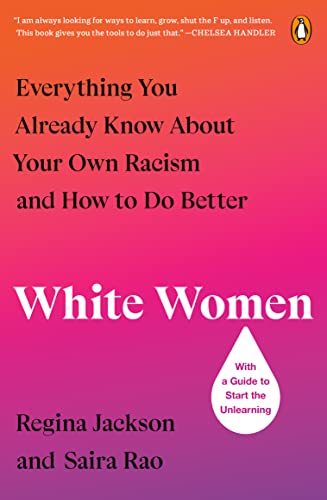 America’s Leftist high-skilled immigrants are amassing considerable wealth, power, and social prominence, with which they are building a vast network of anti-white elites who will dictate the country’s multicultural course.

Things will only worsen if GOP policy makers don’t get serious about restricting all immigration. That means clamping down on the legal immigration mainstream Republicans countersignal immigration patriots about.

Like all predictable political disasters, the forthcoming demographic dispossession of the Historic American Nation can be stopped. Legislation in the 1920s is a model for immigration reform that could preserve America’s European identity. Ideally, we’d have a U.S. Ruling Class that goes the extra mile by implementing an immigration moratorium, a desperately needed measure to prevent the anti-white Left from achieving electoral hegemony and turning the country into a veritable Tower of Babel.

The country faces a civilizational emergency. Half-measures won’t stop it.

Pedro de Alvarado is a Hispanic dissident who is well aware of the realities of race from his experience living throughout Latin America and in the States.