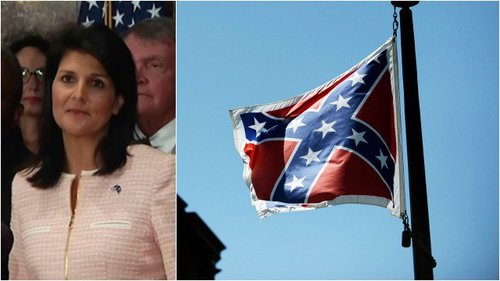 Today, the SPLC’s Hatewatch Blog approvingly quotes Think Progress that the Confederate Battle Flag is only a “supposed symbol of cultural heritage.” [Threats Over Confederate Flag Even as it Comes Down in SC, Don Terry, July 9, 2015]. Coincidentally, video of SPLC founder Morris Dees praising the Confederate Flag in 1989 at the time of the dedication of the Civil Rights museum in Montgomery Alabama has emerged. Dees then stated “The Confederate Flag that's flying over that capital today is just as much a part of my heritage as Dr. King's March down 6th Avenue.”

Perhaps Dees’ own heritage is “supposed.”

The Southern Poverty Law Center has long been in the vanguard of pushing to take down the Battle Flag. In 1992, it filed a lawsuit in Holmes v. Hunt, where it managed to use an obscure law to take the flag off the Alabama State Capital. At the time, Dees attacked Alabama Governor Guy Hunt, stating, “Hunt’s support of the [Confederate] flag was just an extension of his racist campaign” [FLASHBACK: SPLC Founder Says Confederate Flag Is ‘Part Of My Heritage’, Chuck Ross, Daily Caller, July 9, 2015].

This provides a useful backdrop to Governor Nikki Haley signing a bill to remove the Confederate flag from a war memorial in front of the State Capital in South Carolina.

When Nikki Haley called for removing the Flag from the Capitol grounds, Yahoo News reported that Dees said the Governor was “late to the issue.” He further contended that “She could not have gotten elected, I’m sure, had she taken this position when she was running for office, because of the racism that honestly exists in South Carolina” [South Carolina Gov. Nikki Haley calls for removal of Confederate flag, by Dylan Stableford, June 22, 2015].

Dees' remarks are instructive. By saying Haley for being “late to the issue,” he is criticizing her for not denouncing the flag until it was politically expedient. Yet the difference is merely that it became politically expedient for Dees and the SPLC a few decades earlier than for Haley.

By noting that opposing the flag while running for office would have been impossible due to "racism," he’s acknowledging that the majority of South Carolinians support the flag—although implying that only racists would support it.

Haley is receiving a great deal of backlash for taking down the flag. We will see if she will be able to successfully run for office again.

If not, she can still win a Profile in Courage Award.