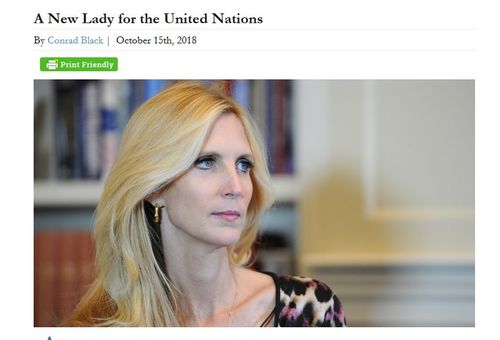 Now That Nikki Haley's Gone From The UN, Replace Her With Ann Coulter

Last week I offered my suggestion for a new U.N. Ambassador, following Nikki Haley's resignation. My suggestion was: Kermit the Frog.

That doesn't seem to have gotten much traction among our diplomatic decision-makers. Former newspaper mogul Conrad Black, however, has come forth with a different suggestion that's almost as good and considerably more likely to be taken up: Ann Coulter.

I think that's a great idea. Putting a gadfly like Ann into the U.N. General Assembly to laugh and jeer at the pompous seatwarmers who inhabit the place, would add immensly to the gaiety of nations. People would actually watch the U.N.'s dry-as-dust proceedings just to see Ann kick up that dust.

I bet our President likes the idea, too. Now, if only he can get it past the wall of Never Trump saboteurs he confronts in the State Department.