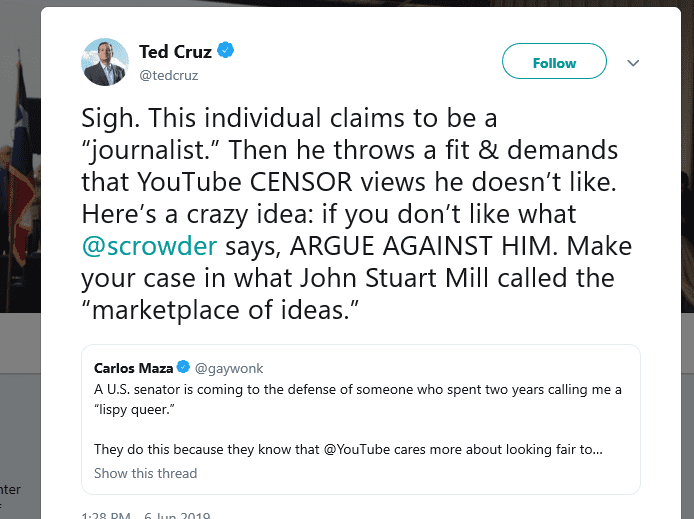 Tech Totalitarianism hit a new crescendo last week with Google-owned YouTube’s purge and disturbing revelations about Pinterest, a social media site used mostly by women for collecting pictures. It is now indisputable that the tech giants have a systematic bias against patriots and conservatives, which increasingly being extended to long-established Respectable Right factions like the Pro-Lifers. There are things GOP lawmakers could do, but only slightly better signs they might do them. However, the increasingly-Woke Democrats are proposing action—because they want to INCREASE repression. If they win in 2020, God help America, and VDARE.com.

The YouTube purge was supposedly triggered by VOX.com personality Carlos Maza. In viral tweets, Maza whined that YouTube tolerated homophobia and bigotry (he’s openly homosexual as well as Cuban Hispanic ) by allowing the very moderate conservative comic Steven Crowder to insult him on the platform. YouTube idemonetized Crowder and dozens of other right-wing accounts. And it deleted numerous channels and erased hundreds of videos.

Perhaps because the purge was driven by some sort of algorithm, if not outsourced to foreigners unaware of the nuances of American debate, several non-conservatives were affected. History teachers and even Leftist journalists had accounts were deleted over “offensive” material, such as historical footage from World War II. [YouTube blocks history teachers uploading archive videos of Hitler, by Jim Waterson, The Guardian, June 6, 2019]

In a clearly coordinated move, the push to censor YouTube was egged on by the New York Times. The Paper Of Record published a front-page story on how one young man was “radicalized” by YouTube’s algorithm and began briefly to believe horrible things like America should reduce immigration and there are only two genders, before being debated out of it by a “transgender woman” YouTuber. This would appear to validate free speech, but the NYT clearly thought YouTube should alter its algorithms to hide dangerous right-wing content. [The Making of a YouTube Radical, by Kevin Roose, June 8, 2019]

And YouTube’s parent company appears to be getting the message. Google CEO Sindar Pinchai said his company would do more to eliminate “borderline content”—"Content which doesn't exactly violate policies, which need to be removed, but which can still cause harm." [Google CEO defends YouTube practices, by Ina Fried, Axios, June 9, 2019]

In an Orwellian twist, Project Veritas was suspended from Twitter shortly after the report’s release. [Twitter Restricts Project Veritas for Exposé of Pinterest Blacklists, by Lucas Nolan, Breitbart, June 12, 2019]

The one bright spot, relatively speaking: the conservative and Republican response. In the past, conservative mouthpieces have said tech censorship is bad but private mega corporations have the right to silence whoever they want. This time was different. Even minicon Daily Wire editor Ben Shapiro complained about YouTube’s decision and warned that the Left was exploiting Big Tech to attack the Right. His video on the matter (How The Left Uses Big Tech Against The Right, June 11, 2019 below) was a marked improvement from his days where he urged conservatives to just start their own Twitter. “It’s actually much closer to monopolistic interference than it is to free markets or free minds,” Shapiro said of the collusion between Corporate media and Big Tech against conservatives.

Shapiro correctly noted that journofa are threatening tech giants with bad press unless they crack down on their enemies and business rivals.

Shapiro does not offer a solution, however.

This is nuts. YouTube needs to explain why @scrowder is banned, but @iamsambee (“Ivanka is a feckless c***.”) & @JimCarrey (“look at my pretty picture of Gov. Kay Ivey being murdered in the womb”) aren’t. No coherent standard explains it. Here’s an idea: DON’T BLACKLIST ANYBODY. https://t.co/F6ez8XHzXS

Sigh. This individual claims to be a “journalist.” Then he throws a fit & demands that YouTube CENSOR views he doesn’t like. Here’s a crazy idea: if you don’t like what @scrowder says, ARGUE AGAINST HIM. Make your case in what John Stuart Mill called the “marketplace of ideas.” https://t.co/uzhMqz3lv5

But, as we have learned from Donald Trump’s many tweets, words are no substitute for action.

What Cruz and other Republicans should do is re-examine Section 230 of the Communications Decency Act of 1996. It protects tech platforms from publisher liabilities such as libel because they offer a “forum for a true diversity of political discourse.” The Watcher has written before that the most realistic option for challenging tech censorship is looking at this regulation. Alas, as yet no reported action from Republicans. But the Democrats, on the other hand, are taking a look at Section 230-—to insist Big Tech censors more.

The popularity of a slow-motion video of House Speaker Nancy Pelosi (nothing that the late-night Leftist “comedy” shows haven’t done to Trump) incensed Democrats, who notoriously are not used to criticism. They demanded Facebook take it down. Pelosi and others questioned how Section 230 protects platforms from publisher liability. The implication: they would take a second look at this law to get what they want [Pelosi video fuels ‘deepfake’ fears, by Alexandra S. Levine, Politico, June 5, 2019]

“.@Facebook’s failure to appropriately address intentional political disinformation harms its users, the public discourse, and our democracy. Sec 230 is meant to enable platforms to take down harmful content. It should not be a shield for inaction,” Democratic New Jersey Rep. Frank Pallone tweeted in late May.

.@Facebook’s failure to appropriately address intentional political disinformation harms its users, the public discourse, and our democracy. Sec 230 is meant to enable platforms to take down harmful content. It should not be a shield for inaction. https://t.co/HMJ9ARhKo9

The threat worked and Facebook took down the video.

If Democrats can have this effect with one threat, why won’t Republicans should follow their lead?

[O]ur Constitution protects a lot of speech that we want online platforms to moderate…Hate speech is a great example. Last year a white supremacist sued a social media platform for banning him for violating its policies and lost – thanks to 230.

[Congress has a critical decision to make about future of the Internet, Fox News, June 8, 2018]

That “white supremacist” is American Renaissance Editor Jared Taylor, who was banned from Twitter for journalism documenting the implications of The Bell Curve and for advocating race realism in the most respectful manner possible. For the record, Taylor denies that he is a “White Supremacist,” in its literal sense of advocating white rule over minorities, and merely argues that whites have rights. In addition, the litigation that Beckerman refers to is actually ongoing.

But Beckerman, who claims to be “a conservative who worked in Republican politics for decades,” argues it’s too horrible for minorities to have Mr. Taylor to express his views over social media and Section 230 empowers Big Tech to silence him. That’s why the Silicon Valley Social Justice Warriors don’t want Congress to re-examine it.

That’s is why lawmakers should re-examine it.

It’s critical to note here that “Hate Speech” is an offense unknown to American law. It simply means speech that Leftists don’t like and want to suppress. Of course, this raises the question of why a self-proclaimed “conservative” like Michael Beckerman is so anxious to agree with the Left.

Cruz, Josh Hawley, and others should threaten Big Tech’s Section 230 protection over the recent censorship. Both of those senators have noticed the regulation and wanted it amended. They are leaders in this fight and they need to take action ASAP. Section 230 should be made to state specifically that the platforms must offer neutral forums free of viewpoint discrimination.

That would be the ideal, but Republicans could have an effect just by calling a hearing on the matter. Tech execs very much do not want to be grilled by lawmakers on how they operate more like publishers than platforms, given for example Twitter spokesman Carlos Monje’s disastrous performance when asked by Senator Cruz whether a blocked quote from Mother Teresa constituted “Hate Speech.”[Twitter Exec Freezes Up as Ted Cruz Grills Him on Company's Inconsistent Rule Enforcement, by Charlie Nash, Breitbart, April 10, 2019]

Personally, I think Section 230 angle is the best tactic against Big Tech. But there is the alternative idea of making platform access a civil right. However, this is a radical idea that GOP lawmakers are probably too cautious to adopt—and sources say it has less chance in court.

One positive development that shows Republicans may finally take against tech malfeasance: The Federal Trade Commission and Department of Justice recently agreed to conduct antitrust investigations against multiple tech giants. The FTC would look into Amazon and Facebook while the DOJ would investigate Google and Apple. [Alphabet, Apple, Amazon and Facebook are in the crosshairs of the FTC and DOJ, by Jonathan Shieber, TechCrunch, June 3, 2019]

The news sent Big Tech stocks plummeting, putting the squeeze on tech giants without any ruling.

The antitrust investigations don’t address censorship as such. But they do challenge the power of the tech giants. A DOJ ruling that Google operates as a monopoly that unfairly squashes competition would chip away at the giants’ tremendous power and lead to reform. It may even encourage free speech alternatives to grow and challenge Big Tech’s dominance.

It would also put these companies on notice that the Trump administration will use its power to check their abuses. They would then know that Trump’s angry tweets about tech censorship aren’t entirely powerless. In turn, tech execs may think twice about the suppression of right-wing opinions.

But the antitrust investigations are not enough. Congress and the President must target Section 230.

Given the now-total domination pf the Main Stream Media by partisan Leftists, Republicans may well never win another national election if dissenting views are not allowed on social media.

The YouTube purge and the Pinterest revelations should be the final straw. The time to act is now.