Jeet Heer’s New Republic hit piece The Great White Dope , triggered by Pat Buchanan’s excellent column, The Great White Hope, got one fact right: Buchanan was the forerunner to Donald Trump and thus has “special authority” to opine on him. [New Republic, May 31, 2016]  Yet almost everything else Heer writes is hopelessly wrong—and reveals his own anti-white animus. You could almost say, to make another boxing analogy currently much in the news, that Buchanan Rope-A-Doped Heer.

Heer’s objections to Buchanan’s column, which celebrates how white men are rallying around Trump because he “unapologetically berates and mocks the elites who have dispossessed them, and who despise them,” begins with its title. It’s a reference to boxer Jess Willard who knocked out black heavyweight champion Jack Johnson.  Heer thinks this is “disturbing” because Jack London first coined the sobriquet for Jim Jeffries, another white opponent of Johnson, and

when Johnson defeated Jeffries on July 4, 1910, white mobs went on rampages all over America, in twenty five states. They killed at least 20 people and injured hundreds more. 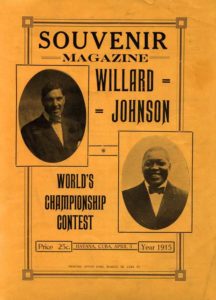 Heer appears to have taken his history lesson from Wikipedia, which described the aftermath of the Johnson-Jeffries bout:

[W]hite mobs attacked or lynched black citizens in revenge. In all, riots occurred in more than 25 states and 50 cities. At least twenty people were killed across America from the riots, and hundreds more were injured.[Jack Johnson, edit of May 28, 2016]

Note that Wikipedia uses the passive voice: “at least twenty people were killed,” noting only the recipient, but not the agent, while Heer attributes the deaths to the “white mobs.”  Yet just browsing a few of the contemporary articles shows that both blacks and whites perpetrated violence. A few examples

This is not to say that whites did not violently target innocent blacks after the riots.  But back then, a “race riot” meant an actual two-way riot between the races, rather than blacks burning down their own neighborhoods.

Heer’s knowledge of modern cinema is no better.  He mocks Buchanan’s observation that Hollywood no longer celebrates white male heroes as it did in the 1950s:

In what world does Buchanan live where popular culture—including stories of detectives, cops, and war heroes—isn’t overwhelmingly dominated by white men? No less than seven of the 10 movies of 2015 feature white male heroes, whether they were roguish ex-smugglers (Star Wars: The Force Awakens), Navy veterans (Jurassic World), superheroes (Avengers: The Age of Utron), street racers (Furious 7), political revolutionaries (The Hunger Games), astronauts (The Martian), or spies (Spectre).

But let’s look at these films:

Jurassic World and The Martian both had white male leads.

Thus, only four of the ten top films had white male heroes, and in two of them—Spectre and the Avengers—the creators changed characters that had been white for decades from white to black.

Furthermore, it is foreign markets, not American white male privilege, that ensure that superhero movies do not always have black leads.  As Bill Maher has noted: “The dirty little secret is most movies are made now with an eye to the foreign market, and Asians really are racist.” [Bill Maher Whitesplains Hollywood’s Diversity Problem: It’s China’s Fault, by Greg Evans Deadline, January 23, 2016]

This may have seemed arbitrary and absurd when Updike penned his satire in 1957. But if it’s still common knowledge that white men almost exclusively built this country, why did virtually no one, including “conservatives,” other than Trump and Buchanan object to replacing great white men like Andrew Jackson with black female footnotes to history like Harriet Tubman?

Heer denies that whites are losing all but the slightest bit of power. But at the same time, he’s worried that “with Obama as the figure proving both that the nation has changed and that it will transform even more in the future, the once-marginal ideas of Buchanan were ready to be seized by a candidate like Trump in a successful bid for the Republican nomination.”

This begs the question: if Obama changes and transforms the country, does this benefit the white males?  Heer certainly does not think so.  In the past, he wrote: “The privilege Trump is defending is particular one: the white privilege displaced by changing demographics & social norms.”   And he criticized Trump for wanting to return to “John Wayne's world” where the “white man [is] on top.” [Trump as a True Scotsman, Storify, January 19, 2016]

Heer further called Trump “the voice of aggrieved privilege—of those who already are doing well but feel threatened by social change from below, whether in the form of Hispanic immigrants or uppity women” .[Donald Trump Is Not a Populist. He's the Voice of Aggrieved Privilege., New Republic, August 24, 2015]

Assuming for the sake of argument that White males have “privilege,” where did it originate from?  Did they steal it from the Indians?  Did a racist god grant it to them?

Or was it bequeathed from their ancestors who conquered and defeated the Indians, the British, and the Wilderness and created a nation “for ourselves and our posterity?”

As Stephen Douglas put it more bluntly in the Lincoln-Douglas debates (which ended, remember in his defeating Lincoln in the 1858 Illinois Senate race) “this government was made . . . by white men for the benefit of white men and their posterity forever.”

Our country has since erased many of the social and political privileges to white men, and has gone far beyond that in granting privileges to everyone else.  Neither Pat Buchanan nor, especially, Donald Trump (who still appears to support anti-white racial preferences, a.k.a. “Affirmative Action”) advocate turning the clock back.

Yet rather than express gratitude for the white men who voluntarily ceded their own power in the name of egalitarianism, Heer sneers at Buchanan and Trump supporters for not wanting to further their own dispossession, mocking their concerns as selfish “aggrieved privilege.”

Heer should take his own advice.  He describes Buchanan’s column as a “parody” no less than four times.  Yet if he is really worried about Trump ushering in a new age of Buchananism, he should try to refute their arguments and premises through reason (a notoriously white concept) rather than emotion.

As his failed polemic demonstrates, however, even the Left’s intellectuals like Heer have little to offer besides snark and Wikipedia.