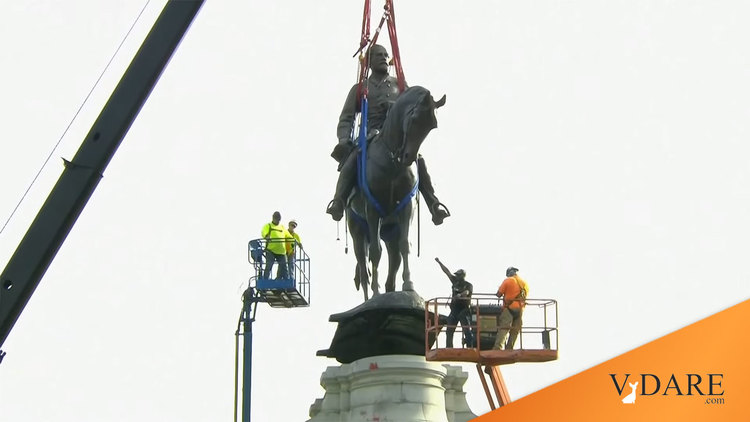 The Leftist government in Richmond VA removed the magnificent Robert E. Lee statue that was the jewel of Monument Avenue last week to the cheers of black and white Communists and useful idiots. Fittingly, a black-owned construction company finished what BLM vandals began after last year’s Floyd Hoax Riots, breaking the statue in the process [BLM Crowd Sing and Cheer as Richmond’s Robert E. Lee Monument Is Removed After 131 Years and Cut In Half, by Jennifer Smith and Michelle Thompson, Daily Mail, September 8, 2021]. Of course, most prominent Republicans skedaddled into the bushes…except for one: POTUS 45. Donald Trump rode to the sound of the guns. It was a “desecration,” he said in an undeniably powerful statement. “Our culture is being destroyed and our history and heritage, both good and bad, are being extinguished by the Radical Left, and we can’t let that happen” [Statement by Donald J. Trump, 45th President of the United States of America, Save America.com, September 8, 2021]. But stopping our culture being destroyed means ending nation-breaking immigration.

It was a long time coming. For years, Virginia Democrats vowed to erase Old Dominion’s Confederate heritage. And it won’t stop at Confederates. They also demand that Thomas Jefferson and other Founding Fathers be erased. Immigration was a key weapon in their march to victory, most notably in once-solid Red Northern Virginia.

Though the push to erase the past began before the Unite the Right patriot rally in Charlottesville rally four years ago, it accelerated afterward. The trouble in Thomas Jefferson’s hometown gave Virginia’s Democrats the excuse they needed to press ahead [After Charlottesville, Va. Democrats see opening to change 114-year-old monuments law, by Antonio Olivo, The Washington Post, August 25, 2017].

The iconoclastic push to erase the past is odd given that the Old Dominion actually boasts of its rich history, a major tourist draw. Why would anyone visit Richmond if they can only see the grim remains of Monument Avenue?

Answer to the paradox: The descendants of the people who built these monuments are being replaced by interlopers who hate them more than they value economics. Most mainstream political analyses of Virginia’s Blue shift claim that it’s mainly due to white suburbanites fleeing the GOP. That’s true up to a point. But the explanation overlooks that the state has become less white since the days Republicans won state-wide races.

The changes are particularly noticeable in Northern Virginia. In 2000, Fairfax was 64 percent white. But whites are now less than half (47.1 percent) of the county’s population [Fairfax County now Virginia’s second most diverse county, new census data shows, by Matt Blitz, Tysons Reporter, August 13, 2021]. Loudoun County was more than 82 percent white in 2000. Now its white population stands just under 54 percent. Prince William County was 69 percent white in 2000. Now it’s Virginia’s “most diverse” county: 41.7 percent of its population is white. Fairfax is the second-most diverse.

These changes are reflected at the ballot box. In the 2000 presidential election, Fairfax, Loudoun, and Prince William Counties all went for George W. Bush. Up until 2018, Loudoun, part of Virginia’s 10th congressional district, was represented by GOP RINO Rep. Barbara Comstock. Now these counties are solid blue. Joe Biden won all three by lopsided margins[Virginia Election Results 2020 | Live Map Updates | Voting by County & District, January 6, 2021]. In Fairfax, he won more than 70 percent of the vote. He won by nearly 63 percent in Loudoun and Prince William. In 2019’s state election, Democrats ousted Republicans from the few seats they still held, decisively won previously competitive seats, and took control of county boards in Loudoun and Prince William [Democrats take control of Va. legislature, 2 DC-area county boards, by Rick Massimo and Max Smith, WTOP, November 6, 2019]. These results gave them the majority in both the Senate and the House of Delegations, allowing them to change the laws to eliminate Virginia’s heritage.

And what happened to the Confederates is also happening to the Founding Fathers. Two schools in Falls Church, named after Thomas Jefferson and George Mason, replaced their namesakes because the men owned slaves [Two Virginia schools honored by 'Founding Fathers' who owned slaves will be renamed, by Khalida Volou, WUSA9, April 28, 2021]. The University of Virginia “contextualized” its statue dedicated to Jefferson, the school’s founder, last year. The new “context” will discuss Jefferson’s ownership of slaves and racism [UVA aims to contextualizing Thomas Jefferson statue in front of Rotunda, by Daniel Grimes, WVIR, September 17, 2020]. It’s only a matter of time until Jefferson gets what Lee got. Charlottesville’s black mayor Nikuyah Walker described Jefferson as a lecherous slaver (based on the discredited Jefferson-Hemings myth) in a bizarre poem earlier this year. She also compared the city she represents to a rapist [Charlottesville mayor criticized for graphic poem about city, by Justine Coleman, The Hill, March 24, 2021].

All whites before 1900 are subject to racism accusations, and their role in the founding can’t save them from cancellation. The new Virginians don’t care about the Founding Fathers. They only care about non-white heroes.

Virginia isn’t the only former Confederate state that will see its entire heritage replaced because of demographic change. Leftists want to destroy Georgia’s incredible Stone Mountain that honors Lee, Davis, and Jackson [Confederate Imagery On Stone Mountain Is Changing, But Not Fast Enough For Some, by Emil Moffat, NPR, June 21, 2021]. In North Carolina, they want to tear down the Tar Heel State’s remaining Confederate landmarks [A new push to remove Confederate monuments from North Carolina courthouses, by Billy Corriher, Facing South, February 23, 2021]. Leftists in Texas want to cancel the Alamo [Alamo renovation gets stuck over arguments about slavery, by Richard Webner, The Washington Post, May 10, 2021].

All three states are a lot less white:

If demographic trends continue, no one will be around to defend white America’s heritage.

With the notable exception of Trump, Republicans are generally worthless on this issue. Virginia GOP gubernatorial candidate Glenn Youngkin isn’t talking about the statues. Several Republican lawmakers happily supported the removal of Confederate statues from the Capitol earlier this year [McCarthy Doesn’t Mind Removing Confederate Statues, Since They’re All ‘Statues Of Democrats’, by Henry Rodgers, The Daily Caller, June 29, 2021]. But despite their uselessness, we can at least count on them to not be the ones to push for this erasure. That’s the Democrats’ imperative.

Demography is destiny. Only a white majority country will honor the white heroes who built it. A new people means new heroes who look like the new people. The immigrants swarming Northern Virginia don’t see themselves in the Founding Fathers. They don’t see great men. They see white racists.

Virginia’s storied Confederate past is being erased. But whites are still a majority in the state. Only an immigration moratorium can ensure they are not replaced like all those statues.