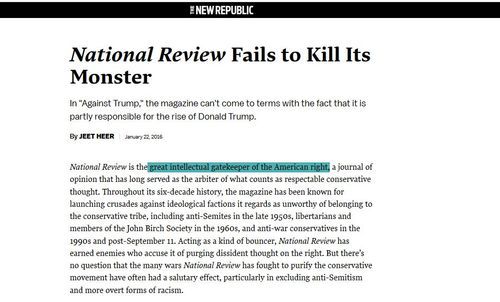 Not only is the Trump-trumped MSM exhuming my late friend Sam Francis in its effort to figure out what going on, I've even had a couple of taps on my own coffin. One of them was from the New Republic's Jeet Heer:

Decades from now, when historians try to figure out the genealogy of Trumpism, they will have to pay careful attention to the pages of National Review in the 1980s and 1990s, when a crucial debate was being played out between neo-conservatives and paleo-conservatives. Although National Review ultimately sided with the neo-conservatives, it gave ample room to such paleo-conservative voices as Joseph Sobran, Peter Brimelow, John O’Sullivan, and Samuel T. Francis. Even after these writers were purged from the magazine, the white identity politics they argued for was taken up by other National Review writers, albeit in more muted and coded form. This paleo-con tradition created the idea of a politics centered around immigration restriction and a more robustly nationalist foreign policy (including trade policy). Many of these writers seeded the ideas that helped form the alt-right, which is the faction on the right that is most enthusiastic for Trump. [National Review Fails to Kill Its Monster, January 22, 2016. Links and emphases added].

This is perceptive of Heer, although like Reason's Nick Gillespie he's really just trying to Keep Up The Skeer, in the words of a great American, and further panic the National Review Girly Boys.

And it's particularly a shrewd thrust, because "white identity politics" was the smear of Pat Buchanan ("a form of identity politics for white people") employed by NR Senior Editor Ramesh Ponnuru, the poisonous Indian hermaphrodite dwarf suicidally hired and mentored by O'Sullivan, in his notorious 1999 NR cover story A Conservative No More which was an early symptom of Conservatism Inc.'s disastrous derailment of the post-Reagan Republican Party.

Buchanan, of course was not motivated by racial animus, and Ponnuru was simply accomodating (typical of the post-purge National Review) the Leftist line.

But in a grander sense, of course Buchanan's movement was "white identity politics"—because whites are America. Any nationalist and patriotic movement in the U.S. must be implicitly white, because America has historically been a white nation (not withstanding an imperfectly integrated black minority). And until the 1965 Immigration Act no-one would have questioned the fact.

Ponnuru and Heer (who is apparently also of Indian stock) are simply part of the process by which the Historic American Nation is being euchred out of its state.