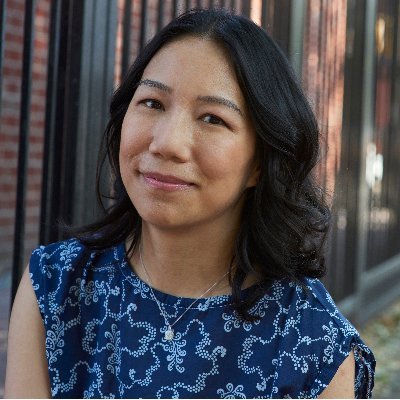 I’m still sick with the China Virus although my fever has broken. And Steve Sailer’s post about The New York Times’s professional Chinese whiner Jia Lynn Yang [Tweet her] pictured right,  whose title is “deputy national editor” got my attention on Easter Sunday, so I read the article he refers to. It didn’t help my Paschal Lamb go down any easier.

It’s called When Asian-Americans Have to Prove We Belong | This isn’t the first time we’ve been treated as a threat, New York Times, April 10, 2020.

Some things about it were no surprise. In addition to the typical moaning of a privileged Person-Of-Color about how discriminated-against she and hers are in white America—she was born in Alexandria, Virginia, to post-1965 immigrants from Shanghai—it was no revelation to learn that she had perfected her self-serving solipsistic grievance-mongering at—where else?—Yale, a relic of “white supremacy” that was so racist that it admitted her.

Does “Jia Lynn” imagine for a moment that Yale would have let her in had she been a white American named Jane Lynn Yates? Or that The New York Times could be persuaded to hire her? 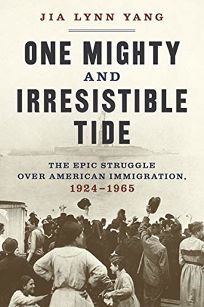 Equally, her hagiographic narrative about Japanese American Citizens League activist and WWII veteran—on our side—Mike Masaoka and his attempts to punish America for admitting his family by undermining American immigration law are standard New York Times.

Yang’s Op-Ed is actually a puff-piece for her upcoming book, One Mighty and Irresistible Tide: The Epic Struggle Over American Immigration, 1924-1965.

Published 25 years and one month after VDARE.com Editor Peter Brimelow’s Alien Nation, it appears to takes a distinctly different line.

Truly no surprise that Jia-Lynn thought this nation-breaking sequence of events was a fine and wonderful progress. Indeed, her triumphalist title makes clear her belief —unquestionably shared by the people who run the The New York Times—that the Great Replacement of the American people by, well, most anybody else is both inevitable and good.

But then J-L’s potted history of how American immigration policy was rigged in favor of everyone except actual Americans strays into the quicksands of Noticing. As a creature of POC privilege, she obviously has never been forced to realize that Noticing can be harmful to the over-perceptive observer.

The tale of how the nation-breaking immigration changes of 1965 were forced down Americans’ throats usually focuses on Ted Kennedy as prime mover. But, as already mentioned, Ted Kennedy was no more than a face. We’re not supposed to Notice who was pulling young Ted’s strings.

A few quotes from her article, itself excerpted from the book:

The Chinese Exclusion Act of 1882 had banned the immigration of Chinese laborers, and in 1924, Congress enacted a new set of ethnic quotas dreamed up by eugenicists [The idea that the 1924 Act was inspired by eugenics has been repeatedly debunked.] aimed at maintaining their conception of America as a white and Anglo-Saxon nation. By designating some races as more desirable than others, the law sharply restricted Jewish and Italian immigration — and banned nearly all Asians.

In the years that followed, a small group of Jewish lawmakers fought to abolish the quotas. In 1952, when Congress embarked on its most ambitious overhaul of the country’s immigration system in decades, they recognized their best opportunity in a generation. …

But defeating the overall quota system proved more difficult. With the Red Scare at its zenith, lawmakers were wary of admitting Eastern and Southern European immigrants, whom they associated with radical political activity. And so to the dismay of Jewish leaders, lawmakers refused to abandon ethnic quotas giving preference to countries like Britain. …

Winning the right to naturalize [in the McCarran-Walter Act of 1952] was a watershed moment in Asian-American history. But the fight left others bitter. “It is impossible to compute the amount of harm which the Japanese American Citizens League and Masaoka caused to effective opposition to this legislation,” concluded an analysis conducted by the American Jewish Congress.

It would take 13 more years of pressure from Jewish lawmakers and activists and support from the Irish Catholic Kennedy family before race-based quotas were finally abolished from the country’s immigration system. (emphases added throughout)

To Jia-Lynn, this is all self-evidently good. But it’s a whole lot of Noticing, in only a few paragraphs. It will be interesting to see how the Main Stream Media receives her book. Some may conclude this is Too Much Information for the rubes in flyover country.

It’s not usually career-enhancing for a non-Jewish journalist to be so frank about such things. We’ll see how things go for Jia Lynn Yang.

Ordinarily one shouldn’t want any journalist harmed for being honestly thorough.

In Jia-Lynn’s case, though, an exception may be warranted…

Henry McCulloch [Email him] is a American lawyer with extensive international experience. He has lived in France, England and Mexico and is fluent in French, Spanish and Italian.