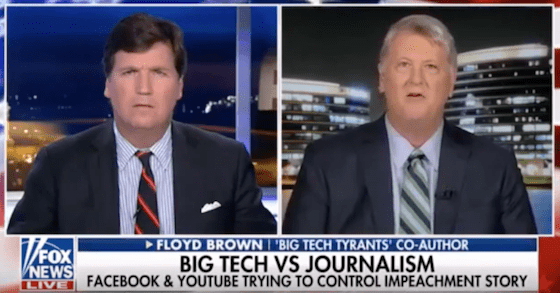 There has been a growing clamor against the heavy hand of Big Tech meddling in political and cultural affairs in the United States. Concerned citizens complain, but Washington has done nothing to diminish the extreme power of Google in particular.

Prof. Robert Epstein has warned against Google’s use of its Search function to influence voters to embrace the liberal side.

Last July, the Senate held a hearing titled Google and Censorship through Search Engines where Dennis Prager testified that Youtube (owned by Google) had restricted access to 56 of PragerU’s 320 five-minute videos that explain history and politics to young people because schools have become so deficient.

Silicon Valley investor and PayPal co-founder Peter Thiel has accused Google of improperly working with Red China, including “the seemingly treasonous decision to work with the Chinese military and not with the US military.” 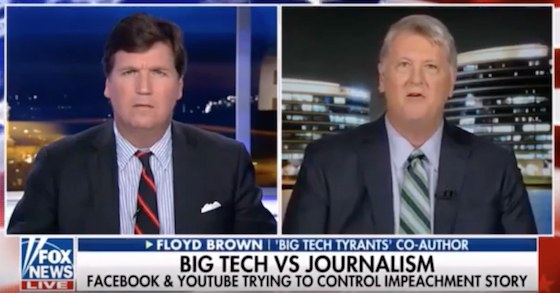 Brown says he is “terrified” at the unbridled power of Big Tech—as well he should be.

TUCKER CARLSON: So you’d think that we’d have a free press in this country — we’re guaranteed it in the Bill of Rights, but it’s not exactly free anymore. Big tech controls it and the tech companies are doing everything they can to shape the narrative, the storyline around impeachment.

For example, Facebook and YouTube, which control a much larger percentage of digital media than anyone realizes are now censoring, flat out censoring any material that mentions the name of the man believed to be the whistleblower. They’re not letting you know who this guy is.

Floyd Brown is co-author of “Big Tech Tyrants.” And he joins us tonight. So Floyd, it seems to me that we’ve moved to a stage a year out from a Presidential election, where the tech monopolies, which really control all of digital journalism in this country, are deciding what facts we’re allowed to know. Why should we not be terrified?

AUTHOR FLOYD BROWN: We should be terrified, and I am terrified. The truth is, is that over half of all news consumed by Americans is consumed on these social media platforms.

And when they can censor the way they’re censoring right now –both Facebook and Google around the name of this whistleblower — it’s chilling. It’s absolutely chilling.

CARLSON: So I mean, look, there’s a legitimate debate here. Let me just say that no one in Fox has told me what to do or not on that issue despite a lot of reporting to the contrary, I haven’t named the guy because I haven’t confirmed it. I can’t find anybody who will confirm it. But as soon as we do, we will I mean, that’s, you know — that’s journalism, and you may disagree.

But the point is this guy, whether he is the whistleblower or not, is at the center of a really important news story, and the average person ought to be able to make up his or her mind on that, but we’re not allowed to, because the tech monopolists won’t allow us. So why is Congress standing back and not saving us from this? Seriously.

BROWN: Yes, well, it’s amazing to me that a lot of the publications that you know, publish things like the Pentagon Papers, and have, you know, published almost all of what WikiLeaks released, and time and time again, they have been more than willing to publicize things that are the deepest secrets of the U.S. government.

But here this one particular secret, they’re so good at keeping the name of this whistleblower out of the media and you know, there’s been major changes in tech since Donald Trump was elected. And those major changes are all around keeping Donald Trump’s — really his ideas and his message — from reaching people.

CARLSON: Yes, I noticed that.

CARLSON: So this is much greater interference. I mean, this is an interference on a scale that Putin for all of his determination to hack our democracy never even approached or could have imagined. Purportedly American companies are putting a thumb on the scale of democracy and nobody is saying anything about it, why?

BROWN: They should be and Congress should be investigating them.

These companies have all grown incredibly large. You know, in my book, “Big Tech Tyrants,” I talk about the amount of data that has been collected on individuals. Americans don’t have any idea of the volume of information from medical records to you know, what they Google, to what they’re looking at, every single page of the internet that they visit is recorded somewhere.

And, yet people should be rebelling against that. And frankly, it’s a very dangerous situation.

CARLSON: Well, it is.

BROWN: When you see this kind of censorship, this is worse than what you would imagine from Putin and the Soviets.

CARLSON: These people are not your friends.

CARLSON: Meanwhile, I think Republicans control the Senate. I think it’s not just Josh Hawley, he is not the only U.S. Senator, where are the rest of them? It would be interesting to know.

CARLSON: I am sorry, but my lecturing is as put us over the edge, this this topic is worth being mad about. Thank you for your book. Thank you for coming on tonight. I appreciate it. I wish we had more time.