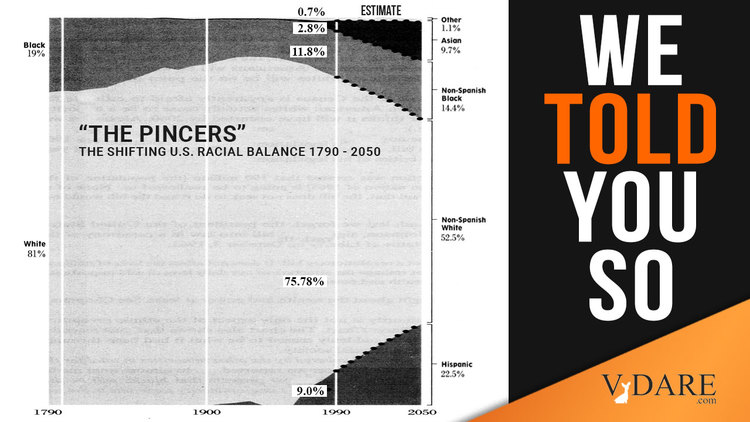 Earlier: The Great Replacement: Cat Out Of Bag, Democrats Frantic 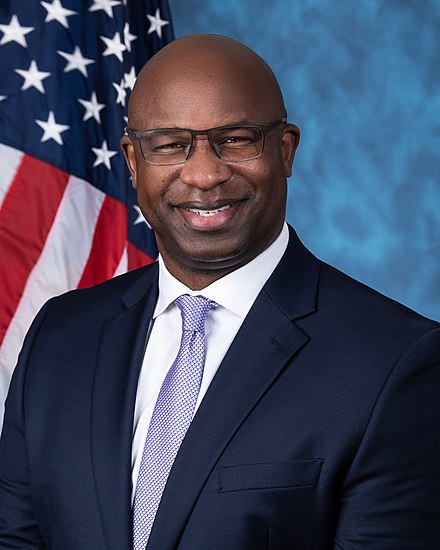 House Democrats condemned the Great Replacement this week. No, not the immigration policies that are leading to the dispossession of the Historic American Nation. Instead, they just denounced those who have Noticed what’s going on. Every Republican voted against resolution, but only two Democrats (Maine Rep. Jared Golden and Michigan Rep. Elissa Slotkin). It claimed the Great Replacement “has been used to falsely justify racially motivated, violent acts of terrorism domestically and internationally” and committed Congress to “combating White supremacy, hatred, and racial injustice.” “The Great Replacement myth is a racist, antisemitic, Islamophobic, xenophobic, nativist and hateful lie,” said New York Rep. Jamaal Bowman, right, the resolution’s sponsor [House Democrats Pass Resolution Condemning ‘Great Replacement Theory’, by Mychael Schnell, The Hill, June 8, 2022]. But the condemnation can’t suppress the truth. It’s just more evidence that the Great Replacement now drives the political discourse in America–and Democrats can only look on in shock.

Rep. Bowman is one of those in shock. He admits Great Replacement, which he calls “Nazi thinking,” is now mainstream. “These are no longer fringe elements of our society,” the black congressman said. “'Great Replacement Theory has gone mainstream thanks to rightwing Republicans like Tucker Carlson who have mentioned this theory more than 400 times on the most-watched news network in the country.” [Democratic Rep Jamaal Bowman calls Great Replacement Theory 'Nazi thinking veiled as political banter', by Morgan Phillips, Daily Mail, June 8, 2022].

He’s right, of course. VDARE.com Editor Peter Brimelow charted the Great Replacement (“The Pincers” —see our featured image) in his book Alien Nation back in 1995, but Tucker Carlson is certainly responsible for waking up millions of Americans to this civilizational problem.

And concern over the Great Replacement is now shared by a majority of Republicans.

Other polls are finding similar results. The Southern Poverty Law Center conducted a poll in April that also showed most Republicans believe in the Great Replacement. In the communist group’s survey, 47 percent of Republicans believe it’s negative that America will no longer majority-white (just 28 percent see it as a positive); 53 percent believe changing demographics pose a threat to whites, their culture, and values; and 68 percent believe the recent demographic changes in our country are driven by progressives wanting to replace white conservative voters [SPLC Poll Finds Substantial Support for ‘Great Replacement’ Theory and Other Hard-Right Ideas, by Cassie Miller, Southern Poverty Law Center, June 1, 2022].

It’s clear the Republican base is gravely concerned about being replaced. They know it threatens their way of life and their values. They know it will lead to more conflict among the races and weaken America. This is no longer a “fringe” idea.

As I highlighted last month, more and more Republican leaders are also Noticing the Great Replacement. From Elise Stefanik to Blake Masters, serious GOP lawmakers or candidates are speaking out about how Democrats want to replace Americans with foreigners. And some of these candidates are starting to notice other racial problems.

Masters, the Trump endorsed Arizona Senate candidate, recently acknowledged the color of crime. “We do have a gun violence problem in this country, and it’s gang violence,” he said during an April podcast appearance. “It’s people in Chicago, St. Louis shooting each other. Very often, you know, black people, frankly. And the Democrats don’t want to do anything about that.” [Blake Masters Blames Gun Violence on ‘Black People, Frankly’, by Roger Sollenberger, Daily Beast, June 5, 2022]

Masters, of course, is right that it’s black people behind the crime wave. FBI crime data shows that blacks were responsible for 56.5% of all murders in 2020 where a suspect was identified. The true number is probably higher when accounting for unsolved murders. The media branded Masters a racist for simply stating this obvious truth.

Thankfully, he chose to ignore the controversy and did not issue any mealy-mouthed apology.

Democrats are very worried that the American people are becoming aware of their dispossession. But instead of doing anything to address the causes of dispossession, they’re utilizing state power to crack down on those who dare mention it.

The Associated Press reported last week that federal officials are directing more resources to monitoring social media for alleged “white nationalist” threats. The AP claims “white supremacists are riling up thousands on social media.” Free speech is not a crime—yet—but the Regime Media and left-wing bureaucrats behave as if it is:

Their snarky memes and trendy videos are riling up thousands of followers on divisive issues including abortion, guns, immigration and LGBTQ rights. The Department of Homeland Security warned Tuesday that such skewed framing of the subjects could drive extremists to violently attack public places across the U.S. in the coming months.

They signal their beliefs in other ways: a Christian cross emoji in their profile or words like “anglo” or “pilled,” a term embraced by far-right chatrooms, in usernames. Most recently, some of these accounts have borrowed the pop song “White Boy Summer” to cheer on the leaked Supreme Court draft opinion on Roe v. Wade, according to an analysis by Zignal Labs, a social media intelligence firm. [White Supremacists Are Riling Up Thousands on Social Media, by Amanda Seitz, Associated Press, June 10, 2022]

This extremely mild behavior apparently requires the primary attention of Homeland Security and the FBI. The collapse of the southern border is just not as important as alleged racists talking about “White Boy Summer” on Telegram.

There’s also DHS’s infamous Disinformation Governance Board. This project, which has since gotten a new leader in former Bush official Michael Chertoff, is dedicated entirely to monitoring right-wing speech on the internet. Leaked documents reveal that the board was particularly concerned with “falsehoods surrounding U.S. government immigration policy.” Translation: any information that discredits Open Borders or points out the reality of the Great Replacement.

But it’s unlikely these efforts will succeed. The federal government can’t take Tucker Carlson off the air, nor can they blind ordinary people to the dramatic changes they see all around them.

Regular Americans know the Great Replacement isn’t a conspiracy theory–it’s a fact of life. And they want it stopped.