The Real Threat To U.S. National Security: Mexico Is A Failed State

Everyone and his dog talks about Russia’s invasion of Ukraine or China’s coming invasion of Taiwan. But for America First patriots, the No. 1 security question is at our southwest border with Mexico, and not just with the Great Replacement Invasion of illegal aliens. What’s occurring inside Mexico should be of greater concern than developments in Eastern Europe and the Far East. For nearly two decades, the Mexican government has been losing a brutal drug war against drug cartels, which are not only smuggling tons of deadly narcotics and other drugs across the border, but also establishing cartel branches in American cities. There’s a real question whether the Mexican government is even trying [Abrazos no Balazos? The Mexican State-Cartel Nexus, Texas Public Policy Foundation, September 2022 ]. Why is this not a political issue in the U.S.?

Toward the end of 2006, Mexico’s President Felipe Calderón launched a war against the cartels that had been terrorizing the country for some time. He deployed 6,500 army troops to his home state of Michoacán to kick off a massive campaign to neutralize them [Mexican troops begin broad drug sweep, Associated Press, December 12, 2006].

But despite that effort, and those of subsequent presidents Enrique Peña Nieto and Andrés Manuel López Obrador, the cartels are still a strong presence in Mexico.

The Sinaloa and Jalisco Nueva Generación cartels are the titans of drug trafficking. They’ve been fighting for at least a decade to claim the spot as the top dog of organized crime in Mexico. The latter has gained prominence in recent years for its jaw-dropping ability to dish out violence against its rivals [Mexico’s deadliest cartel is dropping bombs from a drone onto rival camps in new turf war, by Imogen Braddick, New York Post, January 12, 2022].

But whichever cartel is in control, one constant has been the Mexican government’s inability to bring these murderous criminals to heel. Then again, several cartels, such as the Gulf Cartel, are made up of former members of the Mexican military and law enforcement, which makes neutralizing the already powerful syndicates even more difficult [Mexico Kills Zetas Founder As Cartel’s Decline Continues, by Michael Lohmuller, Insight Crime, May, 12, 2014].

One of the most embarrassing examples of the Mexican government’s ineptitude: its failure in 2019 to arrest Ovidio Guzmán López, the son of drug kingpin Joaquin “El Chapo” Guzmán Loera, in the state of Sinaloa [Botched mission to capture El Chapo’s son sparked by DC judge, by Emily Saul & Ebony Bowden, New York Post, October 18, 2019]. Cartel gunmen outfought the security forces, which eventually retreated and allowed Guzmán López to evade arrest. DC Comics–level conflicts of this nature are the norm in Mexico.

The cartels routinely outgun security forces, and have carved out narco-statelets across Mexico, knowing full well they won’t face much resistance from the government. The cartels are doing in Mexico what Pablo Escobar did in Colombia until U.S. Delta Force operators helped the Colombian military hunt down and kill him in 1993, just as Delta helped Mexican marines capture El Chapo [JSOC’s Secretive Delta Force Operators on the Ground for El Chapo Capture, by Jack Murphy, SOFREP, January 11, 2016].

So let’s not beat around the bush. Mexico is a failed state.

If you’re wondering why what occurs inside Mexico concerns the United States, here’s the reason: With President Joe Biden’s Great Replacement policy that has neutered U.S. immigration law, it’s inevitable that Mexico’s drug cartels will move even more drugs to the border, and continue infiltrating major cities.

While American law enforcement is vastly more competent than Mexico’s, Defund The Police and similar leftist movements to defang policing, to the extent that they have been successful, are leaving major openings for the cartels.

Consider the Drug Enforcement Administration’s Threat Assessment in 2020, which detailed the cartels’ move across the border and into the American heartland. Sinaloa, Los Rojos Cartel del Golfo, Organización de Beltran-Leyva, and Cartel Jalisco Nueva Generación are ensconced, as you’d expect, all along the border in Arizona, California, New Mexico, and Texas.

But the cartels have also reached into Hawaii, Michigan, and Pennsylvania. In fact, the map that depicts their penetration resembles one from Verizon that shows its nationwide coverage [2020 National Drug Threat Assessment, DEA.gov, March 2021]. 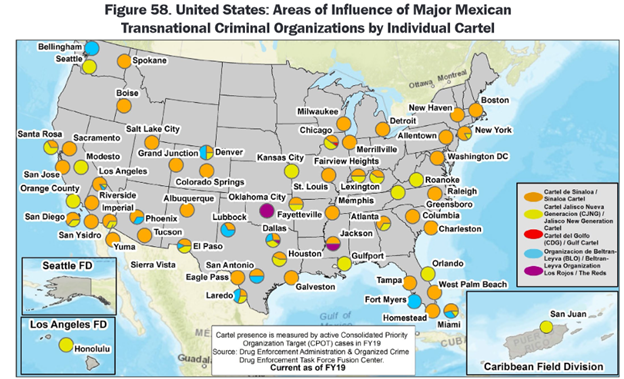 And that cartel presence doesn’t quantify the drugs pouring across the border. So far this fiscal year, that figure is almost 553,000 pounds [Drug Seizure Statistics, CBP.gov]. 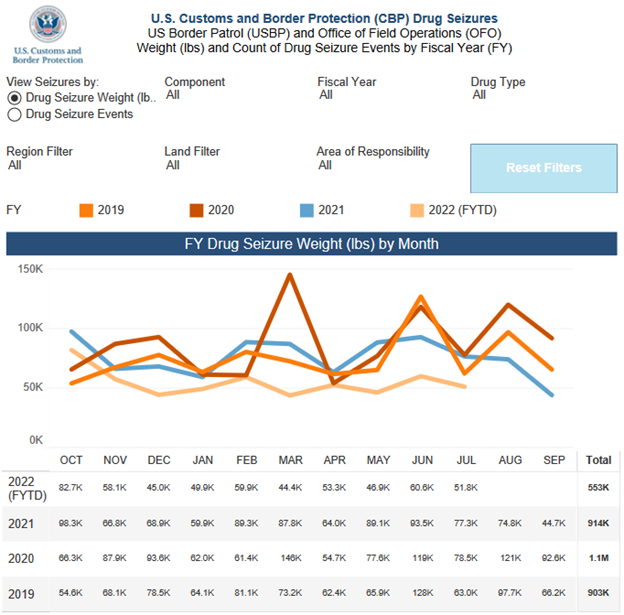 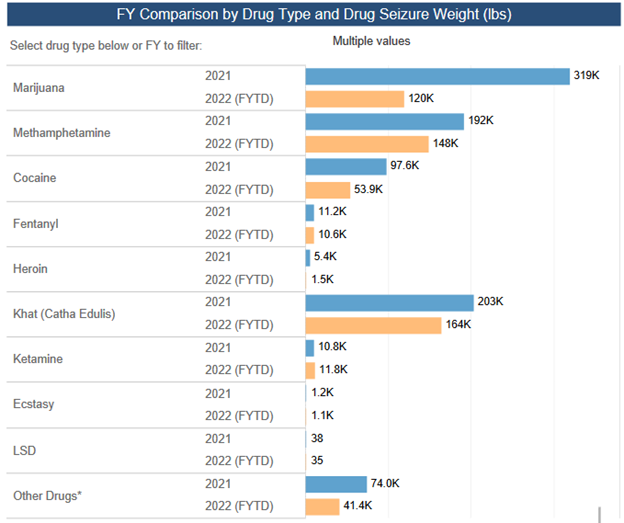 History shows power vacuums are filled. We received a sneak preview of gang-controlled policing during the summer of St. George Floyd. Public order broke down when politicians instructed police to stand down and let rioters, looters, and other common criminals terrorize the public. So ethnic communities in cities such as Chicago turned to gangs like the Latin Kings for security against the Black Lives Matter terrorists who besieged the city.

Do not come into Little Village expecting to loot! The Latin Kings & Gangsta 26 are standing up and protecting their neighborhoods! #LittleVillage #LaVillita #LatinKings #26 https://t.co/5u7wEub7it

The gangs, significantly, kept order and chased out the melanin-enhanced marauders rampaging in the streets [Latin gangs attack Black Chicago protesters in effort to assist police by Blue Telusma, The Grio, June 3, 2022].

But now that cartels have firmly established themselves here, hypothetically speaking, they have the Latin Kings blueprint to follow. If the U.S. authorities continue bringing in and releasing thousands of illegals that they refuse to control, what’s to keep cartels like Jalisco Nueva Generación creeping right in and start claiming police powers on American soil?

Although Mexico appears relatively stable for now, there’s no telling what it could look like in a decade. Mexico’s economy could implode, thus prompting millions of desperate illegals to flood the U.S. in search of work or easy welfare handouts.

With most of the Southwest already colonized by Hispanic illegals, further migration will only accelerate the “Aztlanization” of America. Add in geopolitical intrigue, and you have a very volatile situation. Red China has plenty of assets in the U.S. On top of that, Chinese nationals are working with Mexican drug cartels to smuggle drugs into America [Chinese National Sentenced for Laundering Millions for Mexican Drug Cartels, Justice.gov, September 29, 2020].

For those concerned about China, maybe it’s time to start worrying about what China might do in this hemisphere. As China grows in power and an increasingly Wokified U.S. tries futilely to contain it in East Asia, China might respond in kind by poking the U.S. in the eye in Latin America—namely, Mexico. China could potentially team up with cartels and other criminal actors to amplify the drug traffic heading northward.

Heck, they might just throw a fat wad of cash behind multiple caravans to hasten The Great Replacement.

As the Southwest grows more Hispanic and its denizens identify less with the Historic American Nation, and potentially consider secession or even joining Mexico, China could fund separatist movements. China might even extend diplomatic recognition to a majority-Hispanic Southwest’s political independence.

Far-fetched? In a greatly weakened U.S., experiencing a genuine cultural collapse and lacking competent political leadership, this scenario is all too possible.

It boggles the mind to see U.S. policymakers pound their chests about using U.S. troops to impose “democracy” in countries thousands of miles away—even as they shudder at the prospect of using troops at the southern border to stop an illegal-alien invasion.

Yet this nightmare scenario of the United States losing its southwest territorial integrity is very much a possibility. The country has lobotomized itself through its dogmatic commitment to Diversity-Inclusion-Equity. This enfeebled US will be looted by domestic oligarchs and predatory rivals on the international stage.

Our Ruling Class should think beyond platitudes and empty metrics such as Gross Domestic Product and start defending its historic population from the ghoulish forces of multiculturalism.

The 21st century could be one of reconquest for the Historic American Nation—or one of its subjugation.

The latter fate could be avoided if immigration patriots take power and impose their will on the treasonous rootless cosmopolitans who have bled and browned this great country since the passage of the Hart-Celler Act.

American First immigration patriots must replace it—or it will replace them.

Pedro de Alvarado [Email him] is a Hispanic dissident who is well aware of the realities of race from his experience living throughout Latin America and in the States.