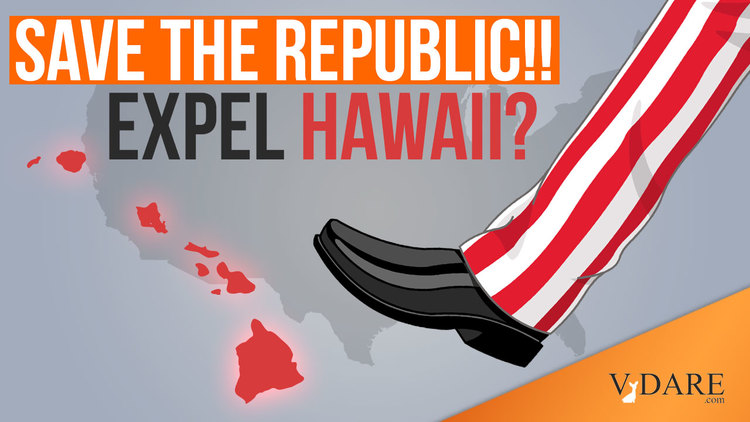 Why Do Only Democrats Get To Have Ideas? Let’s Expel Hawaii!

Democrats want to make Washington, D.C. and Puerto Rico into U.S. states so they can have four more Democrats in the Senate and Puerto Rico’s votes in presidential elections [David Shor’s Unified Theory of American Politics, by Eric Levitz, New York magazine, July 17, 2020]. But why are they the only people allowed to have ideas? The GOP/GAP should counter this move to institutionalize a Democrat majority by, among other things, supporting the Hawaiian independence movement.

Some Native Hawaiians have long thought Hawaii being a U.S. state is a relic of imperialism. They feel the U.S. was wrong to annex the Kingdom of Hawaii in 1898 and make it an American state in 1959. They want their island chain to be an independent country [Aloha to the US: Is Hawai'i an occupied nation?, by Taylor Kate Brown, BBC News Magazine, November 2, 2015].

It's unclear exactly how many Hawaiians support this idea. A poll on the Honolulu Star-Advertiser's website in June 2014 showed that just six percent of respondents in total wanted independence from the United States [Star-Advertiser Poll Indicates a Lack of Enthusiasm for a Native Hawaiian Nation, by Malia Hill, Grassroots Institute, June, 3, 2014]. (Native Hawaiians and other Pacific Islanders are about 9.9% of the population [State Population By Race, Ethnicity Data, Governing.com].

However, support for these ideas can grow over time—witness Scotland. And, anyway, Americans as a whole should have the deciding voice (as they should over statehood for Puerto Rico). It wasn’t clear that there was majority support for independence in Singapore in 1965 or Slovakia in 1993. But the host countries, Malaysia and Czechoslovakia respectively, just expelled them anyway, because they thought it was in their own interests.

Expelling Hawaii could help an American immigration patriot get into power in the U.S. while allowing Hawaiians to build themselves the multicultural progressive utopia they profess to desire.

Hawaii has only twice voted for the GOP candidate in a Presidential election, Nixon in 1972 and Reagan in 1984. It was somewhat competitive in 2004, when George W. Bush lost the state by less than 10 percent. However, four years later with the Hawaiian-born Barack Obama on the ballot against neocon John McCain, it was not close. Obama got more than 70 percent of the vote. Every presidential election in Hawaii since then has been a blowout too with the Democratic candidate receiving more than 60 percent of the vote [Hawaii, 270 To Win]. It is now a safe blue state.

That really should not surprise anyone. Hawaii is an outlier in the United States. Geographically, it's nowhere near the other 49 states. It's the only one that is not a part of North America.

And in addition to having a different history, culture, political composition, and economy than the rest of the country, the composition of people is much different. Hawaii is by far the least white state in the country. Just 21.8 percent of their population is non-Hispanic white. It is also one of the least black states in the country, at 1.6 percent. A plurality of its population is Asian (37.3 percent) while 9.9 percent is Native Hawaiian or other Pacific Islander.

In contrast, overall the United States is about 60.6 percent Non-Hispanic white—rapidly declining thanks to Washington’s Elect-A-New-People immigration policy, as VDARE.com has pointed out for more than 20 years.

Conservatism Inc. would have you believe that if we just talk about Affirmative action enough and how it’s not fair in college admissions, then all of these people will vote for the right. However, their candidates can’t win over even these voters, so that strategy is ineffective.

For American patriots, supporting Hawaii leaving the Union is an easy call. It’s a nice vacation spot and even a key military outpost, but that’s not a reason why it needs to be a part of the United States. The United States maintains friendly relations with other countries that allow Americans to vacation there, and it notoriously has military bases all over the world. Moreover, a small island nation would have no problem with receiving military protection anyway.

The upside of expelling Hawaii is not massive, but it’s not nothing either. The U.S. is not a one-man, one-vote unitary state: it’s a Republic, with federal institutions carefully crafted to prevent heavily populated sections from oppressing the others. If Hawaii were not a part of the United States, there would be 49 states. That means there would be 98 Senators and two fewer safe seats for the Democratic Party. Additionally, the Democratic Party would lose two safe Democratic U.S. House seats and up to four electoral college votes.

The Reapportionment Act of 1929 determined that there will always be 435 U.S. House seats, so those seats would end up going somewhere else. There would be a chance that one or both end up in patriot hands, which is better than the current situation where none are.

The same goes for the state’s four electoral votes. None of those votes go to immigration patriots. Even if only one red state gained an electoral vote as a result of Hawaii’s expulsion, that’s still an improvement.

Of course, independence would mean that we would lose Hawaii’s Senators—currently Brian Schatz, whose ethnic animus is so intense that he flipped out when Trump Attorney Jeff General Sessions mentioned the U.S.  “Anglo-American heritage of law enforcement,” and Mazie Hirono, a Japanese immigrant who claimed that Supreme Court nominee Brett Kavanaugh was not entitled to the presumption of innocence (obviously one of those alien Anglo-American concepts) and who more recently announced she would vote against all white male Biden nominees (unless they were homosexual).

But will we miss them?

So other than the feeling that they corrected some historical wrong, what do Hawaiians get in return for this?

A lot. As an independent country, Hawaii would have far more control over social issues and spending. They could establish a progressive society without conservatives infringing upon them. Name a Leftist economic or social policy and they could have it: single-payer healthcare, free public college, unrestricted and taxpayer-funded abortion, strict gun control, Affirmative Action for Native Hawaiians, unlimited work visas, Open Borders, and so on. If they want all of that, they can have all of that. It would be their country and the conservative a.k.a. white minority would not have the power to stop them. That’s not to say universal healthcare and affordable higher education are bad or good ideas, but rather that Hawaii’s path to achieving those things is easier if the state collected what is now federal tax revenue in addition to state tax revenue.

The Hawaiian state legislature has 24 Democrats and one Republican in the Senate and 47 Democrats and four Republicans in the House of Representatives [Hawaii Legislature: GOP Loses A House Seat, Stays Even In The Senate, by Kevin Dayton, Honolulu Civil Beat, November, 3, 2020]. If they had a national government with that composition, they could get a lot of their priorities done quickly.

I suggest the best way to go about it would be for Hawaii to first hold a referendum on the matter with one catch: only Native Hawaiians could vote on the matter. It was their country before the United States annexed them. Plus, Native Hawaiians are generally the demographic who want independence, so that would make this proposition more attainable.

If some rich white liberal who works remotely from Hawaii wants the state to stay as a part of the United States, that’s too bad. But he could still stay there even if they establish a new country.

One additional upside to this, if Native Hawaiians are successful in their pursuit, is that it would show the current composition of the United States is not permanent. If other states or territories want to leave, there could be a playbook there for them in the future. How about my native New England?