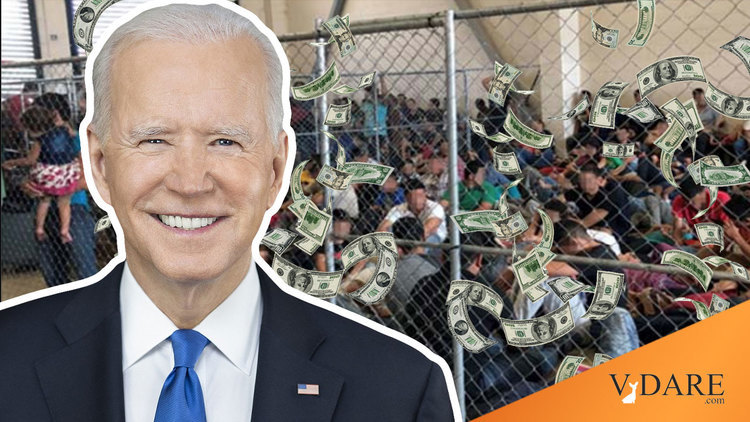 One of the wonderful things about Christmas and the Holidays is getting together with relatives who do not share your political views. It exposes you to different viewpoints and lets you know just how deluded some of your relatives are.

So, a few mornings ago on December 23rd, I went to breakfast and found a copy of the Washington Post sitting at the kitchen table where I normally sit. The lead article was titled "Separated at the U.S.-Mexico border by Trump, a mother and daughter work to reconnect." Unsurprisingly in Jeff Bezos's Washington Post, it's an open borders propaganda piece. It relies on one person's hard luck story to make its point.

They were among the first families separated at the border by Trump and -- four years later -- the first reunified by Biden. Our story on the long road to rebuilding the relationships severed by the zero tolerance policy. https://t.co/GmiTOTqc5U

According to the Washington Post’s Kevin Sieff, poor Maria Chic Reynoso had no choice but to come to the United States illegally with her daughter back in July of 2017. She managed to pay $10,000 to a smuggler and was travelling with her sister and her sister's one-year-old too. She was going to claim political asylum. Of course, she was caught, separated from her child who was sent to Florida to stay with her sister Patricia. Patricia was most likely released because her daughter was a one-year-old.

Now, the whole reason for refugees being allowed into other countries all stems from U.N. treaties made in the wake of World War II. It was plainly made with groups like Jews or gypsies suffering a holocaust in mind.

If poor little Maria was truly fleeing Guatemala in fear for her life, don't you think that would be one of the first things mentioned in the article? However, there is no mention for why she absolutely could not stay in Guatemala and was forced to flee. I speculate the reason for her fleeing Guatemala is not mentioned because her lawyers will be working on her phony baloney story to keep her in the U.S. They haven't got the details (lies) together yet. Not that she need worry, the Biden Administration has so handicapped ICE that virtually no one is getting deported.

I recall talking with a conservative uncle about college papers. He was frustrated because he had been advising his son on how to write a paper and he told his son to write down something like "In my opinion,..." and then proceed with his argument. The professor grading the paper disagreed and told the son to leave out the opinion part and essentially to present his opinion as settled fact.

When you realize that "journalists" at the Washington Post present their opinions as fact, then you get a different perspective. The Post article does give the name of a lawyer representing Maria, Carole Ann Donohoe. A bit of research on Ms. Donohoe [Tweet her] shows she works for an organization calling itself "Al Otro Lado" (the other side). Going from their website, the second person listed is named Aldo Martinez. His brief biography says that while attending Berkeley, he was a member of M.E.Ch.A., Movimiento Estudiantil Chicano de Aztlán; "Chicano Student Movement of Aztlán." Aztlan is the idea that the southwestern United States belongs to Mexico.

In this article, they show Ms. Donohoe as a heroine valiantly defending the poor and oppressed Maria. There is no mention that the whole reason the journalist found out about Maria was by getting in touch with a far, far leftist organization with members who wish to remake the southwestern part of the United States as a separate country. Again, there is no reason given for why Maria needed to flee Guatemala in the first place.

They do get in front of Maria's boyfriend working illegally off the books. The poor dear, how else are they to survive? Certainly not by returning to their native country. How cruel are you to even think so!

Unfortunately, over the years of working for the Border Patrol, I encountered quite a few legal aliens, visa holders and illegal aliens working at construction sites. The vast majority were being paid off the books by a subcontractor. This gave the main contractor plausible deniability. As long as the alien was not a full-up illegal alien, we never did anything about the ones working off the books. The one time I encountered a member of the Department of Labor, he was completely uninterested in how aliens were being paid (he also spoke Chinese way better than English). I even encountered illegal aliens coming from worksites who had court dates far in the future and was told that I couldn't touch them since they were in "proceedings." I was told that ICE could do something about the illegal hiring practice, but I never saw it then, and now that Biden is in office, you can forget any kind of enforcement on that.

The left in general loves these individual hard luck stories. It's how they get an open border. The right loves the individuals' stories too, from the opposite perspective, but the right wing papers are not seen by nearly as many Americans. The director of A Christmas Story was killed by an illegal alien drunk driver. Was that on the front page of the Washington Post? It was not and will never be. Regular Americans are not worthy of having their individual stories told. The historic American nation sits on the Magic Dirt that the rest of the world wants. Obviously, no one descended from historic Americans is worthy of the Magic Dirt that was left behind for them.

Incidentally, I advise not subscribing to the Washington Post since it is so far left. You would be giving money and publicity to a propaganda outfit and it's not like the Post will go bankrupt with Bezos bankrolling it.