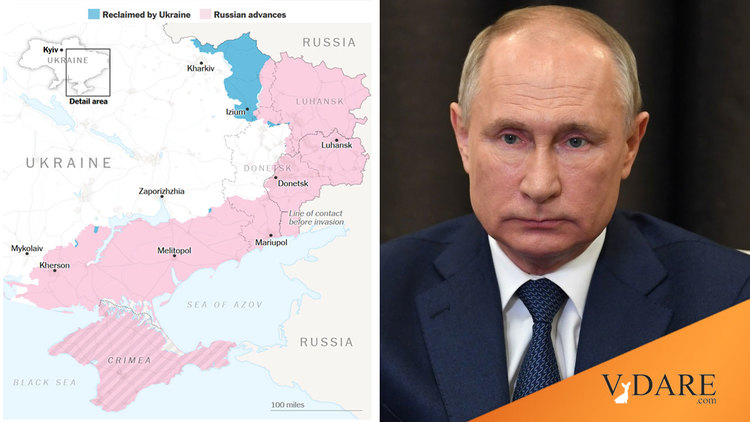 In the last week, the Russian army in the Kharkiv region of Ukraine was driven out of some 2,200 square miles of territory, according to the Ukrainians, whose soldiers are now two miles from the Russian border.

The Kharkiv battle was a rout for the surprised Russians, who tore off their uniforms, threw down their weapons and fled, some on stolen bicycles. For Russia, it was the worst defeat of the war.

That Moscow sustained a stunning setback is attested to by the news that Russian nationalists back home have begun to grumble openly about Putin’s management of the war he launched on February 24.

Where does Putin stand now?

He is in the seventh month of a war he launched last winter, and he appears to be headed into this coming winter with no victory and no end to the war in sight.

His early offensives, while successful north of Crimea and in the Donbas, failed to capture Kiev, Kharkiv or Odessa on the Black Sea, Ukraine’s three largest cities, which were Russia’s strategic objectives.

Putin’s gains in the Donbas are the one great prize he has. But his army is now demoralized and on the defensive. The momentum of the war has shifted in Kiev’s favor.

Western and, in particular, the U.S. weapons Ukraine is being provided, have proven devastating to the Russian forces, whose losses in tanks, armor and troops are major.

Thousands of Russian soldiers have been killed, wounded or captured. Putin has no available reserves in Russia without imposing conscription to replace them.

The Ukrainians now appear to be guaranteed an endless supply of the modern U.S. weapons they have used to decimate the Russian army.

The present prospect for Putin is thus no victory, no end to the war, no end to the weekly casualty lists of dead, wounded and missing, a continued stalemate now, and the prospect of eventual defeat ahead.

Could Putin survive perceived defeat in a war he launched, and the personal, political and national humiliation he and Russia would sustain from such a defeat? Would Putin be able to survive that and remain president of Russia after 22 years in power?

In short, in a war history will call Putin’s War, the tide is turning against the Russians, and Putin faces the prospect of having been the ruler who launched Russia’s least necessary and lost war.

What are Putin’s options?

The first is to stay the course, cut off oil and gas exports to NATO Europe, and hope Ukraine’s losses and Europe’s hardships this winter compel Kiev and its allies to accept a truce that allows Russia to retain some of the new territory it has gained since February 24.

The problem with this course of action is that it is Ukraine’s army that appears to have time on its side now and the wind at its back.

The alternative to a war that lasts as long as the Ukrainians are willing to fight to drive the Russians out is for Russia to escalate and win, and force an end to the fighting.

How could Moscow do this?

First, Putin could raise the stakes, say we are at war with NATO, call up Russian’s army reserves, as in World War II, and conscript enough new soldiers to replace those already lost.

Second, there is the Grozny option, the devastating artillery, air and rocket assault the Russians visited upon the Chechen capital to bring an end to a separatist moment in 2000.

But would the Russians, before the eyes of the world, do to Kiev or Kharkiv what they did to Grozny a quarter century ago?

Beyond the Grozny option, there is the nuclear option.

Russia has thousands of tactical atomic weapons, the largest such arsenal in the world, and the threat to use, or the actual use of one or more of these weapons, would raise the stakes in the war exponentially.

Early in this war, Russia’s hawks talked openly of the possible use of tactical nuclear weapons. That talk has begun anew.

The basic question comes down to this:

Would Putin threaten or use nuclear weapons to prevent a defeat and humiliation for himself and Russia? And, if so, how and where would he use them? And how would Kiev and the West respond?

America, Britain and France are all three both NATO and nuclear-weapons states. But none has a vital interest in the outcome of this Ukraine war to justify a nuclear war with Russia, even if Russia resorts to first use of such a weapon.

The longer this war goes on, and the sooner the Russian bleeding becomes intolerable to Putin, the more likely it is that he will escalate, rather than capitulate and accept defeat and humiliation for his country and himself, leading to his removal from power.

Again, a desperate Putin is a dangerous Putin.