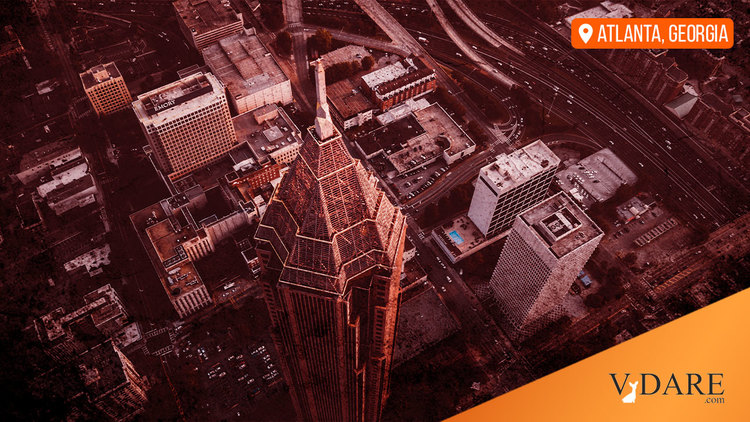 One of the main themes of Tom Wolfe’s late 1990s novel A Man in Full is that black and white elites in Atlanta have more or less worked out an intelligent deal that allows blacks to rule the city without killing the white corporate goose that lays the golden eggs. Being a Wolfe book, the many comic ironies of the situations are emphasized, but the underlying message is fairly upbeat. (Whether the Atlanta System, which depends upon Atlanta’s sizable middle class black population and excellent transportation links to lure frequent flyer corporate managers, is exportable to other American cities is not something A Man in Full worries about.)

But all good things must come to an end, and the Racial Reckoning, especially after the ridiculous Rayshard Brooks riots, is endangering Atlanta’s long modus vivendi.

(Keep in mind that while the Atlanta metro area is huge, the municipality itself is only a half million people, half black and 3/8ths white.)

Atlanta’s Crime Wave Makes Some Residents Look to the Suburbs

Buckhead group explores seceding from the city amid rise in violent crime; ‘Everybody is on edge’

ATLANTA—Lauren LeNoir had always felt safe on her quiet street in Buckhead, the city’s wealthiest neighborhood, known for its upscale malls and mansions. But that all changed when she was coming home from work one night in January.

The 43-year-old restaurant general manager pulled into her driveway. In an instant, she said, two men were at her car door. One man threw her to the ground, pressed a gun to her head and threatened to blow her head off. In the end, they took off with her purse and cellphone.

“He had no regard for my life,” she said. “They’ve stolen something that I cannot get back, and that is my sense of security.”

Violent crime has been on the rise in many parts of Atlanta since last summer, not just Buckhead. From Jan. 1 to Feb. 20, there were 18 homicides in Atlanta, up 80% compared with the same period last year, according to the Atlanta Police Department. Shooting incidents were up 32% for the same period; robberies, 17%; and aggravated assaults, 47%.