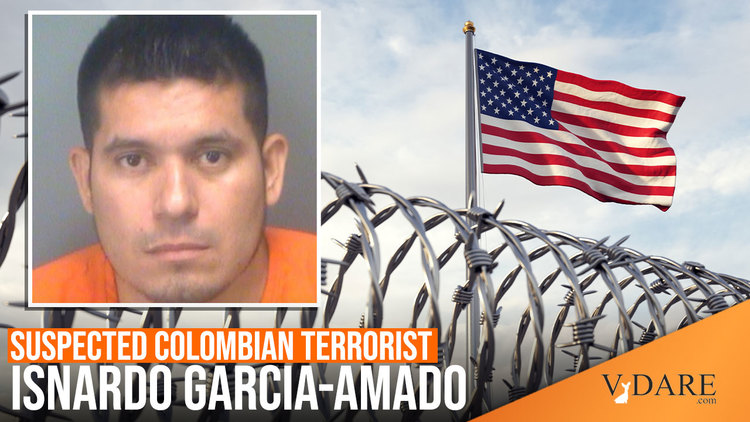 The president, his party, and the leftist Mainstream Media shriek that “white supremacy” presents the greatest terror threat to the United States. This alleged threat animates the Left’s push for more tech censorship, hate speech laws, gun control, and expanded state power to go after ordinary white Americans. But the real terror threat is not from the historic American nation—it’s from the Treason Lobby’s disastrous immigration policies. Terrorists can swarm over the southern border without impediment. Generous refugee policies and chain migration allow extremists to enter the country legally. The actual danger remains the same as it always was—Islamic terrorism. The focus on “white supremacy” is just a political tactic for the Left to go after its domestic enemies.

President Joe Biden made this clear after the Buffalo shooting. He denounced “white supremacy” as terrorism. “White supremacy is a poison. It’s a poison—it really is—running through our body politic," Biden said in a speech delivered in Buffalo. “We need to say as clearly and forcefully as we can that the ideology of white supremacy has no place in America. None” [In Buffalo, Biden condemns 'poison' of U.S. white supremacy, by Jeff Mason, Reuters, May 18, 2022]. His political allies quickly went to work to blame the shooting on the widespread belief in the Great Replacement and to demand Big Tech do more to censor this idea. New York Gov. Kathy Hochul proposed a new state police agency to monitor Wrongthink on the internet. Whether this new task force will have the power to punish Wrongthink is unclear.

The House passed a bill to go after domestic terrorism the week after the shooting. It was a party line vote; just one Republican, Never Trumper Adam Kinzinger of Illinois, voted for it. The bill creates new agencies within the departments of Justice and Homeland Security to target “domestic terrorism.” Most Republicans understand Leftist bureaucrats will misuse their new powers to target and terrorize conservatives in general, and Trump supporters and immigration patriots in particular. They observed that DOJ entertained notions that parents who protested Critical Race Theory at school board meetings were possible domestic terrorists. The bill won’t go anywhere in the Senate, but its swift passage after the shooting indicates that Democrats are committed to propagating the myth of white supremacist terror [Days after Buffalo mass shooting, the House approves a bill to fight domestic terror, by Deidre Walsh, NPR, May 18, 2022].

Apropos of the Buffalo shooting, Leftists insist that the average mass shooter is a deranged white male, sometimes inspired by right-wing extremism. The stereotype’s purpose is to position the white male, not the jihadi, black gangster, or Antifa extremist, as the most dangerous threat to the country. Like all Leftist myths, this one is a fantasy. Judging by a broad standard of what constitutes a mass shooting—one that ends in mass casualties—whites are far from the majority of perpetrators. While recent data are scant (likely intentional), the New York Times found in 2016 that at least 75 percent of known mass shooters were black. That’s quite the contrast from the media stereotype [A Drumbeat of Multiple Shootings, but America Isn’t Listening, by Sharon LaFraniere et al., New York Times, May 22, 2016].

A narrower definition of mass shootings, to exclude criminal activity (such as robberies, drive-by shootings, etc.) and other factors, still yields a result counter to the Left’s narrative. Whites are a majority of shooters under this definition, but not disproportionately to their share of the population. Meanwhile, Middle Easterners are only 0.4 percent of the American population, yet 9 percent of mass public shooters. Blacks, Asians and Amerindians are also overrepresented in this category. "White supremacy" is only a factor in 9 percent of these violent acts [Data Shows White Supremacists Are Not The Most Likely Mass Murderers, by John R. Lott, The Federalist, May 23, 2022].

The data are clear: Whites are not the real domestic threat.

Yet while the Biden Regime focuses on the phantom menace of white supremacist terror, actual terrorists sneak into our country. Just a week ago, Immigration and Customs Enforcement arrested a suspect on the terror watch list who sauntered across the southern border. The Border Patrol detained Colombian Isnardo Garcia-Amado when he illegally entered in April. But he was released and allowed to roam free, despite being flagged for his inclusion on the terror watch list. ICE didn’t pick him up until weeks after his first encounter with American law enforcement. Garcia-Amado was another beneficiary of Biden’s catch-and-release policies [ICE nabs suspected terrorist weeks after Border Patrol release, by Callie Patteson, New York Post, May 24, 2022].

Since Day 1, @SecMayorkas has refused to enforce our immigration laws and now there are suspected terrorists being released into our country. Mayorkas is a national security threat to our nation and must be impeached. #ImpeachMayorkas https://t.co/L0EIL66BPK

Unfortunately, cases like this abound. Border agents have apprehended 158 illegals on the terror watch list so far this fiscal year. This number, of course, includes only those caught. It might not include those who, like Garcia-Amado, were detained but released due to bureaucratic incompetence. FBI director Christopher Wray admitted that this is a serious problem in a congressional hearing last month [FBI chief says CBP facing 'heck of a challenge' with national security threats at southern border, by Adam Shaw, Fox News, May 25, 2022].

The terror threat also comes from legal immigrants, particularly refugee resettlement. The recent horde of Afghan refugees the Biden Regime imported are a particular menace. The Pentagon has identified at least 50 Afghans as potential security threats. And that’s just the ones they detected. Many more could be hiding. And who knows how many Afghan kids will grow up to be terrorists [U.S. May Have Allowed ‘Known or Suspected Terrorists’ to Go Undetected Among Resettled Afghan Evacuees, by Brandi Vincent, NextGov, February 22, 2022]?

We have plenty of examples, by the way, from the Somali community in Minneapolis, the American center for ISIS recruitment in the 2010s. At least 45 Somalis traveled to Syria to join the terror group, and dozens more were arrested before they could reach their destination [How Minneapolis’ Somali community became the terrorist recruitment capital of the US, by Hollie McKay, Fox News, February 16, 2019].

One example of children who grow up to be terrorists is Omar Mateen, the infamous Pulse Nightclub shooter. Mateen’s father was an Afghan refugee who came over to the U.S. in the 1980s. Another example was the Tsarnaev brothers, the Chechens responsible for the 2013 Boston bombing. Their father brought the family here on a tourist visa and claimed asylum. Our generosity was rewarded with bombs.

Along with refugees, we must worry about chain migration and the diversity visa. America witnessed two terror attacks in 2017 committed by foreigners who shouldn’t have been here. Uzbek Sayfullo Saipov killed eight New Yorkers in a jihadi car attack in October of 2017. He came here through the diversity visa lottery in 2010. Bangladeshi Akayed Ullah bombed a New York City subway just two months later in the name of Allah. Ullah landed here thanks to chain migration, which imports the relatives of immigrants. Both terror attacks are barely remembered because the Unite the Right Charlottesville rally that took place that same year far overshadows them. The media think it’s a much bigger danger for “white nationalists” to march than it is for jihadis to kill Americans.

Thus, the media fixate on “white supremacy,” which offers more tools to go after their political enemies: the Historic American Nation. Persuading the Americans that whites are the real problem allows the Left to push for more censorship, more egregious laws that target whites, and more power for Leftist totalitarian bureaucrats. Focusing on the terror threat posed by foreigners runs counter to their agenda. Leftists don’t want to shut the borders or make it harder for people to come here legally. They want the borders open and immigration made even easier to push forward The Great Replacement. So they ignore the real problem to focus on the imaginary threat.

Republicans shouldn’t fall for it. The best way to make America safer is not through a domestic terror bill, hate speech laws, gun control, or anything else like them. America will be safer when we seal our borders and pass patriotic immigration reform. President Trump called for the abolishment of the Diversity Visa Lottery and Chain Migration in response to those 2017 attacks. That idea must be championed again.

America does have terror problem. But it’s not from whites, the people who built this country, pay most of the taxes, and are upset about its decline. It’s from foreigners who exploit American generosity, incompetence, and in the case of the Biden Regime, border treason.