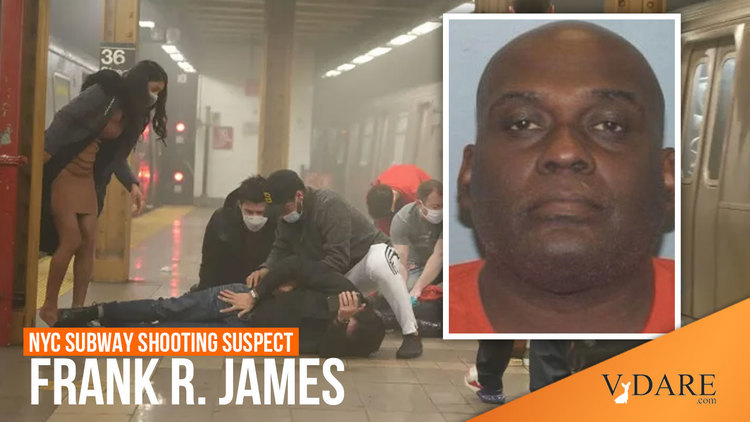 When Americans think of a mass shooter, a familiar profile comes to mind. He’s an angry young white man, involved with the Alt Right and its “extremist views” and possibly an Incel. Consider this headline and subhead from Leftist MSNBC: Denver’s mass shooter was tragically predictable: white, male, and misogynist: Lyndon McLeod’s reported trifecta of white supremacy, male supremacy and the fetishization of gun violence are exhausting in their predictability [by Emma Gray, MSNBC, January 5, 2022]. But this stereotype is simply wrong.

[VDARE.COM note: This corrects an error introduced in the editing process—Hispanics commit more mass shootings than whites, but are not "close behind" blacks.]

In other words, the Leftist MSM is openly and brazenly lying to justify the repression of “political extremists” and “white supremacists,” and ultimately, Trump supporters.

Here is an outfit called the The Violence Project:

[M]en vastly outnumber women as mass shooters, those perpetrators are often a model for the next male shooters, who “see themselves in them,” said Jillian Peterson, a forensic psychologist and professor of criminology and criminal justice at Hamline University. This phenomenon is particularly true among young, white men. Violence Project data show that white men are disproportionately responsible for mass shootings more than any other group [Emphasis added].

This is a lie. At this writing, a review of 2022’s 143 mass shootings at the Gun Violence Archive proves that whites were only responsible for four, or about 2.8 percent of them [Mass Shootings In 2022]. As with previous years, the data show, again, that black men are wildly overrepresented as mass shooting suspects, with Mexican and Central American suspects making up the rest. (Of course, the Regime MSM never ask about the immigration status of those Hispanics.)

Whites are far more likely to be victims in a mass shootings than perpetrators—just as we saw with last week’s subway shooting in New York, or the Greyhound bus shooting in Sacramento [Pregnant Woman Injured In Oroville Bus Shooting ‘Doing Really Good’ Says Ex-Husband, CBS13, February 5, 2022].

Good thing is, shootings like that on the subway are awakening Americans to the truth that blacks perpetrate most mass shootings. And whites in particular are awakening to another unspoken truth: blacks often explode in shooting rampages because they are angry, anti-white racists, mostly likely because of the steady stream of hate-whitey propaganda from the Leftist MSM and anti-white politicians.

The social media rants of the 62-year-old suspect reveal a man consumed with hatred of white people and convinced of a looming race war.

“O black Jesus, please kill all the whiteys,” was one meme he posted.

He’s not too complimentary about Hispanics, Asians and his own race, for that matter, and claims to have had long-term mental health problems. The 29 victims of Tuesday’s shooting were a multicultural mix, as you would expect in a crowded rush-hour subway train. Police say James detonated a smoke grenade before firing 33 shots on the Manhattan-bound N train. Police found a hatchet, three ammunition magazines, fireworks and gasoline. It’s a miracle no one was killed.

As with the suspects in the Airbnb shooting in Pittsburgh and the massacre in Sacramento, California, which killed six and wounded 12, most of the black suspects had lengthy criminal records. So the criminal justice “reforms” that release violent black men from prison might explain the sudden rise in mass shootings from 2019 (95 attacks by April) to the present [Exclusive: Sacramento mass shooting suspect had parole rejected because of violence in prison, by Sam Stanton, Sacramento Bee, April 15, 2022].

Mass shootings almost doubled from 336 in 2018 to a whopping 693 in 2021, even as overall legal gun ownership fell slightly [Percentage of households in the United States owning one or more firearms from 1972 to 2021, Statista.com].

And comparing rates during the same time frame shows that 2022 is set to match or exceed 2021’s mass shooting record.

And naturally enough, despite the obvious, the politicized and now openly anti-white FBI is uninterested in even acknowledging, let alone confronting, the common denominator in mass shootings.

Last month, the FBI shockingly announced that it would not release quarterly crime statistics for 2021—because local police departments had not provided data:

The WRAL Data Trackers and criminal justice journalists all over the country were expecting to see crime data from the first quarter of 2021 this week. The information is collected by the FBI and used to identify trends. However, the bureau said they won’t be releasing any quarterly stats from 2021 because not enough police departments disclosed the information.

As of last year, the quarterly nationwide Uniform Crime Report data comes from the National Incident-Based Reporting System (NIBRS.) While the FBI notes that submitting the information is voluntary, no one [is] holding police department[s] accountable to turn it over even though, as in this case, the lack of data reporting affects a nationwide analysis.

Yet in June, explaining the bureau’s demand for $10.2 billion in funding, FBI Director Christopher Wray justified the expense by claiming the agency needed the money to combat “hate crimes” and “domestic violent extremism.”

Meanwhile, FBI gumshoes and undercover operatives wasted time and money on the time-consuming and disastrous Gretchen Whitmer kidnapping hoax, which exposed the FBI’s role as provocateur [The Feds Are So Desperate For Violent ‘White Supremacy,’ They’re Fabricating It, by Madeline Osburn, The Federalist, April 12, 2022].

This year, the FBI’s “domestic terror” wing has allocated $101.2 million for “domestic terror,” most of it earmarked for investigating “White Supremacists” and “Militia Extremists.”

At the same time, the 2022 budget overview of the FBI’s plan for countering minority gun crime prioritizes “promoting criminal and juvenile system reform” that emphasizes “alternatives to incarceration” and “addressing hate crimes.”

In other words, the Feds will do nothing to address black mass shootings, and instead go on a snipe hunt for “white supremacists”––which we all know is code for anyone who doesn’t think too much of the Leftist Deep State and its infernal MSM Information Ministry.

So bad policy and bad ideology, backed by bogus data, will ensure the problem gets worse.

But by chasing down mostly imaginary “White Supremacists” and concocting crazy kidnapping hoaxes, the FBI is making the country a lot less safe.