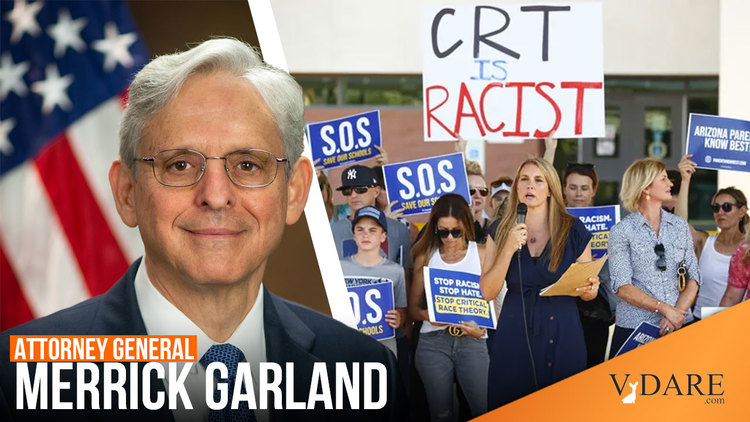 Earlier by Jared Taylor: The Coming Purge—Are We All "Domestic Terrorists" Now?

For those of us paying attention, you call this a white pill.

For those of us just starting to pay attention, you call this a red pill.

Because the latest actions of Attorney General Merrick Garland are nothing more than an admission the anti-white teachings of Critical Race Theory represent the new state religion (governing both private and public institutions), and anyone who dares oppose this new gospel is a heretic.

On Monday, Attorney General Merrick Garland directed federal authorities, including the Federal Bureau of Investigation (FB), to crack down on parents who protest against school boards over far-left indoctrination in their curricula, according to Politico.

In a written memorandum by Garland sent to FBI agents and FBI Director Christopher Wray, Garland said that his Department of Justice (DOJ) will announce further measures in the next few days that will “address the rise in criminal conduct directed toward school personnel,” without citing any evidence of any such “criminal” activities. Among these measures will be a “federal task force” consisting of agents from the DOJ’s “criminal, civil rights, and national security divisions.”

Garland baselessly accused such parents of making “threats against public service,” which he claims “run counter to our nation’s core values. Those who dedicate their time and energy to ensuring that our children receive a proper education in a safe environment deserve to be able to do their work without fear for their safety.”

Garland’s threats come after months of protests against various school boards across the country, as parents have increasingly learned about strict new measures and radical agendas being pushed by schools onto their children. At the heart of these protests, which often take place at public school board meetings and sometimes go viral, are mask and vaccine mandates for children, the promotion of Critical Race Theory, and the inclusion of graphic lessons about sexuality.

Critical Race Theory (CRT) is the far-left and debunked claim that all White people are automatically racist, and that America is a systemically racist nation at its very founding. CRT has been used to try to shame White students and make them feel inferior to their non-White classmates, and also to give non-White students free passes to make racist statements about White people. Many parents, including non-White parents, have spoken out against these lessons as racist, historically false, and only serving the purpose of further dividing Americans.

Lessons about sexuality have stemmed from the radical LGBTQ agenda, which seeks to push homosexuality on young children, as well as the scientifically false notion of “transgenderism,” which claims that there are more than two genders, and that anyone can choose their gender at any time. Most recently, Fairfax County Public Schools in Virginia came under fire for having two such books in its library; both promoted homosexual relationships, with one of them being a graphic novel that included visual depictions of gay sex between children. The books were removed from the district’s libraries following universal backlash from parents.

Nationwide parents are mobilizing to oppose CRT, which teaches young white children in public schools their ancestors were uniquely evil and oppressors of people of color, creating unnecessary feelings of resentment among the growing non-white population who see their white classmates as privileged inheritors of a civilization built on oppression and discrimination against their ancestors.

As news spreads their protests are deemed “domestic terrorism” by the DOJ and FBI, this will be a red-pilling moment for them about the reality of just how pervasive anti-white bigotry is as official state doctrine governing both private and public institutions.

For those of us who have been paying attention, this action represents a decisive move by our federal government in illustrating just how anti-white it has become and how dedicated to the principles of The Great Replacement they are now focused upon ensuring occurs.

Opposition must be deemed dissent.

Remember, Critical Race Theory is nothing more than institutionalizing the state religion: anti-whiteness. The DOJ working with the FBI to target those who oppose the anti-white teachings in school show our own government considers white people "domestic terrorists."