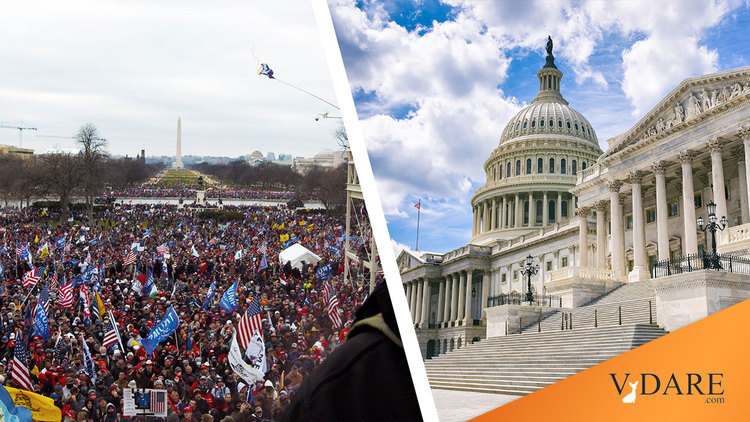 Democrats are struggling to pass cherished legislation by the slimmest margins. So their chief priority now is crushing political opposition. Their weapon: the House January 6 Select Committee. The committee claims it simply wants to investigate the Mostly Peaceful Protest that leftists risibly deem the worst terror attack since 9/11 [Nancy Pelosi likens Capitol attack to 9/11, by John Silk, DW, September 17, 2021]. In fact, it’s a Stalinist witch hunt seeking to defame, pauperize, and even incarcerate its targets. Democrats hope to stymie chances of a GOP resurgence in the 2022 midterms. If the GOP does gain control of the House, its first priority must be disbanding this inquiry and empaneling a new one to investigate a very real insurrection: 2020’s Floyd Hoax riots led by Black Lives Matter and Antifa.

The January 6 committee was created in June after the failure to create a January 6 special commission. Only two Republicans, anti-Trumpers Liz Cheney of Wyoming and Adam Kinzinger of Illinois, voted for it. And they just happen to be the only two Republicans who serve on it. (More recently, Cheney and Kinzinger also voted to censure Paul Gosar over a parody video.) House Minority Leader Kevin McCarthy nominated conservative Trump supporters, but House Speaker Nancy Pelosi and her gang rejected them [Liz Cheney And Adam Kinzinger Blasted Their Party As The Only Republicans On The House Jan. 6 Committee, by Kadia Goba, Buzzfeed, July 27, 2021].

Black Democrat Rep. Bennie Thompson is running the panel. He had already declared the January 6 protests “domestic terrorism” the very next day. He also has already concluded that the protests were a “premeditated attack” [Bennie Thompson says 'there's no question' that the Capitol riot was premeditated, by Taylor Ardrey, Insider, October 24, 2021]. That contradicts the FBI, which has found no evidence that the incursion into the Capitol was planned in advance [FBI finds scant evidence U.S. Capitol attack was coordinated, by Mark Hosenball and Sarah N. Lynch, Reuters, August 20, 2021].

Thompson has long advocated using government power to target his political enemies. In 2019, he demanded the government persecute “white supremacist extremists,” which he dubbed the greatest terror threat to America. He drafted a bill that would require the intelligence community to track so-called domestic extremists online, then present their findings to Congress [We need the full picture on domestic terrorism, by Bennie Thompson, The Hill, September 17, 2019].

Ironically, back in the 1970s, Thompson was an insurrectionist, too:

As a young African-American alderman in a small Mississippi community in 1971, Thompson placed himself on the opposite side, openly sympathizing with a secessionist group known as the Republic of New Africa and participating in a news conference blaming law enforcement for instigating clashes with the group that led to the killings of a police officer and the wounding of an FBI agent.

That’s the guy telling us to worry about the “insurrection.”

The committee’s scope is broad, to say the least. It has subpoenaed more than 45 individuals and groups supposedly tied to January 6. They include White House staffers, the Proud Boys, congressional candidates, and, most notably, former Trump retainer Steve Bannon. Bannon stands indicted for refusing to comply with a committee subpoena. Trump’s White House Chief of Staff, Mark Meadows, will likely be indicted for the same thing [A running list of who has received a subpoena from the House January 6 select committee, by Annie Grayer, CNN, November 29, 2021].

The committee also seeks an unprecedented level of communication records. It has ordered phone companies and social media platforms to collect and retain personal data on hundreds of individuals, including lawmakers [January 6 committee to ask telecommunications companies to preserve phone records of members of Congress who participated in 'Stop the Steal' rally, by Ryan Nobles et al., CNN, August 30, 2021].

The committee did not name names, but trawling for the personal communications of those not accused of a real crime is an outrageous abuse of power. Democrat staffers will, of course, leak embarrassing emails or texts to journalists. That will whip up the usual hysteria. Then they can push those companies to deplatform the WrongThinkers, whom the Democrats have declared “enemies of democracy.”

To his credit, McCarthy said companies that cooperate might be breaking the law, and he has threatened to retaliate if Republicans obtain the majority. That has made the companies a little nervous [Social media and telecom companies vague about their response to January 6 committee, by Ryan Nobles et al., CNN, September 10, 2021]. So far, the committee has only asked them to preserve records. But who knows how far Thompson will go? McCarthy and other lawmakers, for instance, might be subpoenaed. The committee would like nothing better than to indict GOP lawmakers just for questioning Sleepy Joe’s victory last year.

Democrats think they have nothing to worry about because the Mainstream Media Megaphone is cheering this abuse of power. They—the Democrats and their MSM Information Ministry—want pro-Trump Republicans purged from public life on charges of “racism” and “threatening democracy.”

Democrats also hope the committee helps them avoid looming electoral disaster in 2022. The party has nothing else to run on. The economy is in shambles, inflation is through the roof, criminals are running rampant in Democrat-run cities, illegal aliens are streaming across the border by the hundreds of thousands, and America looks pathetically weak to the rest of the world. It also looks in decline relative to China. No wonder Democrats want to paint Republicans as anti-American insurrectionists. They hope that moderate suburbanites concerned about inflation and crime will forget those issues and refuse to vote for the party that launched an “anti-democratic” coup.

So here’s the plan for the GOP if they retake the majority:

One of them, by the way, is Thompson. When the Floyd Hoax riots broke out in 2020, he supported them:

Protesters in Minneapolis and across the country are employing their constitutional right of free speech and the right to assemble. We are witnessing the expected result of African-Americans being brutalized and dehumanized for centuries. The police have historically tortured and murdered African-Americans at a disproportionate rate—usually with no consequence. Riots are destructive, dangerous, and scary—but can lead to serious social reforms.

Thompson also defended Antifa and claimed POTUS 45 could not declare the communist gangs terrorist groups. Thompson also asserted, needless to say without evidence, that “white nationalist” infiltrators might have been responsible for the riot violence.

Many Democrats similarly dote on the rioters who caused upward of $2 billion in damages to cities all over the country [Riots following George Floyd’s death may cost insurance companies up to $2B, by Noah Manskar, New York Post, September 16, 2020]. Some said the violence wasn’t all that bad; it was just a few broken windows [Democrats stay silent on violence in their cities, by Miranda Devine, New York Post, August 19, 2020]. These are the same people who think Trump supporters walking around the Capitol without permission was another 9/11.

Unlike those connected to January 6, very few Floyd Hoax rioters have been punished. Federal, state, and local prosecutors have dropped charges against most, like those who attacked a federal courthouse in Portland [Almost Half of Federal Cases Against Portland Rioters Have Been Dismissed, by Aruna Viswanatha and Sadie Gurman, Wall Street Journal, April 15, 2021]. Meanwhile, the “QAnon Shaman” received a jail sentence of 41 months for peacefully walking around the interior of the U.S. Capitol [‘QAnon Shaman’ is sentenced to over 3 years in prison for role in Capitol riot, NBC News, November 17, 2021].

Americans deserve answers about the 2020 riots and why prosecutors dropped all those  charges. We also need to know whether outside groups aided and abetted them. For example, one possible target: the Bail Project, which helped free numerous rioters, and sent a staffer across the country in a U-Haul to distribute  weapons to demonstrators [Bail Project Tied to Antifa U-Haul Received Millions from Bill Gates, UMG, Jack Dorsey, Among Others, by Jack Hadfield, National File, September 24, 2020].

Why should Trump staffers hand over texts and emails in connection with an event to which they are only remotely connected at best, while a radical Leftist group that passes out weapons to communist mobs doesn’t even receive the equivalent of a speeding ticket? When do Hungarian great anarch George Soros, Microsoft magnate Bill Gates, and Twitter tycoon Jack Dorsey, who funded the Bail Project, get their subpoenas? The GOP must subpoena their texts and emails

The January 6 Committee will roll on as long as Democrats have power. When Republicans regain power, they must pledge to get rid of it and focus on the real domestic terror threat: communist mobs wrecking our cities.

Antifa and Black Lives Matter—and the national Democrat Party—must be put in the dock.