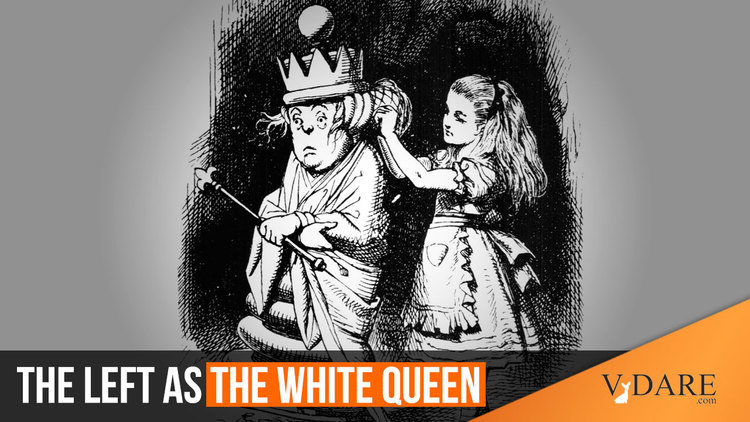 I am often asked how it is that Woke propagandists and politicians can assert that the white proportion of traditionally white countries is declining and that this is an excellent thing and yet simultaneously claim that noting this is happening is a “conspiracy theory” and an outrageous lie. (VDARE.com Editor Peter Brimelow has noted the same phenomenon in the War On Christmas—WOC doesn’t exist and it’s also good that it does because it accommodates growing diversity.)

Sorry crybaby Christians. There's no war on Christmas. Get over it.#WarOnChristmas pic.twitter.com/M8Y7AkYbH9

These views are contradictory; they are impossible. But the Woke can do this very easily; it is the essence of Leftist mind. The great Victorian mathematician and logician Lewis Carroll described the problem in Through the Looking Glass. The naïve Alice finds herself perplexed by the White Queen, who is able to believe contradictory propositions.

Alice laughed: “There's no use trying,” she said; “One can’t believe impossible things.’

“I daresay you haven’t had much practice,” said the Queen. “When I was younger, I always did it for half an hour a day. Why, sometimes I’ve believed as many as six impossible things before breakfast.”

As I explore in depth in my forthcoming book, The Past is a Future Country: The Coming Conservative Demographic Revolution, there are crucial psychological differences between Liberals and Conservatives. Compared to Liberals, Conservatives are high in Agreeableness (and good people tend to be honest), rule-following (rule-followers are generally honest) and low in “Neuroticism.” This term refers to “mental instability” and includes traits such as social anxiety, envy, resentment, and a strong desire to control a seemingly unstable, dangerous and unfair world [see Corrigendum to ‘The nature of the relationship between personality traits and political attitudes,’ by B. Verhulst et al., Personality and Individual Differences, October 2010]. Thus, the kind of people who are extreme Liberals in a broadly Liberal society will have little intrinsic interest in the truth and will force themselves to believe contradictory things if so doing helps them to fit in and control via high status what they see as a dangerous world.

In other words, Liberals are power-hungry, selfish people. They “virtue-signal” about the “marginalized” partly because this gives them influence over Conservatives, who are also concerned about individualizing foundations (though to a lesser extent) and, thus, will cede ground to Liberals. And Liberals also virtue-signal because, being mentally unstable, they tend to have low esteem. This means that they fear the conflict that may result from overt plays for status—of a Donald Trump, power-displaying kind—so they covertly play for status [see The development of human female competition, by J. F. Benenson, Philosophical Transactions of the Royal Society, December 2013].

Thus, ironically, those who wax lyrical the most about “equality,” “kindness” and “the good of the group” are likely to be the least genuinely concerned with it. Doing so is a means of gaining status within the group by appealing to the genuinely group-oriented. These genuinely group-oriented types would simply make sacrifices for the group, without going on about it and drawing attention to themselves.

Consistent with this, where Conservatives identify with those that are relatively genetically close to them—family, kin, class, ethnic group, race—Liberals identify with those who are more genetically distant [Ideological differences in the expanse of the moral circle, by I. Waytz et al., Nature Communications, September 2019]. Bluntly, Liberals are born traitors: programmed to collaborate with outsiders to further their own individual interests.

Not only that, but Liberalism is associated with the Dark Triad traits of Machiavellianism (being power-hungry) and Narcissism (believing one is important and seeking admiration) [see The Dark Triad traits predict authoritarian political correctness and alt-right attitudes, by J. Moss & P. O’Connor, Heliyon, July 2020]. For such people, “truth” is not inherently sacred. There are some things that are much more important than “truth,” such as “power,” “status” and “admiration.”

Contradictions are unproblematic for people who are unconcerned with truth. Indeed, British psychologist Simon Baron-Cohen has argued that we should conceive of a spectrum between what he calls the “extreme male brain” at one end, and the “extreme female brain” at the other, based on data about the ways in which males and females think differently, on average. The extreme female brain is deeply concerned with how people feel and with everyone getting along. It is high in empathy, but it is low in systematizing, being “system-blind.” The extreme male brain, conversely, is primarily concerned with systematizing as well as with competition, hierarchy, and order, and it is low in empathy.

In this sense, Baron-Cohen argues, the extreme male brain is autistic, with autism being characterized by an obsession with systematizing combined with a lack of empathy for feelings of the individual [The extreme male brain theory of autism, by Simon Baron-Cohen, Trends in Cognitive Science, 2002]. So, following Baron-Cohen, we can argue that the left-wing individualist mind is low in systematizing. Other issues are much more important than “facts” and “truth.” In pronounced cases, the individual can indeed happily believe one thing in one set of circumstances and something else in another, if doing so seems to assist that which the individualist regards as important.

So, given this proclivity, Woke attitudes to the “Great Replacement” make perfect sense. A Woke person will state that the white proportion of the population is declining and that this is a positive thing, because this is virtue-signalling their loyalty to and concern for the marginalized and their lack of loyalty to the in-group (and thus lack of “racism”). This gives them Narcissistic supply in the form of admiration and is a means of competitively, though covertly, playing for status via signalling their loyalty to The Current Thing.

However, when Conservative make the same assertion—not even asserting that the process is a deliberate “Great Replacement,” but simply saying that whites will be a minority by a certain date—this is dangerous. The unstable world, about which the Woke person is already paranoid, could become even more unstable. Conservatives might be incited to take power back from the Woke, destroying the system in which the Woke person’s power, status and sense of self is invested. After all, Wokesters have dealt with their insecurities by telling themselves that Liberalism is morally good, and they are the most morally good of all because they are extremely Liberal.

Thus, the Conservative must be stopped from raising these threatening issues. His comments are a “conspiracy theory”—which is increasingly an emotive bludgeon word that means “an uncomfortable but factually accurate revelation that something is occurring.”  They are “dangerous” or “offensive.”

In addition, the Conservative is saying that the “Great Replacement” is a bad thing. He is highlighting unpleasant dimensions and the Woke person knows that the Conservative is right. Thus, he is causing “cognitive dissonance.” He is presenting Wokesters with the fact that they are vulnerable Narcissists who don’t really feel what they claim to feel. He is presenting them with what they are: shallow, deeply insecure, unhappy hypocrites. Thus he needs to be made to shut up and go away.

It is via these psychological processes that Woke people have no problem believing impossible things. Indeed, they have gained power substantially because of those Machiavellian abilities.

That is why post-1965 immigration policy’s unprecedented transformation of the U.S. has been kept out of public debate—until, perhaps, now.