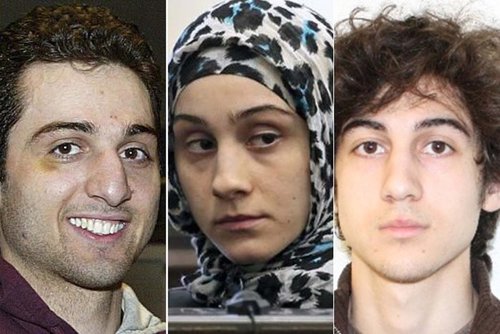 The Sisters Tsarnaev have been nothing but trouble. Double, bubbling trouble. While their Boston Marathon bomber brother Dzhokhar awaits trial this month for the bloody 2012 attacks that killed three and injured hundreds, his elder Chechen immigrant siblings Ailina and Bella remain on the loose in the U.S. after their own frequent run-ins with the law.

Last week, Ailina was arrested in Harlem after allegedly threatening "to blow up her live-in lover's baby mama," as the New York Post reported. Police charged Ailina, 23, with aggravated harassment and released her.

In 2013, she was released without bail in South Boston in connection with a three-year-old counterfeiting case. Prosecutors said she obstructed their investigation. They charged her with willfully lying to police in 2010. She skipped bail in 2011. Upon turning herself in last year after the Boston bombing, she told the court she was indigent, pregnant and a single mother with one other child. The case was dismissed. She has bounced between shelters and shabby apartments shared with sister Bella.

Bella, 25, is a high school dropout and also a single mother. She arrived in the U.S. with jihadi brothers Dzhokhar and Tamerlan and sister Ailina in 2003. The family received a plethora of immigration and welfare benefits. In December 2012, she was arrested and charged with marijuana possession and distribution. Both of her brothers were also tied to illegal drug activity. Now-dead brother Tamerlan (killed in the post-Boston Marathon bombing shootout) was posthumously implicated in a horrific 2011 triple-murder in Waltham, Mass., that authorities believe was drug-related.

The sisters have visited their jihadi cult celebrity sibling Dzhokhar in jail, where he reportedly "joked" about federal restrictions on the visits. The Tsarnaev clan's callous attitude and moocher culture run in the family. Mother Zubeidat, who radicalized eldest son Tamerlan in Islam, fled the country after being charged with shoplifting from a Lord and Taylor department store in Natick, Mass., in June 2011. There is still an outstanding bench warrant for her arrest. She has continued to badmouth America from the comfort of her home in Russia, despite accepting years of tax-subsidized housing vouchers and other entitlements.

At least bitter, rabble-rousing Zubeidat and her husband, Anzor, had the minimal decency to remove themselves from our country. Jobless troublemakers Ailina and Bella seem to have no compunction about continuing to burden America, while offering nothing positive or constructive in return. Their parents exploited our fraud-ridden asylum system, thumbed their noses at the law and passed on a culture of entitlement and criminality to their children.

If our public officials still value America, what are these worthless women still doing on our soil? Entry into this country is a privilege, not a right. Nor should this privilege be irrevocable and interminable.

Oh, and last time I checked, Emma Lazarus' poem did not read: "Give me your grifters, your shoplifters, your bloodthirsty Muslim bombers yearning to abuse freedom in the name of Allah."