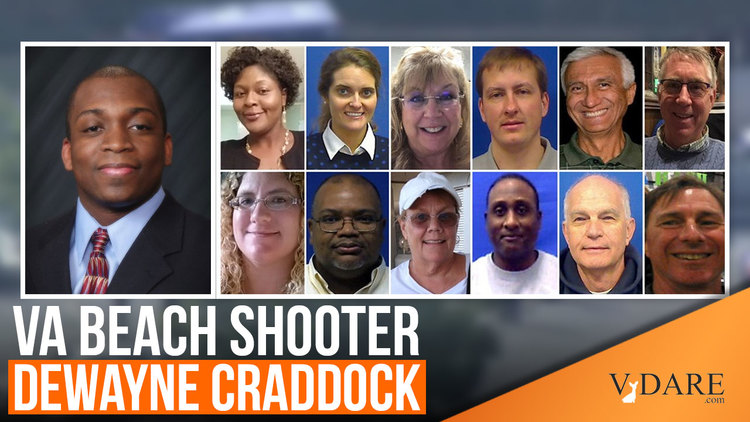 Two years ago in Virginia Beach, a municipal worker resigned from his job and then immediately murdered 12 of his now ex-coworkers and wounded five others before the cops killed him. This case didn’t get all that much publicity from the mainstream media because the shooter was black.

(This case is an exception to Sailer’s Law of Mass Shootings: more killed than wounded is usually the case of a non-black shooter while more wounded than killed implies a black shooter.) Nor did it get all that much play from the dissident media because while the black killer murdered 9 whites he also murdered 3 of his fellow blacks, so the evidence is not overwhelming that he was motivated by anti-white racism.

Obviously, if the shooter had been white and 9 of his 12 fatal victims were black, there would have been hundreds of op-eds in the mainstream media about White Supremacy, just as the Atlanta massage parlor shooter’s body count of 6 Asians and 2 whites drove the prestige press nuts with anti-white hate. But the far right media tends to hold itself to higher standards of evidence than inflammatory clickbait outlets like the New York Times and Washington Post.

After nearly two years spent searching for an explanation of why a city worker entered a government building in Virginia Beach and killed 12 people, officials on Wednesday released a report summarizing what they had learned: nothing. …

But some relatives of the victims rejected that conclusion, arguing that there is sufficient evidence to show Craddock was spurred by long-festering grievances against his co-workers and supervisors. He had struggled on the job and complained of mistreatment, and in the weeks leading up to the shooting, he was dealing with a vendor payment problem in which the city attorney’s office had become involved.

Maybe he embezzled some money and knew he was going to be caught?

“They know the motive. We know the motive,” said Debbie Borato, whose sister Missy Langer was killed. “The shooter, and I’m not forgiving him by any means … somebody there pushed him over the edge.”

… Craddock purchased six guns legally between 2006 and 2019, and he had repeatedly passed firearms-related background checks, according to the Wednesday report. He had last renewed his permit to carry a concealed handgun in 2016.

While they failed to establish a direct cause for the violence, police identified sources of discontent and possible emotional disturbance in Craddock’s life, at home and at work. In 2017, he went through a divorce and was cited for poor job performance. His ex-wife told investigators that he “exhibited signs of paranoia and relayed that he believed others were talking about him,” according to the report.

… In an incident “several years before the shooting,” Craddock, who was Black, had also complained to a supervisor that a co-worker had used “an extremely offensive racial slur” toward him. The supervisor investigated but could not substantiate the allegation, which the co-worker denied, the report states.

This is a pattern I first noticed in the Omar Thornton beer distributor shooting a decade ago in which a black worker murdered eight white co-workers, claiming they were racist, and saw again at the 2020 Molson Brewery case where a black worker murdered four whites and one Mexican: the cops wind up spending a lot of time investigating whether the victims had it coming for being racist toward the shooter.

Nobody in America ever investigates whether our current culture of anti-white hate ever tips some blacks over the edge.