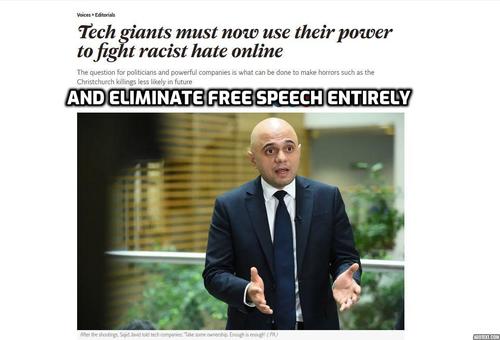 Christchurch Massacre Spurs Tech Totalitarians—But They Have Enemies Trump Could Work With, If He Would Focus

See, earlier: Google vs. Trump: “The Good Censor” On Collision Course With The Patriot President

Needless to say, Journofa/ politicians are demanding more tech censorship following last week’s tragic shooting in Christchurch, New Zealand. The alleged killer, Brenton Tarrant, appears to have been a frequent 8chan user, he livestreamed his attack on Facebook, and his manifesto was quickly disseminated across a variety of platforms. So they must be shut down: "[T]he tech giants have a more profound responsibility than simply trying to censor offensive material after the event. They need to consider how the openness of their platforms allows the spread and reinforcement of racist hatred and violent ideologies,” editorialized the London Independent.  [Tech giants must now use their power to fight racist hate online, The Independent, March 16, 2019]Big Tech censorship, combined with the rise of illiberal Cultural Marxist totalitarianism in the West’s intellectual elites, is the biggest threat to free speech, and immigration patriotism, in America.

It is imperative our politicians resist these calls to silence dissent. Rather than more tech censorship, we need less of it and we need our representatives to challenge Big Tech’s power.

Donald Trump Jr. apparently understands this. [Conservatives face a tough fight as Big Tech's censorship expands, by Donald Trump Jr. , The Hill, March 17, 2019] But his father’s performance in an interview last week left much to be desired.

President Trump said Big Tech colluded with the Democrats against him in the 2016 election and that Republicans face a “tremendous disadvantage” in 2020 due to tech censorship and bias. He also acknowledged that patriots face terrible treatment by Twitter and expressed awareness of the numerous reports on tech censorship. But while Trump said “people are talking about breaking [tech giants] up,” he offered no serious plan of his own: “You fight it by just being good. You got to be really good. It’s much harder for a conservative Republican to win than it is for a liberal Democrat”. [Donald Trump Accuses Tech Giants of Colluding with Democrats, by Alexander Marlow, Matthew Boyle, Amanda House and Charlie Spiering, Breitbart, March 12, 2019]

“Just be good” is asinine and sends a disheartening message to Trump supporters. Big Tech does everything possible to silence conservative and Dissident Right viewpoints, a fact Trump acknowledges. He even knows Big Tech’s behavior affects elections. Yet, he just wants to “be good” in the face of this problem.

It’s not like Trump has no options in tackling tech censorship. Last fall, the administration had an executive order drafted that would have required federal agencies to “investigate/and or prosecute” tech giants for bias and censorship. But the White House backed off the plan, even though Trump had reportedly demanded an order on the matter, after it was leaked to the press. Since then, the White House has shown no signs of drafting a new executive order or legislation to deal with tech censorship.

But where Trump has disappointed, some Democratic presidential candidates show promise—because of their historic suspicion of corporate power. Three 2020 candidates have expressed a desire to challenge Big Tech power and force these corporate giants to better serve the American people.

Sen. Elizabeth Warren garnered much attention this month for her proposal to break up the tech giants:  “Today’s big tech companies have too much power — too much power over our economy, our society, and our democracy. They’ve bulldozed competition, used our private information for profit, and tilted the playing field against everyone else. And in the process, they have hurt small businesses and stifled innovation,” Warren wrote in announcing her proposal. [Here’s how we can break up Big Tech, by Elizabeth Warren, Medium, March 8, 2019]

The Massachusetts senator’s primary focus on tech giants is their disproportionate control of the market and stifling of competition, not their censorship policies. But part of her plan may force Big Tech to better respect free speech. She proposes large tech services be classified as “platform utilities” and divided from one single owner. According to her plan as announced in Medium, “[p]latform utilities would be required to meet a standard of fair, reasonable, and nondiscriminatory dealing with users.”

That “nondiscriminatory dealing with users” part of her plan offers the possibility that Warren would crack down on censorship. Her proposal also empowers “federal regulators, State Attorneys General, or injured private parties” to sue tech giants that violate these rules. That potentially gives the victims of tech censorship the power to right their wrongs in court.

But of course this would be implemented by progressives. And anyone whose attended college know what that can mean.

Similarly, #MeToo’d Senator Al Franken (D.- MN) offered similar criticisms of tech power in  2017 op-ed and urged Congress to do something about it. But Franken also wanted Big Tech to do more to suppress “hate speech” and “misinformation.” State power was to be wielded to break up tech giants and make them more effective censors. [We must not let big tech threaten our security, freedoms and democracy, by Al Franken, The Guardian, November 8, 2017]

Warren herself has not expressed this opinion and she has previously stood up for free speech on college campuses, a rare opinion for a modern-day progressive. [Elizabeth Warren Says Campus Free Speech Means No Censorship or Violence, by Zaid Jilani, The Intercept, October 27, 2017].  But the rest of Warren’s party believes these corporations need to censor more. For instance, Democrats on House Energy and Commerce Committee announced last month that they plan to grill tech execs on why they haven’t done more to stamp out “hate speech and misinformation”. [Democrats vow Congress will ‘assert itself’ against tech, by Tony Romm, The Washington Post, February 26, 2019]

There are other exceptions to the party consensus though. Presidential candidates Andrew Yang and Rep. Tulsi Gabbard have both called for tech giants to protect free speech on their platforms [Tulsi Gabbard Attacks Facebook over Censorship, Defends Free Speech for ‘All Americans’, by Allum Bokhari, Breitbart, March 14, 2019]. Yang has a plan to do so by treating large tech platforms as public utilities. This would allow the government to regulate Twitter, Facebook, and others to ensure they protect free speech.

This plan appealing to some on the Dissident Right as it could address our main criticism of Big Tech: these corporations silence our speech and impose their political bias on their users.

Warren’s proposal could also have a positive effect. It would dismantle the incredible power of Big Tech and create market advantages for platforms that stand up for free speech. We may not have to worry so much about one platform’s censorship if there is an equally viable alternative.

In typical Conservative Inc. fashion, National Review editor Rich Lowry opposes Sen. Warren’s proposal. In a Politico column, Lowry dismisses conservative concerns about Big Tech as simple distaste for the liberalism of tech execs and insists Google doesn’t do anything nefarious. [Don’t Break Up Big Tech, March 13, 2019] (He doesn’t disclose that National Review Institute receives donations from Google in his Politico column.) According to Lowry, Big Tech is an American success story and should be protected from government intervention.

Many Conservative Inc. types have bantered “muh free market” tropes for years to defend Big Tech’s power. Thankfully, several Republican politicians are different and have woken up to the threat of this insidious trend. Sen. Ted Cruz stood up for Sen. Warren when Facebook censored her ads and argued tech censorship threatens our democracy.

First time I’ve ever retweeted @ewarren But she’s right—Big Tech has way too much power to silence Free Speech. They shouldn’t be censoring Warren, or anybody else. A serious threat to our democracy. https://t.co/VoesOKSqhA

Cruz has grilled tech executives and experts in multiple Senate hearings on the censorship and bias exhibited by social media platforms. He has expressed interest in using antitrust laws to suppress Big Tech’s power [Ted Cruz: Use Antitrust Laws to Break ‘Massive Power’ of Tech Lords to ‘Subvert Our Democratic Process’, by Robert Kraychik, Breitbart, April 25, 2018] Cruz also stood up for Alex Jones when the Infowars host was banned by every major social media platform.

Am no fan of Jones — among other things he has a habit of repeatedly slandering my Dad by falsely and absurdly accusing him of killing JFK — but who the hell made Facebook the arbiter of political speech? Free speech includes views you disagree with. #1A https://t.co/RC5v4SHaiI

The Big Tech giants regularly abuse the public trust - spying on consumers, taking data without consent, discriminating against conservatives. Then they wonder why citizens are angry? Time to hold them accountable pic.twitter.com/m4vSNUKOBp

There’s both a spirit and serious ideas within the GOP to tackle tech censorship. Last October, the Watcher offered some ways that the President could address this serious issue. They are still relevant today.

Something as basic as Trump tweeting out criticism of Facebook and Google is actually remarkably effective. Tech giants are worried sick the President may target the industry and are wary of doing anything radical enough to draw his ire.…

Section 230 of the Communications Decency Act is a sacred privilege for social media companies. This law protects Facebook, Twitter, and other platforms from liability over the material published on their websites. One of the reasons these services are granted this privilege is the Congressional finding, embodied in legislation,  that they “offer a forum for a true diversity of political discourse.” [47 U.S. Code § 230 - Protection for private blocking and screening of offensive material] In contrast, newspapers are subject to libel actions over Letters to the Editor, because they are assumed to have exercised editorial judgement in publishing them.

Legislation amending Section 230 to explicitly state these companies may not engage in political discrimination would protect free expression for years to come.

In October, I wrote that "All Trump has to do is suggest the idea to allies like House Majority Leader Kevin McCarthy to get this done", which is no longer the case since the midterms.

The difference today is that the onus for pushing the president to do this lies with lawmakers like Sens. Cruz and Hawley rather than with Trump. Both Cruz and Hawley have called for Section 230 to be reexamined and utilized to protect free speech on social media platforms. There's a chance that one of these senators may propose legislation to expand Section 230 to specifically require viewpoint neutrality for platforms that benefit from its protection.

In contrast, Trump’s recent Breitbart interview shows he is basically unaware of any idea to deal with tech censorship.  This is why it is incumbent on prominent GOP politicians and Fox News hosts (Trump watches Fox News, right?) to suggest ideas to him.

All Trump has to do is tweet something about treating social media platforms as public utilities or mention section 230 to grab Big Tech’s attention.

And he must do something on this issue if he wants to be re-elected. “Being good” won’t save his supporters from being banned or his ads being blocked.

2020 is fast approaching. It’s time for the GOP and Trump to do something about Big Tech.

If they don’t do, Democrats will--and that action likely won’t help American patriots.