The Trump-obsessed press has paid little attention to important news like a major terror trial wrapping up in Minneapolis: nine Somali men were sentenced last week in Minnesota for their jihad terror crimes. But the liberal media ignores Muslims terror trials in America no matter what else is going on.

Interestingly, the mainstream press has castigated President-elect Trump’s pick for national security advisor General Michael Flynn for calling Islam a “cancer” despite numerous jihad murders in this country in Orlando, San Bernardino, Fort Hood and Boston. You would think that 9/11 never happened, given the public forgetfulness, promoted by the press in its worship of diversity.

The media ignore strong indicators of the continuing failure of Muslim immigration like the Minnesota terror trials. Somalis come here, chirping they came for “a better life,” but the young men want to go to the Middle East and Africa to kill for Allah. What happens when many more of them decide there are plenty of infidels in America to murder? For example, nine persons were stabbed in September in a shopping mall jihad attack.

A news story from a couple months ago reported the US had admitted nearly 100,000 Somali refugees since 9/11. That number sounds low, since the government doesn’t like keeping count of the unfriendlies it imports against the will of the American people.

Minnesota has struggled for years with assorted strategies to get Somalis to assimilate — expensive youth outreach, make-work social programs, even a basketball coaching scheme for one jihadist that failed — but the Africans have shown zero interest in wanting to acculturate. They prefer their Islamic values of jihad, polygamy, Islamic supremacism and misogyny. A filmmaker interviewed Somalis in Minneapolis last year and most openly rejected the Constitution and embraced sharia as their core belief. 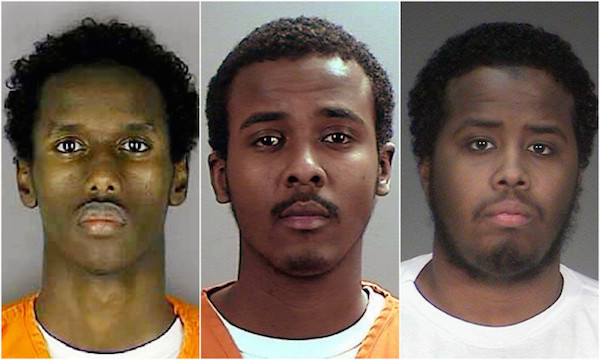 On Saturday, Fox News had a brief report about the Somali sentencing, including a clip of Iraq veteran Pete Hegseth visiting Little Mogadishu in Minneapolis, where he had a hard time finding Somalis who could speak English.

Don’t look for any responsibility from Somali parents or the tribe at large: they regard themselves as victims of kuffar persecution and despise America in general.

It’s good the judge at least tried to make a statement about the severity of Minnesota’s jihad problem.

Prosecutors doubt remorse, and the judge warns of terror cell.

Seeking to send an emphatic message that there is “no doubt” about the depth of terrorism recruitment in the Twin Cities, a federal judge on Wednesday sentenced the final three of Minnesota’s ISIL conspiracy defendants to the sternest prison sentences yet handed down in a Minnesota terrorism case.

“It’s clear, and I’ve stated it the last two days … this community has to understand that there is a jihadist cell in this community — its tentacles spread out,” Senior U.S. District Judge Michael Davis told a packed courtroom. “Young people went to Syria and died.”

Davis concluded three days of hearings by sending defendant Guled Omar to prison for 35 years, and sentencing two others — Mohamed Farah and Abdirahman Daud — to 30 years each. The three were the only defendants to plead not guilty and go to trial, where a jury in June convicted them of charges including conspiracy to commit murder outside the United States. They were also convicted of conspiring to provide material support to the Islamic State in Iraq and the Levant (ISIL), the same charge on which six others pleaded guilty and were sentenced this week.

Addressing Davis earlier in the afternoon, one of the prosecutors called Omar, 22, “not redeemable,” and said he presented a unique case because he watched his older brother leave Minnesota to join the Somali terror group Al-Shabab, then applied those lessons to advise the current group as its emir, or leader.

“He was like a well that people kept going to to get … advice, and he kept doling it out,” said Assistant U.S. Attorney Andrew Winter, adding that Omar “has blood on his hands” for helping two men now believed dead after reaching Syria in 2014.

Prosecutors sought a 40-year sentence for Omar, while his attorney, Glenn Bruder, called for 15. Standing before the judge Wednesday, Omar grew emotional as he said he didn’t want to continue down a “horrible path.”

“I understand the seriousness of what I’ve been convicted of, and I understand that I will not be able to go home anytime soon,” Omar said as relatives sobbed nearby. “I always had energy for justice as a young man, but I lost my way.”

But after passing sentence, Davis recalled Omar’s May 2014 attempt to drive away with two co-conspirators planning to cross into Mexico and fly overseas — foiled when Omar’s family intervened.

“Seeing them scream and holler and take the car keys … but you continued and continued,” Davis said. “You’re charismatic, and that’s why you’re being locked up for the period that you are.”

Jurors returned The day was marked by somber statements from the defendants, clashes between attorneys over their authenticity, and emotional reactions from relatives and supporters gathered at the federal courthouse in Minneapolis.

Outside, a multiracial crowd of demonstrators gathered, waving homemade signs and chanting, “No hate, no fear, Somalis are welcome here.”

Mohamed Omar, Guled’s older brother, stood nearby with a picture of his younger brother. He is on supervised release for threatening agents who arrived at his home to question Guled Omar during the FBI investigation.

“My mom will probably be dead by the time he comes out,” Mohamed Omar said. “He will not get to see her. Although it’s going to hurt us, it’s not going to break us.”

Seven jurors who convicted the men in June returned to see them sentenced on Wednesday. They witnessed a lengthy digression by Davis during Daud’s midday sentencing, as the judge acknowledged that his judgments were harsh, but not “an attack on the Somali-American community.”

“The vast majority of Americans don’t have the slightest idea of what the Somali-Americans have gone through,” Davis said.

“I do,” Daud replied. “I was throwing away the same life that they were saving.”

Daud, 22, was arrested in California in 2015 after trying to buy an illegal passport and cross into Mexico. Dressed in a suit and speaking softly, he bluntly outlined his thinking before the judge Wednesday.

“I was not going [to Syria] to pass out medical kits or food to the people I believed at the time to be innocent,” Daud said. “I was going there strictly to fight and to kill on behalf of the Islamic State, your honor.”

His voice breaking, Daud added: “I am certainly not being persecuted [for] my faith. And I was certainly not entrapped nor lured into doing any of these crimes.” His comment seemed to contradict a group of demonstrators outside the courthouse, who continued to argue that the young men were entrapped by the FBI.

Daud’s attorney, Bruce Nestor, told Davis he believes his client poses no threat to society, but conceded: “I recognize that you cannot and will not take that risk.”

Daud, she said, “knows how to play a role. It’s just him playing a role again.”

Allyn described how Daud told Abdullahi Yusuf, the youngest member of the conspiracy group, to watch terrorist videos, and provided him phone numbers of ISIL contacts in Turkey. Daud was no mere follower, she said.

‘A road nobody expected’ In an unusual development at midday, both Daud and Farah were returned to the courtroom after being sentenced when prosecutors noted that they flashed index fingers pointed upward while looking into the gallery after their hearings. Prosecutors said the gestures symbolized “tawhid” — a tenet representing “oneness with God” — that has also been used by ISIL supporters.

In his own hearing as the day began, Farah, 22, told the judge he now disavows terrorist groups and realizes that extremist organizations such as ISIL “don’t stand for peace.” A day earlier, his younger brother Adnan was sentenced to 10 years after pleading guilty in April.

“We ended up on a road nobody expected,” Farah said. “Your honor, that’s the allure and the dangers of terrorism.”

Mohamed Farah, the eldest of six siblings in a Somali-American family in Minneapolis, was stopped at JFK Airport in 2014 while trying to leave for Syria and was later caught on tape saying he would kill any FBI agents who got in his way. Farah also looked back at his parents and siblings in the courtroom. “For them to see me today in an orange jumpsuit is not my idea for what a role model should be,” he said.

“These are young kids, young men, that are battling each other, one-upping each other with their level of religiosity,” said Farah’s attorney, Murad Mohammed. “In essence they radicalized each other.”

Mohammed also said that, in retrospect, his client should have pleaded guilty with other co-defendants last spring before more serious charges were added to his indictment.

Prosecutors pointed out that in 2014 and 2015 Farah showed every sign of being a determined ISIL soldier — trying twice to leave the United States for Syria — and that he lied repeatedly to investigators while declining opportunities to cooperate with the government.

Davis, too, returned to the gravity of the crimes committed. As he had done Monday and Tuesday, he showed the courtroom one of the grisly ISIL recruiting videos the young defendants had watched: A 12-minute clip of one of ISIL’s most notorious propaganda pieces, concluding with the burning alive of a captured Jordanian fighter pilot in early 2015.