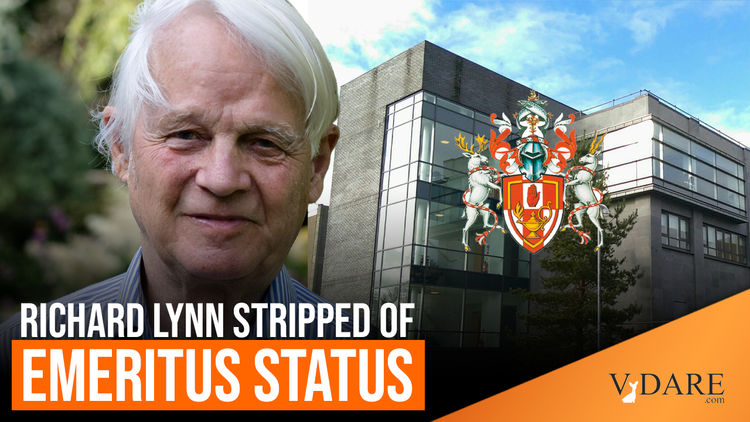 Richard Lynn's MEMOIRS OF A DISSIDENT PSYCHOLOGIST: Life Story Of A Genuine Scientist

Earlier: Richard Lynn Stripped Of Emeritus Status For Saying The Same Things That Made Him A Professor In The First Place and “He Kept The Faith”—A Conversation With Richard Lynn 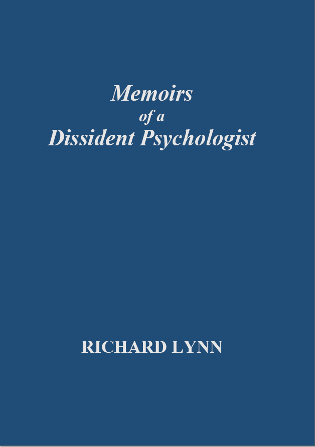 Everyone with an interest in why our world is the way it is owes a debt of gratitude to Richard Lynn, the indefatigable psychometrician best known for his studies of how human intelligence varies by country, race, and sex, as well as over time. He has provided ironclad documentation of the differences themselves, theorized about their evolutionary origins, and (with some help from his late Finnish colleague Tatu Vanhanen) demonstrated their explanatory value in relation to economics and politics. Lynn has now written an account of his life, Memoirs of a Dissident Psychologist.

Lynn’s work has made him many enemies, and as science seems to be moving into a new Dark Age, things seem to be getting worse. Two years ago, long after Lynn’s retirement he was formally stripped of his (purely honorific) emeritus status at the University of Ulster, where he had created a psychology department from scratch and taught for twenty-three years. This was in response to a students’ union resolution accusing Lynn of advocating “racist and sexist” views. Of course, Lynn never simply “advocated views,” but rather published findings: a distinction apparently lost on both students and university authorities.

He writes of a lifelong attraction to “big ideas.” In his youth, this meant joining the Young Communist League. There he learned that capitalist countries needed two parties, one to represent the capitalists and one the workers—but that the Soviet Union, having overcome class conflict, only required one. Within about a year, he began developing doubts about Communism, but he remained a socialist for some time. 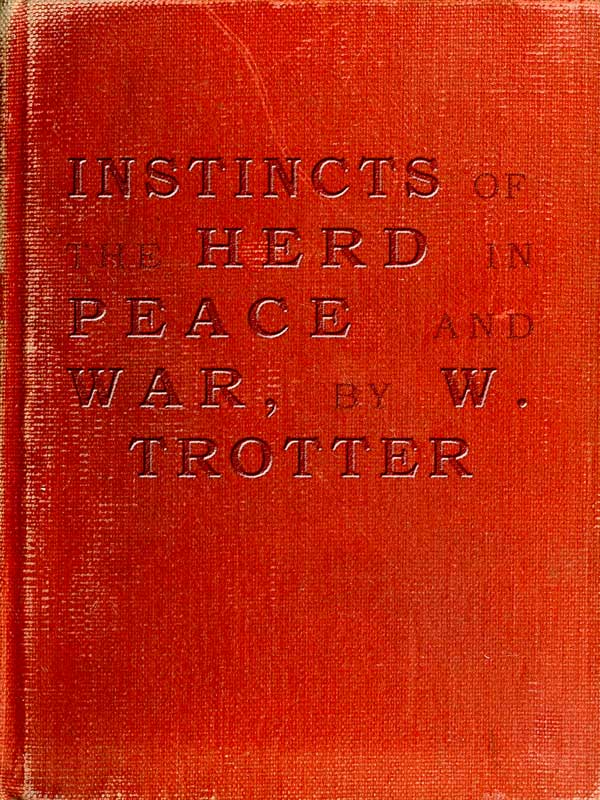 While Lynn was still a schoolboy, his father—a scientist and world expert on the genetics of cotton—gave him Wilfred Trotter's Instincts of the Herd in Peace and War, a study of the human tendency to identify with groups, and suggested he consider studying psychology. The young Lynn had been attracted to history, but eventually he became dissatisfied with the discipline “because it was impossible to find the patterns that can be found in the sciences.” He was drawn to psychology as a way of getting at the ultimate wellsprings of such human behavior as warfare.

During a stint of Army service before he went to Cambridge, Lynn also found time to read Francis Galton’s Hereditary Genius (1869). Galton believed, and subsequent research has verified, that intelligence is a single entity and largely hereditary. He observed that in advanced civilizations the more intelligent individuals tend to have fewer children, with the result that the intelligence of the population declines. Lynn writes: “I found all this very interesting and it confirmed my intention to take psychology when I went up to Cambridge.”

He was to be disappointed. The intellectual heirs of Galton at this time were known as the “London School” of experimental psychology, led by Sir Cyril Burt and Hans Eysenck, but the entire psychology faculty at King’s College, Cambridge, where Lynn studied, detested them:

They never tired of deriding this group. My father told me that Sir Cyril Burt was nominated for fellowship of the Royal Society from time to time, but Bartlett [chairman of the King’s College Psychology Department] invariably blackballed him.

Lynn’s mentors favored environmental explanations, and their intelligence specialist told him that the low IQ of blacks in the US was attributable to discrimination.

Lynn’s introduction to hereditarianism came when his father introduced him to the botanist and geneticist Reginald R. Gates, who said the lower IQ of blacks was due to genetics:

This was the first time I had heard this view and as Gates was a Fellow of the Royal Society and a distinguished geneticist I took it seriously. Gates also asked me my opinion about eugenics and I told him I had read the studies by Burt and Cattell showing that intelligence was declining and I agreed with Cattell that eugenic measures were needed to correct this. He told me that he took the same view.

Adam Smith, whom Lynn read as a Cambridge undergrad, proved too much for his socialist convictions. Nor did British workers appeared more satisfied under Attlee’s Labour government than they had been before. And, Lynn writes,

I was also concerned about the Commonwealth Citizens Act of 1948 which gave all Commonwealth citizens the right to come and live in Britain. As there were about a billion of these I doubted whether this was sensible. When the wisdom of this was questioned in the House of Commons by a conservative, a Labour minister assured him that very few would actually come. A week or two after the act was passed the first immigrants from Jamaica arrived on the Empire Windrush.

In 1959, for the first time, Lynn voted for the governing Conservative Party because they

…pledged to restrict the immigration from our colonies. I thought this was sensible because I believed it could be anticipated from Herbert Spencer's in-group-amity out-group enmity principle, rebranded as ethnocentrism by William Sumner in his 1906 book Folkways, that there would be tension and conflict between the immigrants and the indigenous population.

In the 1960s, Lynn joined the British Eugenics Society in an effort to find independent-minded people like himself, but this proved a disappointment. By this time, the Society was running scared. Within a few years they removed the word “eugenics” from their name and that of their journal, and took to limiting their focus to such bland subject matter as contraception in Third World countries.

Between 1967 and 1972, Lynn was employed by Ireland’s Economic and Social Research Institute (ESRI). The purpose of this body

…was to carry out research on the economic and social problems of Ireland. Foremost among these was that Ireland was quite economically backward compared with Britain, and I researched the literature to see what contribution I could make. It was not long before I discovered a study that reported that the IQ of Irish 12-year-olds was 90 compared with 100 in Britain.

Lynn independently confirmed this, but with uncharacteristic caution decided not to publish on the subject at that point.

It was also at ESRI that he met the son of John C. Raven, developer of one of the world’s most widely used intelligence tests, Raven’s Progressive Matrices:

These were the seeds from which Lynn’s later book IQ and the Wealth of Nations (2002) would grow.

Lynn went on to establish a new Psychology Department at the University of Ulster and taught there for twenty-three years. In 1991 he published a theory that the Ice Age had increased European and Northeast Asian IQ by applying selective pressure for intelligence. In response,

two coaches of people from the Anti-Nazi League came to the university and disrupted my lecture and put up posters demanding “Sack racist Lynn”. The university administrators did not call the police or make any attempt to stop them.

Emphasis added. The current crisis in the West’s universities has been thirty years in the making.

A slightly less uncivilized incident involved Lynn’s attendance at an academic conference where he was outnumbered by colleagues who favored environmental explanations of human behavior. One of these asked him whether he felt he was among enemies:

I said I didn’t because I have never thought of these environmentalists as enemies and it is difficult for me to understand that this is how many of them regard me and others who regard genetic factors as important.  Work on race differences excites a huge hostile emotional reaction in many people. This has always been difficult for me to understand, since for me race differences are simply a matter of scientific interest and I have never felt any emotion about the question.

Indeed, Lynn once pointed to his demonstration that Northeast Asians had higher average IQs than Europeans as one of his three most significant scientific achievements. (The other two items were 1) discovering that the black African IQ was about 70 rather than similar to the Black American average of 85; and 2) his compilation of studies on race and IQ around the world along with the "cold winters" theory of their origin.) [Race, Dysgenics, And The Survival Of The West, The Occidental Quarterly, Fall 2007] Yet this disinterested approach to knowledge appears unintelligible to Lynn’s critics, who continue to accuse him of “trying to prove” the superiority of his own race.

Fanatical egalitarians have not been the only force working against Lynn’s ideas. Another challenge has been the intellectual inertia and small-mindedness of most academics. In 1998, Lynn delivered a paper on dysgenic fertility. He recalls:

None of the audience expressed any interest. I had expected someone would say: “You mean the national intelligence is deteriorating genetically? Wow! This sounds really serious. What could be done about this?”  But I did not get a single question. My paper was greeted with total indifference. This confirmed my previous experience that one of the strange things about psychology is that there are a few really interesting and important questions but hardly anyone is interested in them. I have always found that at psychology conferences virtually all the papers are concerned with trivia. 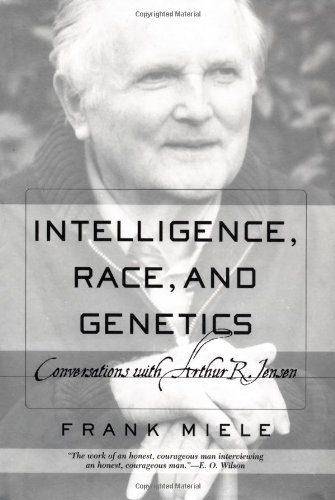 This academic mentality goes far to explain such anomalies as Hans Eysenck’s failure to be elected a fellow of the British Psychological Society, or Arthur Jensen’s never receiving “any of the many medals that the American Psychological Association hands out each year to nonentities.”

Lynn once asked Jensen about his willingness to dissent from popular orthodoxies:

He replied that he thought the explanation was that he didn’t mind being disliked by a lot of people. Most people, he said, have a dread of being disliked, but this was not something that bothered him. On another occasion, he told me that he had never had any interest in team sports. This is likely attributable to Jensen’s lack of identification with groups and is a further expression of his independence of mind.

Lynn reports a similar indifference in his own youth as to whether his school won or lost athletic matches. He contrasts this with the behavior he observed in many graduates of English “public” (i.e. ,elite private) schools, where boys were beaten for even trivial breaches of the rules:

The objective was to instill a respect for authority and fear of stepping out of line. This was frequently effective and perhaps a good discipline for those who would later enter the armed services, civil service or the church and generally stood them in good stead in their subsequent careers.

Of course, it is notably fair of Lynn to point this out. But, as he goes on,

Our universities are increasingly authoritarian institutions designed for conformists. It is hard to see that a young Richard Lynn would succeed in academe today.

In this age of academic corruption and cowardice, it is a joy to read the life story of a genuine scientist. Don’t miss Memoirs of a Dissident Psychologist.