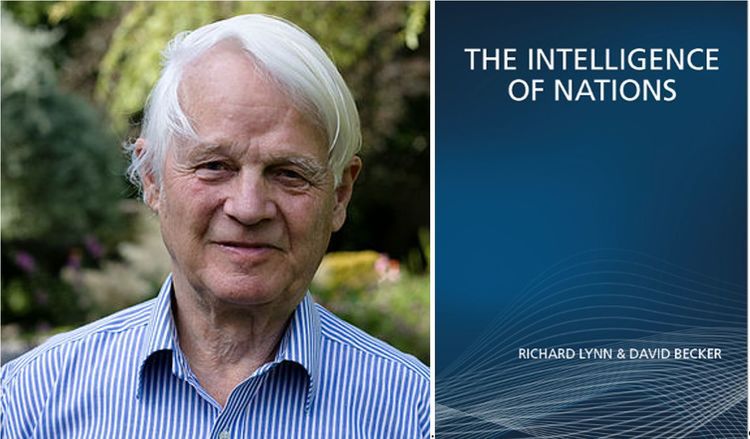 THE INTELLIGENCE OF NATIONS: Lynn And Becker Crush CultMarx Race Deniers—But They’re Too Crazed To Notice

Richard Lynn, now 89 years old, has made it his mission to discover the average IQ of every country on Earth. His first book on the subject, IQ and the Wealth of Nations [2002], written with Finnish political scientist Tatu Vanhanen (1929-2015), was put out by Praeger, a mainstream academic publisher. Since then, Lynn, usually with Vanhanen, has authored or co-authored a succession of books expanding on the same topic—Race Differences in Intelligence (2006), IQ and Global Inequality (2006), The Global Bell Curve (2008) and Intelligence: A Unifying Construct for the Social Sciences (2012)—published either by Washington Summit or his own Ulster Institute for Social Research. And now we have yet another one: The Intelligence of Nations, co-authored with a young German political scientist David Becker, based at the Technical University of Chemnitz in what was formerly East Germany. It is the most important of all of Lynn’s sequels, possibly even more worthy of your time than was the original—especially because Cultural Marxist Race Denial is now eliminating, not merely public debate on the topic, but also academic science.

This ever-tightening Political Correctness stranglehold means that it’s impossible now for Lynn to publish his research via a house like Praeger. Similarly, conventional academic journals at least reviewed IQ and the Wealth of Nations, albeit nastily, but ten years later, there was no way they would review Intelligence: A Unifying Construct for the Social Sciences.

Indeed, in the wake of the uproar surrounding student journalist/ enforcer Ben Van der Merwe’s 2018 “discovery” of the London Conference on Intelligence, the University of Ulster caved into pressure and stripped Lynn of the Emeritus Professorship it had awarded upon his retirement, by implication (the university simply referred to “all relevant information”) because it had only just discovered (Lynn taught there for forty-six years!) that his research was “racist and sexist in nature,” exactly as the student Leftists had claimed. [Ulster University withdraws status from Prof Richard Lynn, BBC News, April 14, 2018] VDARE.com’s James Fulford commented that Lynn was being stripped of emeritus status “for saying the same things that made him a professor in the first place.”

As mentioned, Lynn and Vanhanen’s IQ and the Wealth of Nations received sensationalist and often extremely hostile academic coverage, with critics questioning the soundness of its methodology, the reliability of its data etc. Thus two female psychologists asserted that “we see an edifice built on layer upon layer of arbitrary assumptions and selective data manipulation. The data on which the entire book is based are of questionable validity and are used in ways that cannot be justified.” They concluded that Lynn and Vanhanen’s international comparisons were “virtually meaningless”. [National Intelligence and the Emperor’s New Clothes, by Susan Barnett & Wendy Williams. Contemporary Psychology. 2004]

And there were some reasons to criticize the book. Lynn and Vanhanen had data for 81 out of 185 countries and so had to make heroic estimates for that of the missing countries. Some national samples were small or highly elite and some of their literature reviews appeared haphazard. This allowed bigoted critics to engage in what was really the composition fallacy: to take a number of small mistakes and so cast doubt on the entire body of research.

As Estonian psychologist Juri Allik has put it: “A useful strategy is to discover a few small mistakes, declaring that all the results are equally suspicious”. [Geographical distribution of mental abilities and its moral consequence, by Juri Allik, European Journal of Personality, 2007].

This smear technique is best exemplified in British psychologist Nicholas Mackintosh’s review of one of Lynn’s books: “The errors may not be particularly important, and I do not know how typical they are. But they do not increase my confidence in Lynn's scholarship.” [Review: Dysgenics, By Nicholas Mackintosh, Journal of Biosocial Science, 2002]

However, the sequels made steady progress. For example, Intelligence: A Unifying Construct for the Social Sciences presented numerous national level IQ proxies—education, health, democracy, and many more—and showed that they strongly correlated with the national IQ scores in the expected direction.

Still, what was not dealt with was the possibility of minor errors, the possible use of incompatible samples, and a lack of openness and systematic rigor with regard to how the national IQs were calculated.

Somebody—I would have preferred, purely for polemical reasons, somebody other than Lynn—needed to painstakingly go through all of the datasets, sort out all of the minor mistakes, dispose of the poor samples, update the dataset on an ongoing basis, and clearly set out exactly how conclusions were being reached.

That would mean that whenever a journalist, or SJW scientist, criticized a particular national IQ as problematic in some way, then they could be refuted immediately. Whenever they insinuated that these data were based on “assumptions,” or were “manipulated,” they could be set right at once, via an easy-to-use, online, continuously updated resource.

This is what Lynn’s new co-author David Becker’s has accomplished with his website View On IQ. The Intelligence of Nations presents these results as of the point of going to press.

Accordingly, the book is the most comprehensive, clearly presented, iron-clad-from-nit-picking, book on national IQs in existence—a go-to reference for those researching national differences in IQ. It also takes us far beyond the other books in the Lynn series.

For example, The Intelligence of Nations has managed to increase the number of IQ test administrations available for many countries by converting national scores of international educational assessment tests into average national IQ scores, showing, in great depth, how this has been accomplished. These international educational assessment tests involve very large and highly representative samples and scores in such tests strongly correlate with IQ scores.

But for the less technically minded, this and similar innovations do, of course, mean that a portion of the book is devoted to some very complex math.

Becker’s careful, systematic approach has also resulted in numerous new estimates for the national IQs of different countries—though his results do correlate with Lynn and Vanhanen’s at around 0.87.

The United States hasn’t changed much, declining from 97.7 to 97.43. But that’s a lower average IQ than most Western European countries, the majority of whom hover around 100.

If I were to make a criticism, it is that Lynn’s results needed to, in effect, be independently replicated—which is essentially what Becker has done. But it seems to me that it would be far more useful if  Becker, the sole contributor to his website, were the sole author of this book.

It would also have been ideal to publish The Intelligence of Nations with any publisher other than Ulster Institute for Social Research, as this organization headed by Richard Lynn himself. This will enable critics to argue that this is not an independent replication and they may also speculate that the authors couldn’t get the book published by a house not controlled by Lynn—which is probably true, but not for the reasons they insinuate.

To avoid these criticisms, I suspect that researchers will prefer to cite Becker’s website over this book, because Lynn has no overt involvement with it.

But, that aside, if you’re interested in the important area of national IQs then it will be invaluable to have The Intelligence of Nations within easy reach—something I personally have already found.