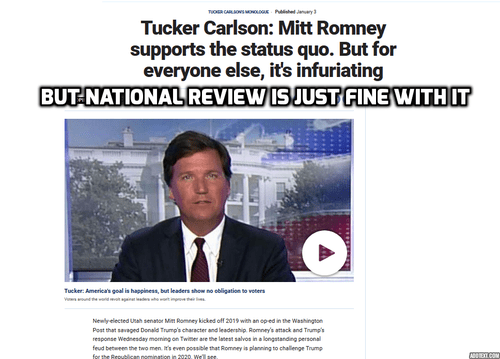 Tucker Carlson’s critique of unrestrained capitalism last week sent the Respectable Right into apoplectic fury. That’s why it’s irrelevant—and why Carlson is increasingly emerging as a name to conjure with.

In a now-celebrated monologue on his Fox News show, Carlson blamed multinational corporations and urban elites for the decline of Middle America. [Mitt Romney supports the status quo. But for everyone else, it's infuriating, Fox News, January 3, 2019] He listed several social ills that he attributed to unrestrained capitalism, including predatory loans, higher drug use, declining marriage rates, and shuttered factories.

Carlson lambasted “conservatives” who bemoan the decay of the family but refuse to consider if capitalism played any role in that tragedy. According to Carlson, “conservatives” consider criticism of the free market to be apostasy.

He offered this blunt advice to Republicans who want to make America great again.

Republican leaders will have to acknowledge that market capitalism is not a religion. Market capitalism is a tool, like a staple gun or a toaster. You’d have to be a fool to worship it. Our system was created by human beings for the benefit of human beings. We do not exist to serve markets. Just the opposite. Any economic system that weakens and destroys families is not worth having. A system like that is the enemy of a healthy society.

Needless to say, this opinion was met with frothing anger by several Conservatism Inc. writers, a crowd that seems to believe the free market a holy thing that must not suffer blasphemy. They were upset that anyone would dare suggest that the state could act to rectify social ills, arguing that this was rank demagogy and antithetical to conservatism. National Review published several op-eds condemning Tucker’s monologue—a sure sign of Respectable Right displeasure.

David French, briefly Bill Kristol’s Never Trump catspaw,  represented the typical response in The Right Should Reject Tucker Carlson’s Victimhood Populism. [National Review, January 4, 2019]. French claims to agree with Carlson that Middle America suffers from numerous ills, but he argues the state should play no role with fixing them. Thus payday loans are a necessary part of capitalism, drug criminalization is bad because it puts nice minorities in jail, and radical feminism and Affirmative Action aren’t serious concerns.

French also defended the virtue of America’s elites, citing their charitable giving (including to National Review?) to absolve their disdain of the working class and support for outsourcing:

Carlson is advancing a form of victim-politics populism that takes a series of tectonic cultural changes—civil rights, women’s rights, a technological revolution as significant as the industrial revolution, the mass-scale loss of religious faith, the sexual revolution, etc.—and turns the negative or challenging aspects of those changes into an angry tale of what they are doing to you.

French’s solution is for the working class to go to community college and for America to magically experience an organic renewal of virtue. It’s all up to the individual to make America better:

[T]he primary responsibility for creating a life of virtue and purpose rests with families and individuals. In fact, it is still true that your choices are far more important to your success than any government program or the actions of any nefarious banker or any malicious feminist.

It is certainly true that your family and your own choices has a great influence over whether you live a virtuous and even happy life. But that does not show how social ills will somehow be corrected by self-help advice.

Additionally, as one man from a Midwest town destroyed by plant closures pointed out on Twitter, community college and re-training are not sufficient in equaling the old manufacturing jobs. “‘New tech always comes along to save the day’ does not apply. The late 19th-Century farm workers who flocked to Henry Ford for jobs after the last great labor upheaval have nowhere to go this time,” the man, Tom Ferguson, tweeted.

(See the whole thread here, here, or (as a screenshot) here.)

French also failed to consider how much influence a “malicious feminist” can have over the lives of normal people. Just one “offensive” tweet can cost somebody their career and reputation if Leftists stir up a mob. Good luck finding a job if your Google history is says you’re a sexist. Additionally, Human Resources Departments are run to conform to Leftist dictates, and your private speech and views could draw the suspicion of HR at any time.

Daily Wire editor-in-chief Ben Shapiro attacked Carlson in two separate articles. The first, for his own website, zealously defended the greatness of the free market and the purity of movement conservatism: “Traditional conservatives recognized that the role of economics is to provide prosperity – to raise the GDP,” is a sentence that best summarizes Shapiro’s ridiculous retconning of a once-great movement  [Tucker Carlson Claims Market Capitalism Has Undermined American Society. He's Wrong., by Ben Shapiro, Daily Wire, January 4, 2019]

Shapiro truly believes the free market is one of the greatest things to ever exist and it must not be restrained. All social problems, according to him, are due to individual choices and we should not seek collective solutions to social ills like declining marriage rates and fewer good jobs for working-class males. Trust the free market and insist a virtue renewal will resolve the problems state aims to solve.

Shapiro followed up his Daily Wire column with a short column in National Review that also insisted we need a virtue renewal instead of a state intervention into the market. Shapiro believes we just need Americans to stop wanting “stuff” and exhibit virtue in order to bring back Middle America [America Needs Virtue before Prosperity, by Ben Shapiro, National Review, January 8, 2019].

“Carlson’s claim that material gain isn’t enough to provide happiness doesn’t lead him back to virtue, which would bolster additional freedom. It leads him to the same material solutions that undercut virtue in the first place,” Shapiro concluded,.

It would be nice if people would make themselves better and get the right job training after they read one National Review column. But that’s not going to happen and Shapiro offers no means for enacting a renewal of virtue.

In effect, all of Carlson’s Conservatism Inc. critics demand we must do nothing about the woes of working-class whites and the free market will figure out something.

So at a time when a majority of Americans—including a majority of Republicans—support single-payer healthcare and other big government initiatives, Conservatism Inc. pundits offer platitudes about limited government and the greatness of capitalism [Most young Americans prefer socialism to capitalism, new report finds, by Kathleen Elkins, CNBC, August 14, 2018].

This will not end well.

Indeed, Carlson anticipated noted this response in his monologue:

Socialism is exactly what we’re going to get, and very soon unless a group of responsible people in our political system reforms the American economy in a way that protects normal people

(Carson did not directly mention immigration, somewhat surprising because it has been one of his long-standing concerns. But it ties into this debate. Many of the Conservativism Inc, types outraged at Tucker also support mass immigration and buy into the notion that America is a “nation of immigrants.” They see America as primarily an economy or an idea, not a nation. Tucker’s national populism reverses those false notions—America is a nation first and its primary responsibility is to its citizens, not the GDP.

Carlson’s economic populism pairs with his support for patriotic immigration reform: both policies aim to serve the people’s interest and strengthen America as a unified community. This vision conflicts with multinational corporations who would rather see America as one giant strip mall filled with atomized customers. Not surprisingly, these companies oppose patriotic immigration reform. Also not surprisingly, so does Conservatism Inc.

The unfortunate fact is that American corporations pose the greatest threat to our fundamental liberties and way of life. They censor free speech, make banking difficult for political dissidents, exclusively promote progressive causes, listen to foreign governments more than our own, promote mass immigration, and demonstrate a loyalty only to their own profits and power. Currently, in fact, they are increasingly boycotting Tucker Carlson’s show, to Leftist applause.

The only institution that can stand up to corporations and tell them to change is the state—which happens to be the only institution patriots can have any influence over. Academia, Hollywood, corporate America, and the Establishment Media are all under the thrall of Cultural Marxists. (The churches are a more complicated matter, but fewer Americans listen to religious leaders in our day and age.)

Americans cannot expect a civic renewal from our social institutions. Conservatives wield zero influence over a culture that encourages drug use, sexual promiscuity, agnosticism, and women’s’ choosing career over family. We are not going to experience a social renaissance just by wishing for one.

If we want our society to improve, we have to push for state policies with that goal in mind. There is no other option.

It’s time to discard the worn-out conservative dogmas and make the state serve the people. National populism is the only path for Republicans to remain viable and (yes!) make our country great again.