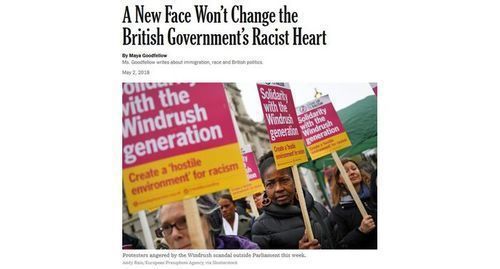 The Zeroth Amendment to the British Constitution

As we all know, Founding Father Emma Lazarus carved the Zeroth Amendment — Anybody anywhere can immigrate here because any citizen who dissents is a racist who shouldn’t have any First Amendment rights — into the American Constitution in 1787 (give or take a century). Less well known, however, is the Zeroth Amendment to the British Constitution. But you’ll hearing more about it:

… But the policies that led to this appalling affair will stay in place. People the government classifies as “illegal” will still be treated with contempt, and someone could still easily end up deported just because of a misplaced paper or a change in the rules — exactly what happened to the Windrush generation. …

Without an end to the hostile environment and the government’s inhumane approach to immigration, which treats every person thought to be a migrant with suspicion, Mr. Javid’s appointment doesn’t alter a thing.