Murrayism (As In Charles Murray) Has Failed. Now What?

Charles Murray (The Bell Curve, Coming Apart, Human Diversity) is rightly bitter about the disgraceful shutout of his latest book Facing Reality: Two Truths About Race from the current U.S. and international debate—actually, dogma—about “systemic racism.” But what this shutout shows is that what John Derbyshire has called a “Murraytopia”— “people accept reality, including the reality of race differences, and social advancement is strictly meritocratic”—is impossible. And, more immediately, it shows that “Murrayism”—trying reasonably to discuss racial differences while making many concessions to the anti-science Left and suppressing Politically Incorrect science that goes further—has failed. Now what?

Murray laid out his disillusionment and despair in a Twitter thread this summer: 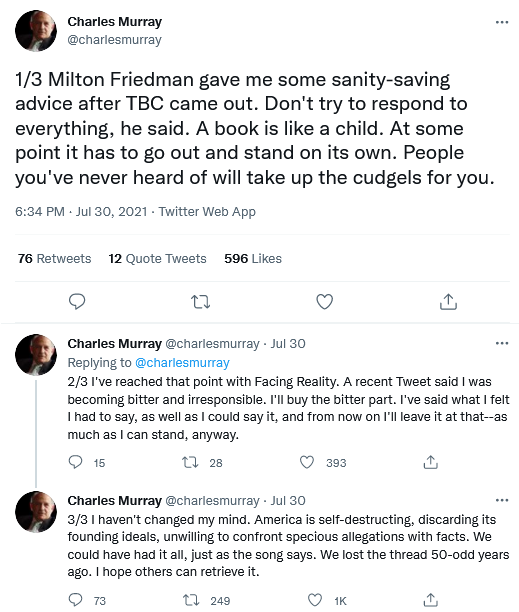 Perhaps indicative of this despair, Murray has petulantly refused to review Kathryn Paige Harden’s disingenuous attempt to make genetics palatable to progressives, The Genetic Lottery, because she used him—again disgracefully—as a strawman: 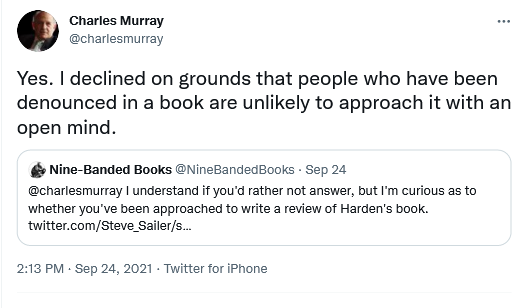 This is ironic because both Harden and Murray indulge in what I call “bravery signalling.” Thus Murray engages with the Great Taboo, but ignores scientific explorations of race differences that go even further, such as by showing that these race differences in IQ are almost certainly genetic (which I discussed in my own book Making Sense of Race). I have earlier argued this was the case with his Human Diversity [Bravery Signaling, Geopol.institute, February 16, 2020].

“Bravery signalling” means you avoid the furore that might be caused by really engaging with the Great Taboo. In doing so, you hope to gain the support of “moderates” and thus more easily influence the national conversation.

Murray has explicitly admitted this: 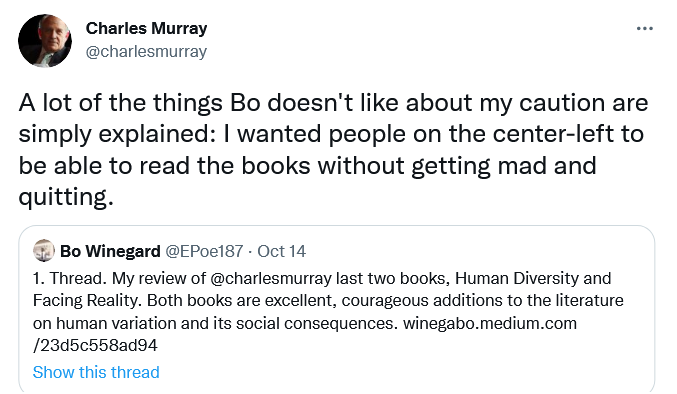 But, as Razib Khan has pointed out, unlike in the case of The Bell Curve in 1994, mainstream newspapers are still not even prepared to review Murray’s book. Written in response to the American anarchy of 2020-1, brought about by the death of George Floyd, Black Lives Matter and the disputed presidential election, Murray’s essay was a call—albeit delivered calmly and with reference to persuasive data—to a return to an America of individuals in which all Americans have equal rights and are judged as individuals.

Murray argues that this really is the founding creed of the United States, which Martin Luther King successfully argued should be fully extended to all African-Americans: that all Americans should be treated as individuals, rather than as manifestations of their race or class, and should be permitted to flourish, or not flourish, accordingly.

In Facing Reality, Murray charts that way in which this, from his perspective, noble idea has been gradually distorted such that Americans now live in a kind of fairground mirror version of the Jim Crow Deep South—although, needless to say, he does not put it in these terms.

Now, the prevailing ideology appears to be that White people should be discriminated against in law in order to atone for the wrongs historically done to American black people by white people. And black people should have, in effect, privileges—in education, in employment and in much else—because their ancestors, or simply people that looked like them, experienced slavery and discrimination at the hands of white people.

Murray spells this situation out very well. He notes that it is rationalized by the claim that racial differences in economic outcomes, or even in crime rates, are entirely the result of environmental factors and in particular of “systemic racism” at the hands of whites.

But Murray proves, as patiently as anyone can, that this is simply not the case. He looks at the issue of “intelligence” and the most reasonable definition of it, refutes the criticisms of IQ tests in detail, including the argument that they are racially biased, and then shows that there exist mean race differences in average IQ scores, and that IQ is a highly significant factor behind socioeconomic status.

Not only that, but the more complex the job, the higher the average IQ required. This being so, he proves that the lack of equal racial outcomes does not imply “systemic racism” or “white privilege.” It just happens if you treat people as individuals.

Murray then turns to the idea that “police are racist against black people.” He demonstrates that is untrue. Black people commit far more crime, per capita, than white people and, in particular, serious crimes such as robberies and murders. If anything, Murray shows, it is whites who are arrested at a higher rate than they should be based on per capita race differences in criminality.

Murray concludes by arguing that the current situation—in which white people are legally discriminated against—is a new danger to the America in which “All men are created equal.” He claims it is likely to result, and is resulting in, a gradual white backlash in which white people—just as black people have been doing, especially since the Civil Rights Era—start to create a strong sense that their identity and interests are based around being “white” and that they must stand up for themselves as white people. Murray believes that if this happens again, with the Republican Party becoming the de facto white party and whites decreasingly trusting the government, it will potentially be the end for America’s Founding Ideals.

My view: Murray’s book is about 40 years too late. America is already too divided, too low in trust, too angry, too emotional. As VDARE.com has reported, America is extremely polarized, to the extent that it was on the eve of the Civil War. Over a quarter of white evangelicals are firm believers in Q-Anon and thus regard the U.S. government as literally Satanic [How QAnon captured the American church, by Oliver Wiseman, Unherd, June 16, 2021]. Conversely, although less widely reported, extraordinary numbers of Democrats believe Russia actually hacked voting machines in 2016 to install Donald Trump as President [ALTERNATE REALITY: 58 Percent Of Dems Think Russia Rigged Vote Count To Get Trump Elected, by Peter Hasson, Daily Caller, May 31, 2017].

Murray’s book is clear, concise, and well argued. But I’m not really sure who he is trying to convince. It’s not for people like me, or VDARE.com readers. It’s not even for most conservatives: they know these things even if they are careful not to discuss them, let alone review books that discuss them.

Does Murray feel that there is a new generation—Generation Z—a portion of whom have been inculcated with Woke ideas, but are intelligent and questioning enough to be dissuaded of them, and have an insufficient attention span to read The Bell Curve?

If so, then it could be argued that by presenting his argument in a dry style, with little anecdote, Murray is making a point of not patronizing these people; of treating them as intellectual equals and hoping that they’ll appreciate it. But shouldn’t the book be more clearly aimed at them in particular?

Why has Murrayism failed? As I have noted in my book At Our Wits’ End: Why We’re Becoming Less Intelligent and What It Means for the Future, America shows every sign of being in the Winter of Civilization. Once you are questioning all the old ways, mocking your civic religion, riven by ethnic diversity and its inherent conflicts, utterly polarized, and effectively taken over by foreigners whose ancestors did not found the nation, there is no going back.

America is too far gone. It is “Coming Apart”—at breakneck speed.