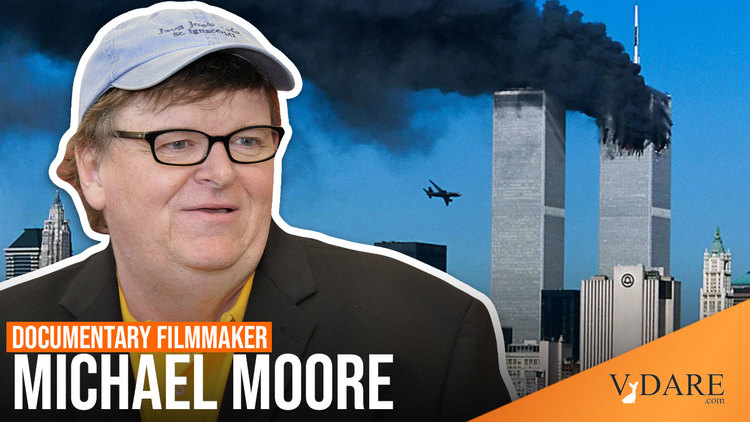 Michael Moore, Post 9/11 Patriotism, And The End Of America

Twenty years ago tonight, on September 11, 2001, many Americans felt that they had just seen Francis Fukuyama’s End of History revoked in the most brutal and dramatic way possible. The sense of rage, shock—and, somehow, pride—is impossible to recapture. It almost seems like it didn’t happen, or that it happened to someone else. That’s because it did happen to someone else. What we’re living in now has no relationship to the Historic American Nation.

Now, on this twentieth anniversary, there isn’t righteous anger, gut-wrenching sorrow, or even much remembrance. It means nothing to the country that exists now. Vladimir Putin may care more about it than our own elites. The Russian government successfully pressured the Taliban to avoid an “inauguration” ceremony for the new government on September 11 because it would be “inhuman” [Taliban cancel Afghan govt inauguration ceremony slated for 9/11 anniversary: Report, India Today, September 11, 2021]. Meanwhile, the current government of our own country is spending its days threatening its own citizens to take vaccines, even if they have already caught and recovered from COVID-19.

President George W. Bush told the world after the attacks that the enemy “hate our freedoms: our freedom of religion, our freedom of speech, our freedom to vote and assemble and disagree with each other” [Text: President Bush Addresses the Nation, Washington Post, September 20, 2001]. In fact, of course, the 9/11 hijackers objected to US support for Israel. But, in any case, none of these American “freedoms” now exist. In 2021, after collusion between the federal government and powerful corporations to impose censorship, deplatforming, and sweeping programs of imposed cultural and demographic change (with more on the way), claiming America is a “free” country just merits a derisive snort.

Indeed, speaking today at a memorial to Flight 93 in Shanksville Pa., Bush echoed the totalitarian UniParty line and insinuated that the January 6 Mostly Peaceful Protesters, whom the Regime Media has acknowledged were ordinary Americans and whom even the FBI (!) acknowledges were not part of a conspiracy, were “children of the same foul spirit” as the 9/11 hijackers. Driving home the UniParty’s determination to get on with its Great Replacement agenda, he added “At a time when nativism could have stirred hatred and violence against people perceived as outsiders, I saw Americans reaffirm their welcome of immigrants and refugees” i.e. America was not allowed to change its out-of-control immigration policy.

It’s not surprising Afghanis questioned America’s moral superiority over the Taliban—the Biden Administration’s last act of the war was to blow up the family of one of our supposed allies [Times Investigation: In U.S. Drone Strike, Evidence Suggests No ISIS Bomb, by Matthieu Aikins, Christoph Koettl, Evan Hill, and Eric Schmitt, New York Times, September 10, 2021].

Rather than killing Osama Bin Laden and leaving, the West spent its time and money trying to inflict the same post-modern horrors that destroyed our civilization on Afghanistan.

Still not over this video of some NGO trying to teach women in Afghanistan how to create "conceptual art". pic.twitter.com/BFzcTP6tZw

After the last year of BLM and its iconoclasm, we can’t even claim that America is superior to the cultural vandalism practiced by the Taliban.

A relic from the George W. Bush years, Leftist movie director Michael Moore, unintentionally brought home the nature of America’s defeat in his new essay claiming that “In The End, Bin Laden Won: He couldn’t have done it without us” [MichaelMoore.com, September 7, 2021]. No-one can dispute the title, considering the Taliban’s victory. However, what “us” could Moore be referring to?

As anyone who has seen his documentaries knows, Moore tends to meander. His argues America destroyed itself by going to war in Afghanistan instead of focusing on “capitalism” and the “climate,” which are apparently “our two true terrorist threats” to America, and indeed to the entire species. This rhetoric isn’t surprising, given his career. What’s shocking is his racial hatred against America’s majority population:

Osama, are you happy now? We were never “great” as the MAGA hats proclaimed, but we were good, we were, at least, most of us, trying. Of course the Black and Brown people know that’s not entirely true. They know that they may just have to save themselves and deal with us in the way we’ve dealt with them. Don’t worry white people—we’ve got 340 million+ guns in our homes! That’ll hold us for a while.

Moore revealed his underlying motivation recently when he commented on census data showing that the number of whites had declined for the first time in American history. To Moore, this was the “best day ever in U.S. history.” 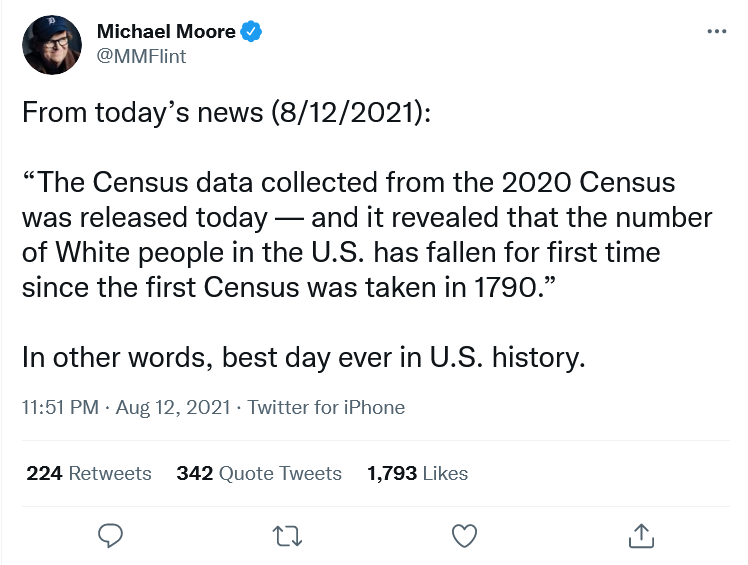 Not surprisingly, Moore reportedly has no children. Only a true moral pervert could say such a thing is the “best day ever in U.S. history,” instead of July 4, the end of the Civil War, or the Moon landing.

Of course, Moore may just be cynical. He reportedly lives in northern Michigan, one of the whitest areas of the country [Michael Moore said Torch Lake house, now for sale, not his ‘vacation home,’ by Jiquanda Johnson, MLive, January 20, 2019].

Indeed, marveling at the whiteness of Northern Michigan is something of a literary genre:

Moore’s NIMBYism isn’t unique or even that significant. Like most Cultural Marxists, he sees patriotic whites as the group obstructing his preferred social order. If he’s hypocritical about this in terms of where he chooses to live, that’s to his credit—hypocrisy and self-interest mean that at least he’s not insane.

However, the problem remains: what Moore sees as a problem to be solved via demographic change is the country itself. The Historic American Nation, of which the United States of America was once the political expression, was a real thing. We were a people with a shared culture, code, and identity. While it would be a mistake to say that America was uniformly white, it would be wrong to say that any other racial group created or could preserve the American nation.

More than that, it was English-speaking, Anglo-Protestant whites who created the nation. It was the WASPs who created the core culture that people were supposed to assimilate to. It was the loss of WASP elites in the early 20th century that enabled American decline. It was the forced demographic transformation after 1965, continuing and even accelerating after 2001, that guaranteed it.

The 2020 figures that Moore gloated about shows that “white alone” had declined to just over 60 percent of the American population [2020 Census Illuminates Racial and Ethnic Composition of the Country, Census Bureau, August 12, 2021].

I can at, least theoretically, understand why someone might celebrate increasing diversity. But the decline in absolute numbers of whites was also openly celebrated by Moore and many others [Why Do Leftists Celebrate White Decline? By Gregory Hood, American Renaissance, August 25, 2021]. If speech like this was directed against any other group, there would be universal acknowledgement that it is simply “hate” and met with disgust.

The Taliban retaking Afghanistan had something of inevitability about it. Afghanistan, after all, is the “Graveyard Of Empires,” with ancient tribal patterns and histories that can’t simply be rearranged by a few NGOs.

However, in the 20 years since September 11, 2001, it has been America that has been fundamentally transformed from what it was. And it’s not simply inevitable cultural change, but a deliberate program of demographic replacement.

More than this, it is coupled with an elite drive for a Second Reconstruction on a massive scale, with America’s heroes, values, and identity redefined into a mirror image of what existed before. This is what VDARE.com Editor Peter Brimelow calls “Anti-America.” It’s what reveals the utter obscenity of young men (and worse, women) being told to fight and die for the “American Way Of Life” only for that way of life to be mutilated and deformed.

Thus, on September 11, 2021, our Rulers don’t honor the heroes of Flight 93 or the firemen in New York City [The Betrayal of the Spirit of Flight 93, by Alexander Riley, Chronicles, September 2021]. Instead, the government is smearing the FDNY as racist. They keep the borders open, and carefully ensure that illegal aliens are exempt from the mandates imposed on lowly citizens [Biden’s vaccination mandate doesn’t include illegal immigrants, by Michael Lee, Fox News, September 9, 2021]. They plot to smuggle in Amnesty in a bill that’s supposed to be about helping the U.S. recover from a pandemic they enabled and a recession they imposed [Democrats make case to Senate parliamentarian for 8 million green cards, by Jordan Carney, The Hill, September 10, 2021]. Meanwhile, many Establishment Conservatives think the correct strategy is to attack the Biden Administration from the Left on immigration, faulting it for not bringing in enough Afghans. The idea of defending the American Way Of Life isn’t even mentioned.

Of course, what is our Way Of Life today? The America of 2001 still bore some resemblance to the America of 1776. It was radically changed, but as Orwell wrote of wartime England, it was changed in the way a child changes into a grown man.

But the Globalist American Empire of 2021 is, at best, a continent-wide shopping mall that peddles filth. At worst, it’s the base of operations for a fanatically anti-white elite that wants to spread its filthy creed to the entire world.

Either way, my country is gone. And European-Americans are a stateless people.

In retrospect, it was obvious it would end this way. In the immediate aftermath of the attacks, Ann Coulter wrote a memorable column calling on the United States to “invade their countries, kill their leaders, and convert them to Christianity.” For this, supposedly in the “nationalist” aftermath of 9/11, National Review fired her.

I don’t think it was for calling to “invade their countries” or “kill their leaders,” both of which America in fact proceeded to do. Instead, it was for the implication that America had a (Christian) culture and a civilization—that America was something more than a lump of dirt defined by egalitarian abstractions.

When Coulter wrote in 2001, the United States of America was still a nation. Today, “American” means almost nothing.

Twenty years after 9/11, even after the Afghan defeat, the war goes on. It’s just that now it’s being fought against the very people “our” government was supposed to be defending.