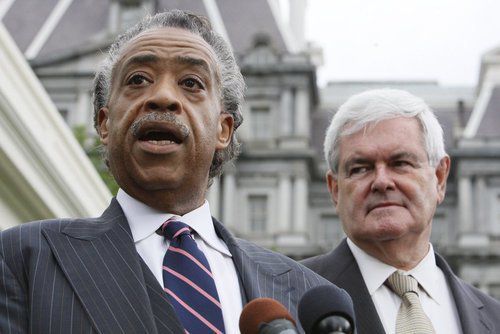 Above, the ex-Speaker is pictured with Al Sharpton during a 2009 tour promoting education, a faux pas by Gingrich so weird it was condemned by Jennifer Rubin.

See, earlier, by Hubert Collins: From 80 to 60 Percent White: How to Lose a Congressional District, No Matter WHAT Kind Of Republican You Are 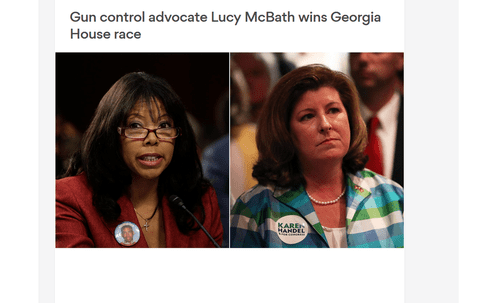 Before contemplating the reason the GOP lost the Georgia’s once-safe 6th district to a Democratic gun-grabbing, Leftist black woman, consider the mountain she had climb: nearly 40 years of unquestioned GOP control.

Newt Gingrich represented the district 1979-1999. Republican Johnny Isakson held the seat for two terms. Then Tom Price had it from 2004 until 2016, when he won re-election but vacated the seat to run the Health and Human Services Department for Donald Trump.

But then the Rocky Marciano of Ga. 6 relinquished his crown, trundled over to HHS, and turned the district over to Karen Handel, who barely beat her Democratic opponent in a much-hyped special election.

How did McBath win in a district that 24 months ago returned a Republican to office with 6 of 10 votes? It was a perfect storm, as the cliché goes, one of the components of which was, as I reported about the governor’s race, changing demographics. 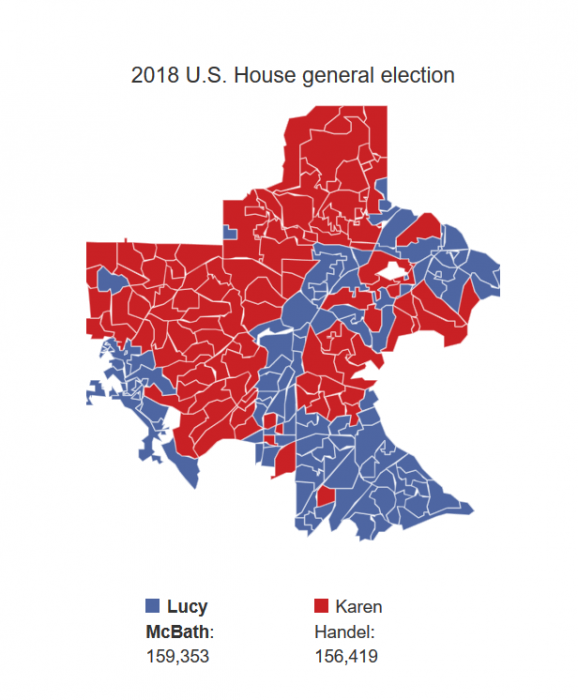 The demographic change in Georgia District 6 is incredible—but it doesn’t help matters that Handel ran a bland GOP consultant-type campaign (no mention of immigration) and significant number of whites apparently voted for McBath. Seventy percent of the voters in the district are still white [Lucy McBath, The Sixth District And A Wave Of Democratic Women, by Jim Galloway, Atlanta Journal Constitution, March 10, 2018]. Just as a minority of whites pushed Obama over the top in to Presidential elections, so too did they make the difference for McBath.[District 6 vote analysis by precinct, By Emily Merwin DiRico, AJC.com, pictured right]

Nevertheless, the ultimate problem is Georgia’s relentless turn to brown.

Mass non-white immigration and migration into the Peach State is replacing real Georgians. It nearly enabled the black radical leftist, Stacey Abrams, to win the governor’s race. And let’s not forget just how radical this gap-toothed “progressive” is: She wants to sandblast Lee, Davis and Jackson off Stone Mountain, the Confederate Mount Rushmore. [Abrams Calls For Removal Of Confederate Faces Off Stone Mountain, by Greg Bluestein, Atlanta Journal Constitution, August 15, 2017] ISIS, apparently, is her model for cultural enrichment. Just how bad is it and how close is Georgia to turning blue? About one election cycle away, reported Sunwoo Park (!) at the Emory Political Review:

Readers may question why some Democrats believe that Georgia can turn blue. This is mostly based on the changing demographics of Georgia. According to Politifact, 80% of Georgia’s new residents in the 2010 Census were non-white. This number is steadily rising as the state is projected to become a minority-majority state by 2025. Democrats are pinning their hopes on the growing minority communities and the fairly solid white liberal population of Atlanta to eventually overcome the conservative communities in suburban Atlanta and rural Georgia. Of course, Democratic expectations have been constantly inflated in the past; minorities, especially African-Americans, tend to vote in far lower rates than whites, which compose the base of the Georgia Republican Party.

It was still a question going into the 2018 race whether or not political newcomer Lucy McBath, the Democrat nominee, could do what $23 million of largely out-of-state campaign donations couldn’t do in 2017: flip the Georgia’s 6th District blue. [Georgia's 6th District Is Changing Fast, But That Doesn't Mean Democrats Can Flip It, NPR.com, 11-1-18].

McBath’s main campaign plank, by the way, was “gun violence.” You might remember her as the mother of the late Jordan Davis. In 2012, a white fellow, Michael Dunn, shot Davis to death during a parking-lot confrontation over the loud music Davis and pals were blasting from their SUV. The black youths provoked Dunn and threatened him, and yet another white guy was overcharged and landed in prison for life. Nicholas Stix wrote the story for VDARE.com. 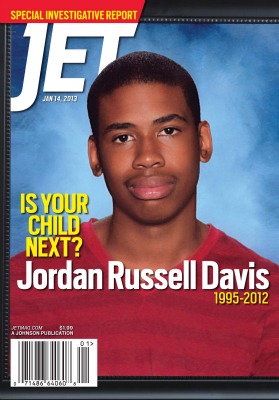 Thus did McBath become national spokesman and facewoman for Michael Bloomberg and his gunphobes—and a candidate for Congress. The gun-control movement’s sugar daddy’s Everytown For Gun Safety pumped an astonishing $4.5 million into her race. [A Lot Came Together To Help McBath Score Big Win For Georgia Democrats, by Tamar Hallerman, The Atlanta Journal-Constitution, November 9, 2018]

Amazingly, McBath had given The Talk to young Jordan before he provoked Dunn.

“I remember having that discussion with him telling him, ‘Sweetheart, because you're a young black male. You know, there are a lot of people in this world, in this nation that don't value you,’” she recounted. “‘And you have to be so careful where you go and what you do and who you talk to, because you know if you get into an altercation with anyone nowadays people will take their guns out, and they'll shoot you.’”

[Lucy McBath Refused To Be quiet After Her Son's Murder. Now She's Running For Congress, by Nicole Chavez, CNN.com, May 20, 2018]

Unhappily, she didn’t tell him that not everyone wants to hear his selection of music, and when someone asks him to turn it down, he probably should.

But back to the numbers.

Aided by extreme demographic change and the monolithic black vote (Abrams received 93 percent of all  black votes, and 97 percent of black women), McBath defeated Handel 50.5 percent to 49.5 with a slim 3,193-vote margin.

Observed an activist who backed McBath after supporting her primary opponent: “[t]he sixth is roughly 70 percent white—not exactly the vanilla suburban enclave it was when Newt Gingrich held the seat” [Stacey Abrams And Lucy McBath Are Leading The Charge To Turn Georgia Blue: With Two African-American Women Running In High-Profile races, Georgia Could Become The Next Virginia, by Joan Walsh, The Nation, July 27, 2018].

One interesting question: Would Tom Price have won again had he not departed for HHS—a position he resigned in scandal after just seven months [HHS Secretary Tom Price Resigns Amid Criticism For Taking Charter Flights At Taxpayer Expense, by Juliet Eilperin, Amy Goldstein and John Wagner, The Washington Post, September 29, 2017]?  Again, he had never dropped below 60 percent of the vote.

My guess: given the advantage of incumbency, Price well could have kept the seat. So Trump’s pulling him from Congress to run an unconstitutional bureaucracy probably wasn’t a bright idea. Congress—meaning political power—is what the GOP needs. Any old hack can run HHS.

But Price didn’t stay, and so we’re left with raw numbers that don’t look promising. Remember the darkening of Ga. 6: 80 percent white to 60 percent in 18 years. As demographic trends go, the district browned in a blink. So demography, as no less a personage than Bill Kristol has apparently belatedly realized, is destiny.

Let’s close with a few words about Gingrich, Prime Minister Emeritus of Conservatism, Inc., who represented the district for two decades, and rose from being an unknown history professor and neophyte congressman to destroy and replace Democratic House Speaker Jim Wright.[Jim Wright Dies at 92; House Speaker Resigned Amid Ethics Charges, By Adam Clymer, NYT, May 6, 2015]

Gingrich conceived the Contract With America—Contract On America, it was called by the Left—that didn’t work out so well. But although deposed after the GOP took a beating in the 1998 midterms, he became one of the most powerful “conservatives” in the country and ran for president in 2012. Though those years, Gingrich and Conservatism, Inc., terrified of the race question, unwisely ignored the National Question and demographics.

Gingrich didn’t get close to winning the presidency. And now, thanks to the numbers he and his Beltway Bund ignored, he very well might not be able to win his old seat in Congress.

The white residents of the suburbs of metro Atlanta will continue to seek momentary refuges in new white-flight towns. But they can't keep running forever (if they do, they'll end up being citizens of Alabama, Tennessee, or South Carolina).

Republicans, whether they like it or not, are the white party. Either they embrace this, or the GOP in Georgia—and nationwide—will become just as irrelevant as the GOP in California and New York.