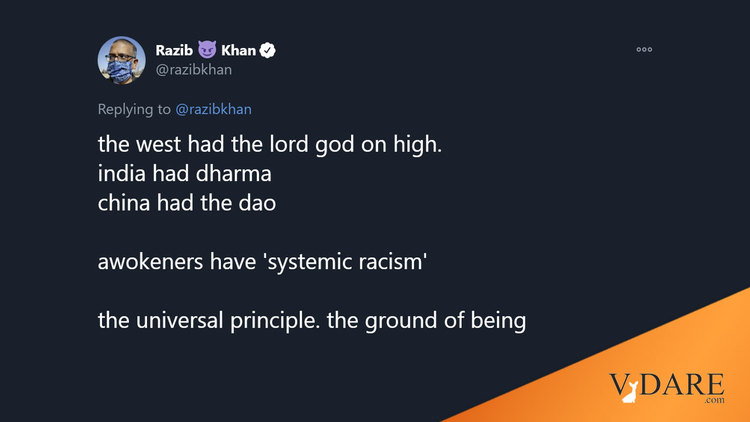 John Derbyshire On “Systemic Racism,” The Patriarchy, And Rushton's Rule of Three.

Earlier by Steve Sailer: Biden Vows To Rip Out Roots Of Systemic Racism, i.e. Seize The Equity In Your Home

You have surely heard the phrase "Systemic Racism" recently. What is it, though? 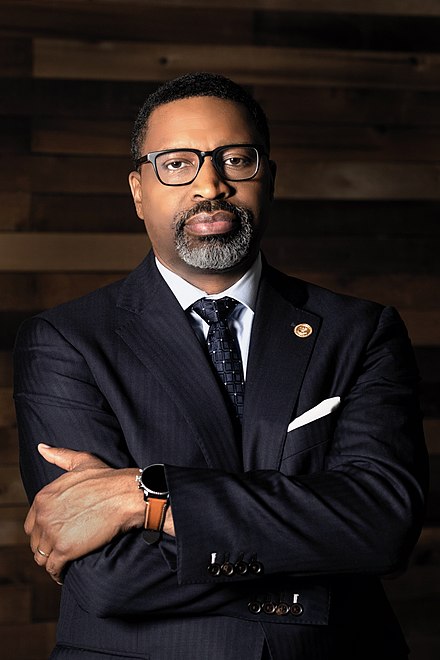 A friend has directed my attention to a speech by Derrick Johnson, [Tweet him] President of the NAACP, back in June in the heat of the George Floyd riots … I beg your pardon: the George Floyd mostly peaceful protests.

systems and structures that have procedures or processes that disadvantage African Americans.

What is systemic racism? Here's what it means and how you can help dismantle it

If that's Systemic Racism, then I guess all the "systems and structures that have procedures or processes that advantage African Americans"—Affirmative Action, government set-asides, huge over-representation in advertising and show business, endless excuse-making for black failure, rewriting of history to make white Americans the villains—must be "Systemic Anti-Racism."

Why don't we hear that phrase more often? 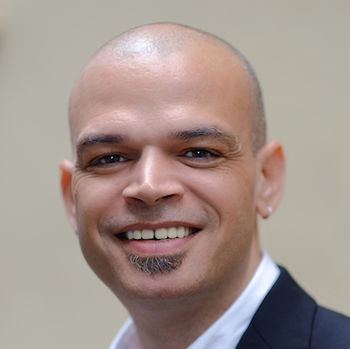 In the same news story another respondent, Glenn Harris [Email him] president of something called Race Forward, offered his definition:

…the complex interaction of culture, policy and institutions that holds in place the outcomes we see in our lives … Systemic Racism is naming the process of White Supremacy.

If you can make any sense of those, you're smarter than I am. I think Razib Khan got much closer to the truth in a December 23rd tweet: 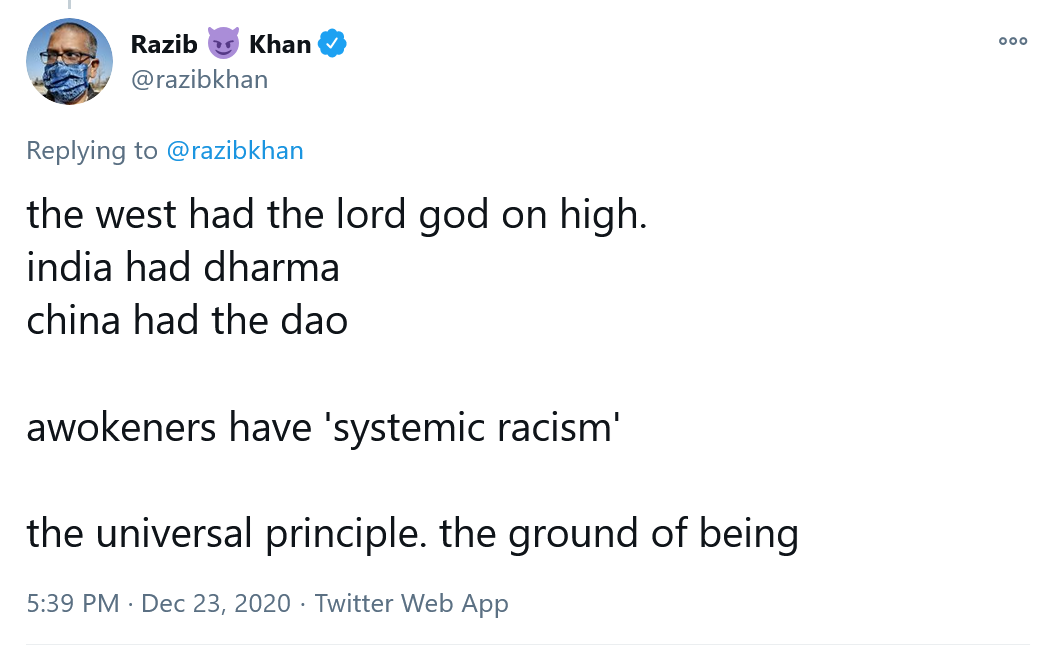 There are some problems with it, though. Why is it only blacks getting disadvantaged? I'm looking here at a long piece on the Quillette website, A Peculiar Kind of Racist Patriarchy,  December 22nd, by Rav Arora. He notes that newly released statistics from the U.S. Department of Labor for the third quarter of 2020 show that Asian women have now have higher weekly earnings than white men: median figures $1,224 for Asian women working full-time against $1,122 for white men. That puts the Asian gals ahead by nine percent.

As the author points out, that doesn't raise issues just about the "Systemic Racism" narrative, but also about the so-called "patriarchy." If whites are so maliciously oppressing other races, and men likewise oppressing women, how do we get numbers like these? 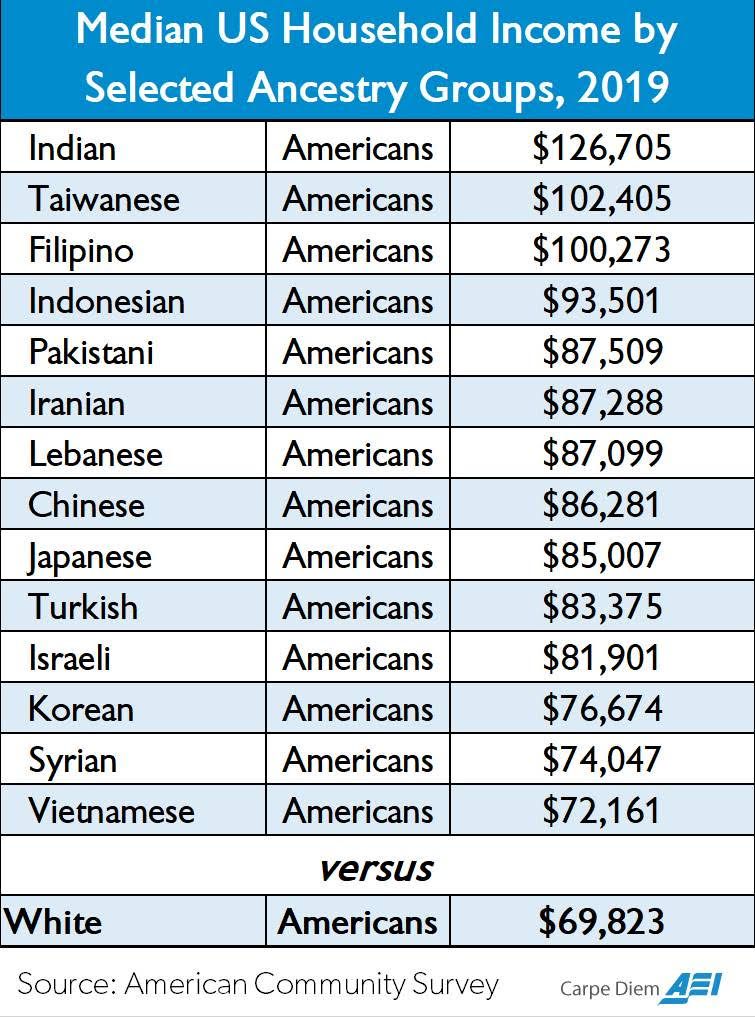 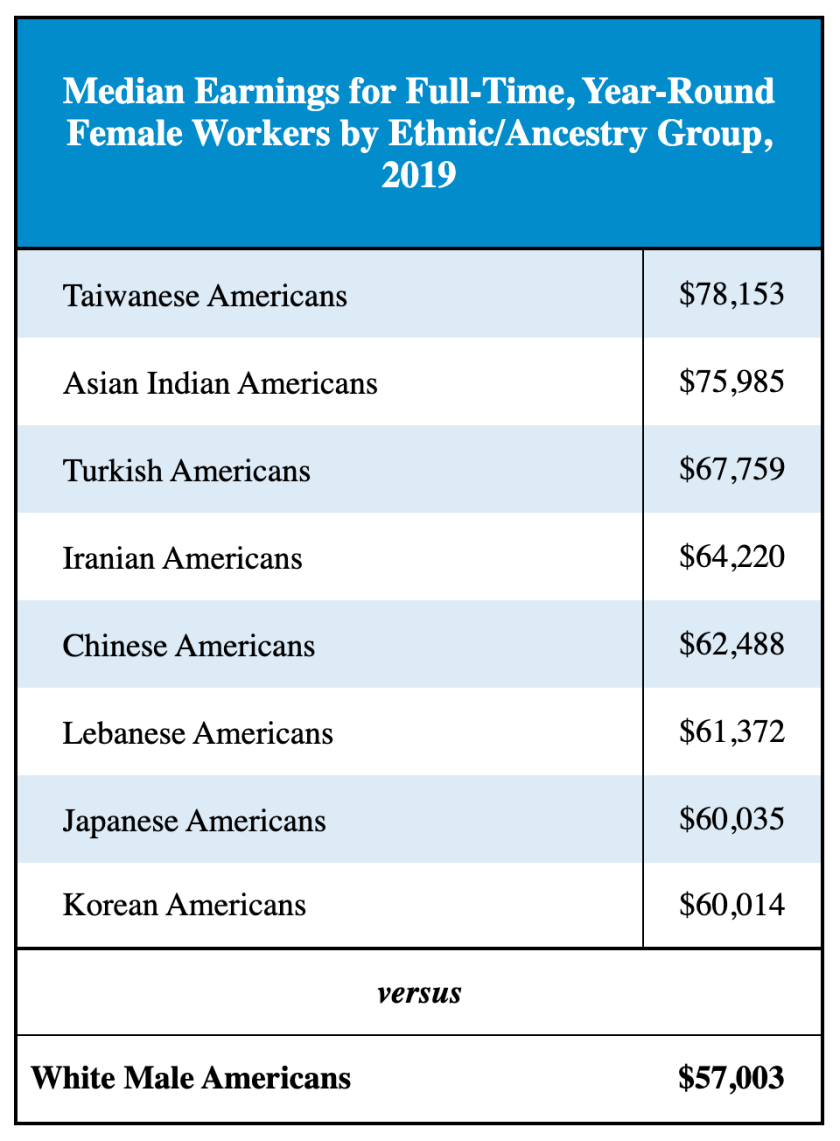 The lowest figure there, for female Korean-Americans, is a tad over sixty thousand dollars. White male Americans? A tad over fifty-seven thousand.

That's a lot of people doing better than us white folk. How does Systemic Racism make that happen? What happened to our White Supremacy?

I wondered if Mr. Arora would venture into race realism, but of course he didn't.

It's culture, you see, just culture—a concept hardly any more substantial, far as I can see, than "Systemic Racism."

If you subtract out the effect of recent and highly selective immigration, which accounts for the Indians, Turks, and Israelis—and also, come to think of it, for recent black African immigrants, who also do well—you're left with Rushton's Rule of Three: the principle stated by the late John Philippe Rushton that on a whole host of physical, psychological, and behavioral traits, you can rate East Asians, whites, and blacks as high, middling and low.

I don't think Rushton's Rule of Three rises to the level of metaphysics. But as a close description of what the human world is actually like, it is way better than "Systemic Racism," and much more interesting.