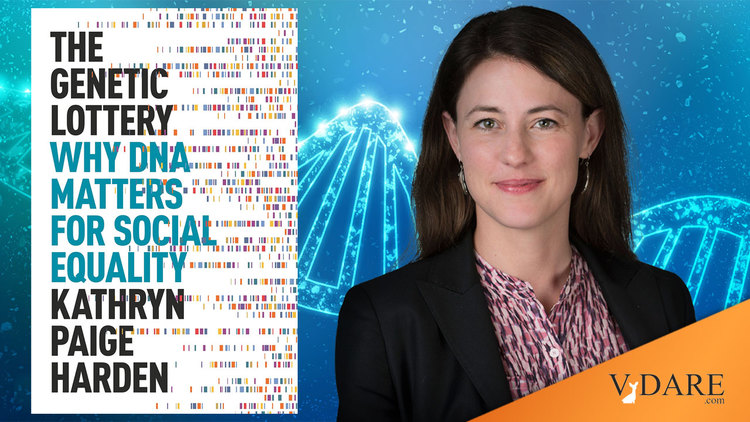 Behavioral geneticist Kathryn Paige Harden’s book The Genetic Lottery: Why DNA Matters for Social Equality has been much anticipated by scientists worried that the dumbing down of discourse in the name of diversity might eventually get their funding cut.

After years of trying out on the science conference circuit her arguments for why the Woke shouldn’t be so anti-genetics, The Genetic Lottery is finally here. It turns out to be an elaborately contrived triple-bank-shot attempt to head off growing Ibram X. Kendi-style science denialism by claiming that ignoring the influence of genetics upon human differences just enables the Real Bad Guys, led by archvillain Charles Murray, to easily dunk on the libs:

When social scientists routinely fail to integrate genetics into their models of human development, they leave space for a false narrative that portrays the insights of genetics as a Pandora’s box of “forbidden knowledge.”… Why would we want to hand people opposed to the goals of social equality a powerful rhetorical weapon, in the form of a widely prevalent and easily understood methodological flaw in social research?

You see, extremists like Murray are right about the science—well, except for the part about genetics probably contributing to the IQ gap between whites and blacks. That’s totally wrong. Totally.

Or at least it’s not proven yet.

Or, if Murray is right, that just means white Americans must pay more taxes to compensate for the genetics of blacks:

Or something. The Genetic Lottery is all over the map.